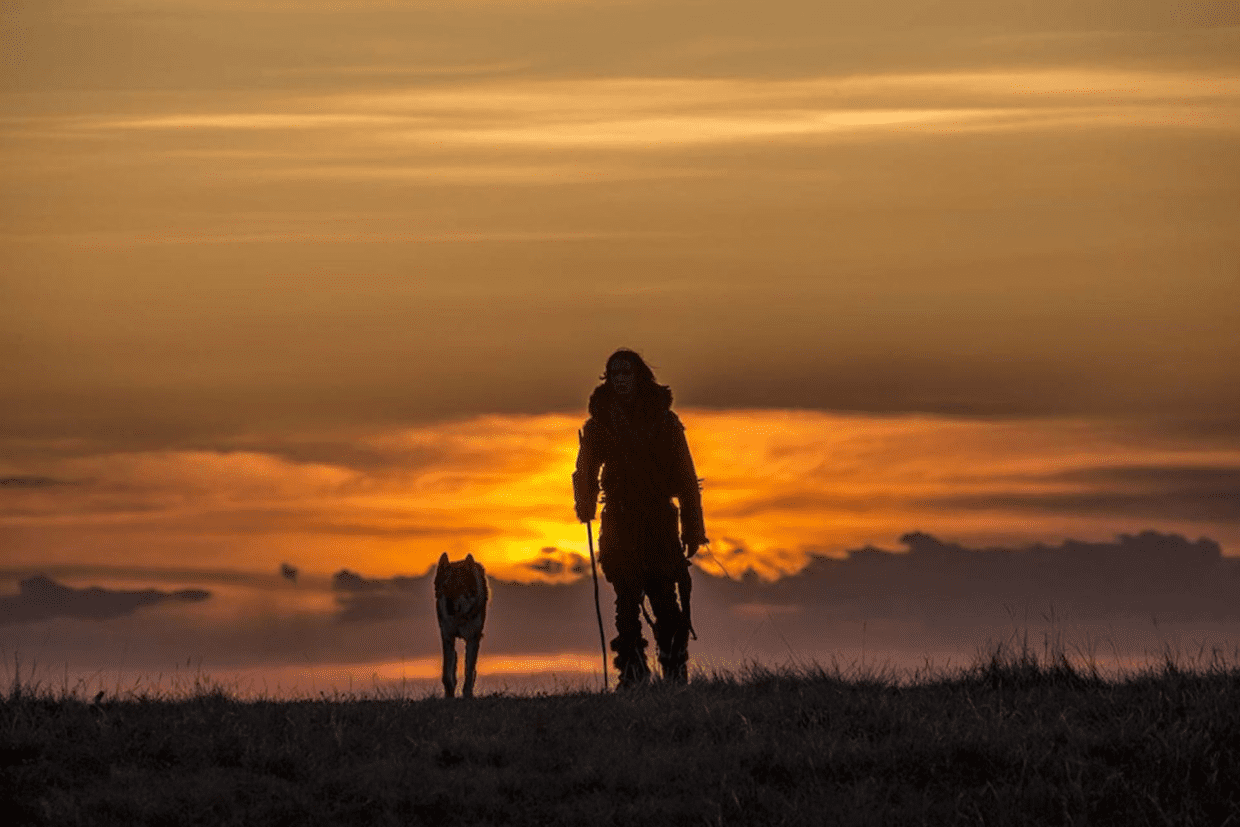 Alpha: Not Your Average Stone Age Film (A-)

Films about the Stone Age are few and far between. Movies that do makeup the limited genre range from low-budget cult classics (Clan of the Cave Bear) to derivative, action-packed fantasy (10,000 BC), and a common element that I felt was missing from most of these was a sense of grounded reality. I expected similar qualities when quickly skimming through Alpha’s trailers, another ‘man’s best friend’ tale with some vague prehistoric plotline, next. However, I was pleasantly surprised. Alpha begins in a cold open; nature centric, serene sequences of the landscape abruptly give way to the violent end of a bison hunt where leading actor Kodi Smit-McPhee plummets to a seemingly untimely demise. Alpha’s intense introduction hearkened to the vivid dynamics present in Cecil B. Demille films, and I was slowly realizing this wasn’t the lovey dovey dog movie I had thought it was.

Following this dramatic opening, we get treated with some backstory, which provides character development. At face value, the primitive rankings of the Solutrean tribe are founded on toughness of personality and trust amongst one another, and only the strong-willed are capable of participating in “Hunting the Horned Beast.” Titular protagonist Kedi (Smit-McPhee), the son of the tribe’s leader, is ironically the polar opposite of these ideals, as he “leads with his heart, and not with his spear.” Unlike the other warriors of the tribe, Kedi is compassionate and thoughtful, and just as much as he wishes to prove to his father that he is a headstrong warrior, he wishes to keep his emotional complexity intact.

Kedi’s maturing relationship with the wolf he dubs “Alpha” is one of the most finessed aspects of the film. Following his brutal run-in with the bison, a wounded Kedi is almost subject to becoming a tasty morsel to an oncoming wolf pack, though he manages to scare them off in the nick of time by wounding one of their pack members. Luckily for us, his aforementioned need-to-care allows him to spare the life of his foreshadowed wolf buddy. Surprisingly, director Albert Hughes doesn’t exploit the “lovable dog friendship” moments that could have easily been repetitive in the film. Kedi starts his confrontations with the mutt by tying its mouth closed, feeding it worms, and occasionally depriving it of amenities in order to establish his dominance in the relationship. The subsequent respect and partnership the two then share comes off as gritty realism as opposed to fanciful fluff, something canine-centric movies occasionally rely on. This instinctive bond between boy and beast is what manages to drive our protagonist to return to his tribe, preserving his and Alpha’s survival.

Aside from the plot, Alpha showcases truly mind-blowing cinematography. The action-packed bison hunt, vultures attempting to snap at Kedi’s unconscious body, the cinematic zoom-in as one of the tribesmen centers his focus on an animal herd while not diverting his attention to the ants crawling on his arm— all were brilliantly captured. The movie’s visuals also made the audience feel like they were part of the movie. Most of the people watching next to me were on the edge of their seat as Kedi crafted a makeshift splint out of frosted wood and dirt, or when Kedi’s father shared his ancestral stories in a fictional but well crafted language.

Alpha’s primary fault was its lack of twists and an overall predictable, linear story. There are no incredibly divergent twists from what one would expect, and the film rides on the simplistic outline of survival. I was hoping for a little more depth, but the movie itself was able to be effective enough to enjoy.

Overall, Alpha probably won’t be regarded as one of the greatest movies of 2018, but I can definitely say that I enjoyed the hour and a half movie. I would personally recommend Alpha for anyone who’s into great looking scenes and lovable canines.