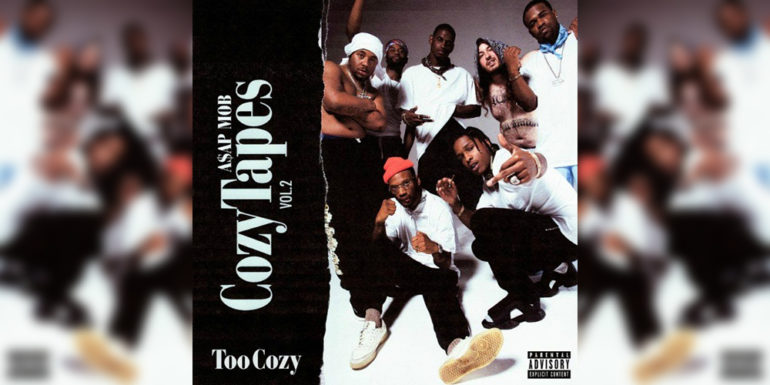 A$AP Mob celebrates their lavish lifestyle on “Cozy Tapes Vol. 2”— while not taking things too seriously

A$AP Mob’s “Cozy Tapes Vol. 2: Too Cozy” awakens the side of you that just wants to flex on your own success with no shame. Even from the song titles —“Please Shut Up,” “Blowin’ Minds,”“Walk on Water,”— you can see that the Mob believes themselves to be the most godly and elite. They take full credit for their success, dismissing any one who does not run with their crew. The album is explosive and brash, yet, in its softer tracks, celebrates brotherhood and affection. The tracks evoke an image of a large group of friends vibing in a small studio, huddling over a laptop, all combining their individual visions and beats into a disarray of verses.

The project seems overwhelming at first. Each of the 17 songs is stacked with many different artists, and most of the artists have short verses. In order to integrate these tracks seamlessly and create a uniform album, the A$AP Mob included three skits, one at the beginning, one in the middle, and one at the end. The skits are based off the A$AP Mob’s imaginary high school, “Yamborghini High,” a name which pays homage to their late member A$AP Yams. The album follows a back-to-school theme, fitting for its late-August release.

It starts off with “Skool Bus,” a skit by Donterio Hundon, who is an Instagram-famous comedian known for roasting celebrities. Hundon roasts kids on his school bus, making fun of their outfits. The skit ends with Hundon saying “I’ll graduate one day, goddamn it,” and the sound of a school bell.

Next on the album is the first song, “Perry Aye,” which features Jaden Smith’s distorted and lowered voice on the chorus. A$AP Rocky is a fashion fanatic, so it is fitting that Smith, a young fashion revolutionary who challenges gender stereotypes by wearing dresses, is included in the album. The track also features quick classic verses from Carti, Rocky, and A$AP Nast.

The fifth track, “Black Card,” is definitely one of the most unique songs on the album. The contributor who makes it stand out is 15-year-old Bronx rapper Smooky MarGielaa. He raps with a playful, auto-tuned voice, and has a style similar to Lil Yachty and other “bubblegum trap” rappers. “BYF (Be Your Friend)” has a softer, emotional vibe with a slow beat and gentler rap. MarGielaa again raps with a lighthearted tone, and Rocky sings the chorus of “I just wanna be your friend” in a high pitched voice.

Chill, slow songs like “BYF” are placed directly before hard raps like “Get the Bag,” reflecting the versatility of the A$AP Mob.

Placed in the middle of the album, the skit “Principal Daryl Choad” is a recording of the principal’s loudspeaker announcement at Yambourgini High, and seamlessly leads into one of my personal favorite songs on the album, “Frat Rules.” Big Sean and Rocky’s verses work well together with Carti’s chorus. Their musical chemistry shows when they perfectly interrupt each other’s verses, feeding off of each other’s ideas over a heavily-layered production. “Feels So Good” is an A$AP-heavy track, mostly about the wealthy, famous lifestyle they live. Rocky sings in a high voice: “Cause it feels so good when it’s new.”

The last song of “Too Cozy” is the hit single “RAF” which came out May 15. The song features verses from Rocky, Quavo from Migos, Lil Uzi Vert, and Ocean. The artists rap at a fairly fast pace, but Ocean slows it down towards the end. Ocean has the longest verse on this version of “RAF,” while the other released version leaves out the beginning of Ocean’s verse. By starting the album with fashion comedy in “Skool Bus” and concluding it with “RAF,” a listener can see that fashion is a major subject of “Cozy Tapes Vol. 2: Too Cozy.” The “RAF” music video, which was released on July 24, shows Carti, Quavo, and A$AP Rocky modeling outfits from the Raf Simmons fashion line.

The last track, “Last Day of School,” is another loudspeaker announcement from the principal. He concludes the album saying, “You’re adults now. Love each other, lift each other up.”

Whether the A$AP Mob intended to direct this project to its youth fans or not, the themes of growing up, brotherhood, and loyalty stay constant through the skits. Meanwhile, themes of money, women, and expensive cars appear in most of the songs.

In “Cozy Tapes Vol. 2: Too Cozy,” the A$AP Mob succeeded in incorporating its lesser known members; we hear more from A$AP TyY, Nast, and Twelveyy. The project does not sound like A$AP Mob was trying to create a serious album; it is more of a fun album that a group of friends created. If there is anything to take away from this project, it’s that the A$AP Mob produces catchy beats that are perfect to rap over. Overall this project was yet another successful endeavor for the A$AP Mob, and, while it is collaboration-heavy, the songs flow together as a unit.