A Spring Rally? A Pleasant Surprise!

Everything from a dance team show, a staff golf cart race, and next year’s 12th man announcements made our beach-themed spring rally an unforgettable one. 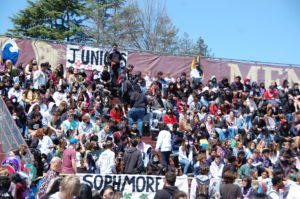 Seniors and juniors sit up in the stands while underclassmen sit on the track.

Many students were greeted with the surprise of the first period starting at 8:50, instead of the usual 8:55. It could only be one thing: a rally schedule.

Shortened class periods led up to the rally, starting right after fourth period and before lunch. This year’s rallies have been hosted outside on the football field due to COVID-19 precautions.

Students, beach balls, and leis speckled the bleachers and track as the rally commenced with a sparkling performance by the varsity dance team. They featured songs like Industry Baby by Jack Harlow and Woman by Doja Cat. Then, just as they did in the dance show, boys that wanted to be a part of the show joined in and did partner dances with each member of the dance team.

Varsity dance team member, junior Audrey Thomas said, “performing at the rally was really exciting, especially since it was our last time dancing with the seniors and our last school performance of the year.” 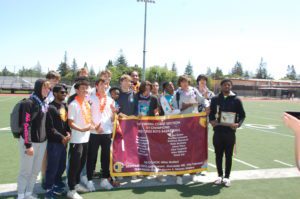 Next up, the long-awaited new 12th man was finally announced by current 12th man members. They literally “passed the torch” to Juniors Rebecca Schulman, Kai Shahani, Kate Nelson, Jack Scarborough, Phoebe Gerhard, and Ishita Mishra. We can’t wait to see what’s in store next year. Follow them on Instagram, @ma12thman! 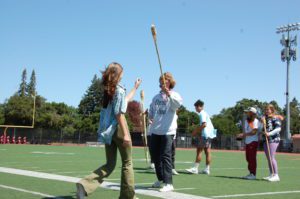 Shahani says, “It was sick to get picked for 12th man, and I can’t wait for amazing games senior year.”

Afterward, there was a quick tug of war match with the right side team dominating the left, and even ended up dragging some students to the floor! Then, Mishra announced campus aid superlatives, like Who was most likely to be on Dancing with the Stars? Ms. Dixon won!

The campus aids then faced off in an intense golf cart race. Five golf carts and campus aids were lined up at the 30-yard line on the field. The faceoff began with a pretty even race, but as they reached 40 yards, campus aid Sam Stevens gained incredible speed and beat all of the others by a long shot. All of the aids followed in their carts as he did a victory lap around the track. 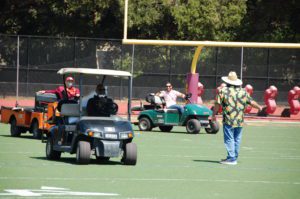 Campus aids line up for golf cart racing on the field.

Next, the leadership announcers honored our Robotics Club and their robot, Dwayne the Croc Johnson, who did a demonstration of throwing a ball on the track. M-A’s journalism program was shouted out for being awarded Pacemaker finalists, and our drama program was congratulated for all of their outstanding work this year.

Finally, at the end, leadership advisor Michael Amoroso gave a quick heartwarming speech commemorating campus aid Sam Stevens for the 25 years of incredible care and service that he has put into M-A and expressed how much students will miss him after he retires this year. 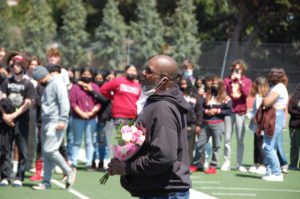 Amoroso handed Sam a bouquet of flowers, and students gave him one last standing ovation. Stevens said, “I appreciate you all, I’ll always treat you as my children. Keep pushing forward, don’t stop.”

The uplifting and spontaneous rally ended on a sentimental note, but really took the time to acknowledge M-A’s shining stars and gave students an exciting Friday and a refreshing break from class time.

Mishra said, “It was a lot of hard work to pull it off given like 3 weeks’ notice, but we made it work and it was very satisfying.” Thank you leadership!