A New Caliber of Canning 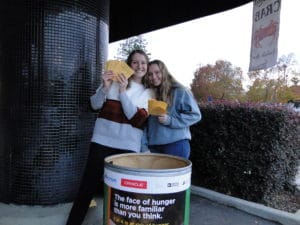 As M-A’s Canned Food Drive comes to a close, many a student will head home happy, knowing that they have helped, even if in a small way, combat hunger in the Bay Area. A couple hour shift here, a monetary donation there, maybe even going above and beyond by canning for multiple sessions. A very average turnout for very average students. Senior Christiana Young and Freshman Kathleen Tiznado aren’t your average students, though. Both spent 100 hours canning over the course of the Canned Food Drive, outdoing the previous record by more than 15 hours. That averages out to be 2.6 hours a day, every day, for the month long drive. 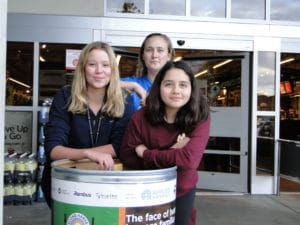 To most high school students, such persistence seems herculean. But for Young and Tiznado, it appears to come naturally, the thought of helping their community enough to inspire sacrificing a large part, if not all, of their free time. Last week, I had the pleasure of speaking to both of them about their efforts, as well as see them in action– or more accurately, their natural habitat for the last month.

How many hours do you have?

Did you initiate this yourself?

Young: “Yeah. It’s my senior year, and I’ve been doing the Canned Food Drive all four years, so I wanted to end it with a bang. I kind of said that I wanted to do 100 hours, and then I didn’t want to settle for less, so didn’t give up on it, because I would be mad at myself if I didn’t get it.”

Young: “After school, I get in the car, and I get to go to canning every day. Normally, I go from four to six, and then I load them up into my car, and go back to M-A every night, and count them. I’d rather count them at night than do it before school the next morning. I do a lot of lifting.” 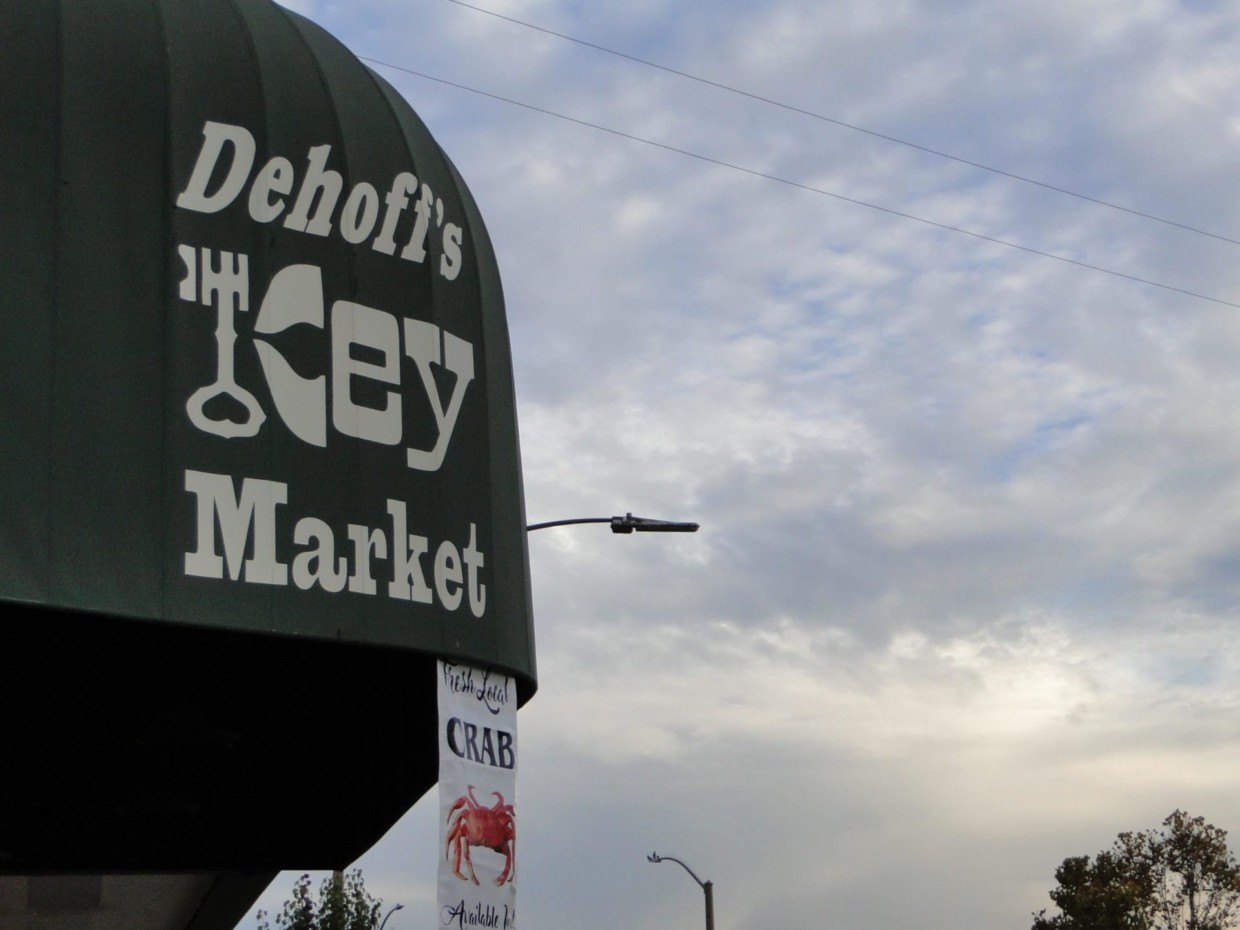 Key Market in Redwood City, where Young does most of her canning.

Did you come up with this together?

Tiznado: “Well, eventually, Christi egged me on. She was like, ‘well I’m going for 100 hours!,’ so I decided if a senior who still hasn’t written any of her college applications can do it, as a freshman, I can totally do it.”

Is it a little competitive between you two?

How much food have you raised so far?

What has been your longest day of canning so far?

What is the general breakdown in daily hours for you?

Tiznado: “So, weekdays, I’ll get an hour in whenever I can, but during the weekend, I try to do as many hours as possible without, you know, not getting my homework done.”

How do you stay motivated through your longer shifts?

Tiznado: “It really just depends on where you are; I just use my own little mental formula to find out where to go. So, right after school, Safeway seems like a good place to go…some parents come in with their kids and, you know, you get a lot of people coming in and out.”

You mentioned a “mental formula.” Could you expand on that?

Tiznado: “Sundays, right around twelve, until, like, two or four, that seems like the best time to go, because people are coming from church, or getting their weekly groceries. It’s also right around lunch, so when people start to get hungry, they come to get food.”

Do you ever have to interact with less than friendly people?

Young: “Oh yeah, for sure. There’s this woman who tells me that me collecting cans is raising the price of food stamps, and, you know, hurting the economy. There’ll just be situations where I have to deal with people, because none of my friends want to. I just put on a brave face.” 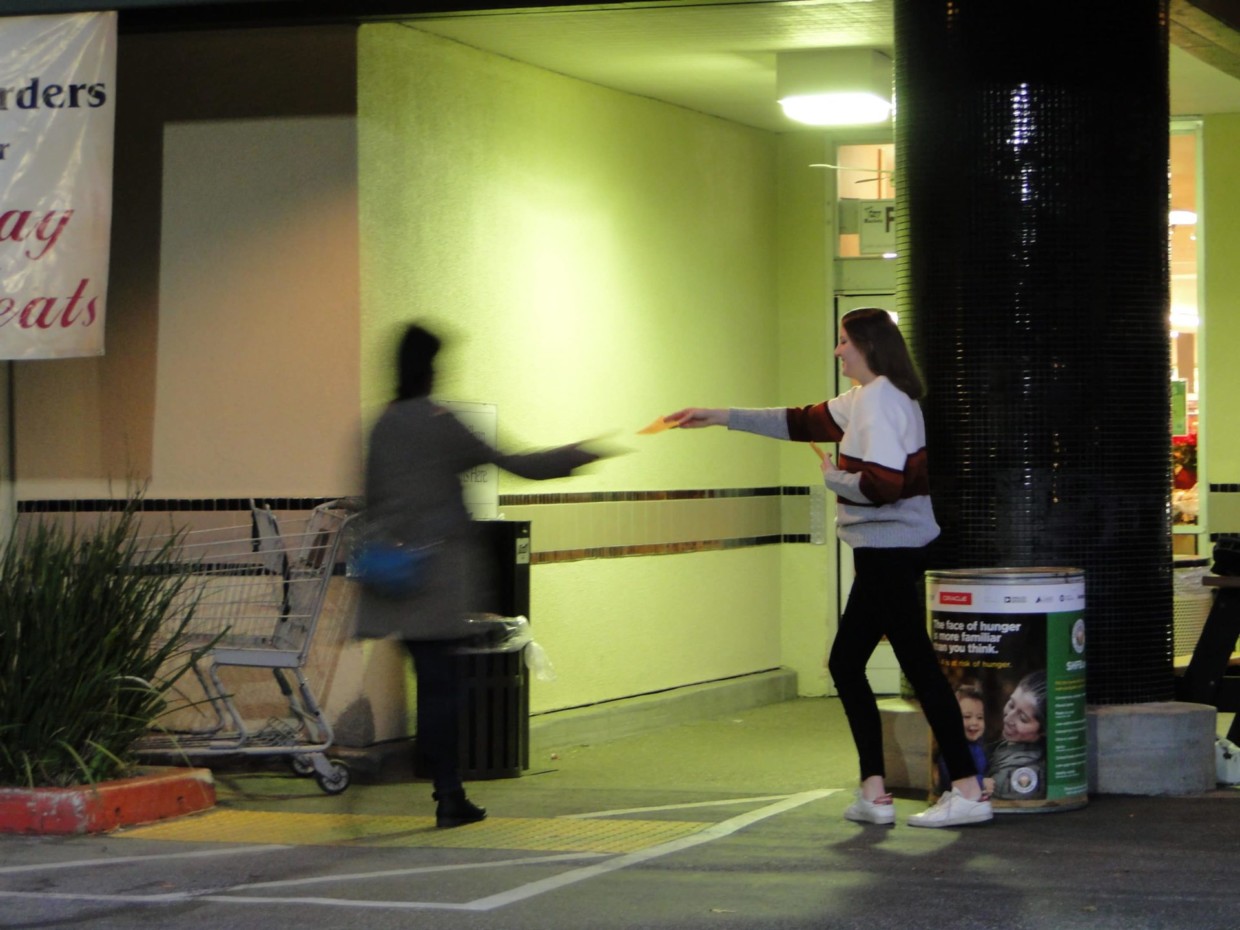 SNAP (Supplemental Nutrition Assistance Program), or formerly the Food Stamp system, is an entirely Supplemental program that helps provide over 40 million families with an opportunity to build an adequate diet. Additional food provided by can drives does not detract from it in any way; in fact, the average family receives the equivalent of only $126 a month from SNAP, not even enough to cover the “thrifty” monthly plan of $570 set by the USDA. For many, a drive like the Canned Food Drive is an essential service, one that is needed in addition to the SNAP system.

What has been your favorite moment canning so far?

Young: “Ok, there are two moments. This little boy, not even as tall as the barrel, walked up to the barrel with cans, and he dropped them in, and he was like, ‘Is this going to go to the hungry children?,’ and I was like, ‘Yes, it is!,’ and he was like, ‘Oh, good! Have a good day,’ and it was so cute, and made me so happy. Another time, we were at Safeway, and these two old ladies walked in, and just decided to buy two whole carts of cans. They spent, like, $300 just on cans. They called us inside to help them load up their bags with them, and I got their emails so I could send them pictures from distribution day.”

Tiznado: “For me, a high point is every time I get a can. Definitely whenever people are super happy to donate, like they’ll put their whole cart into one of the bins. Nothing specific, just if they take the slip, even if they forget to get something on the way out, it is just good to see that people are thinking about the drive.”

What made you want to do this?

Young: “I just want to feel like I did something my senior year that I love. Distribution day is my favorite day of the year, so I just wanted to do something with that. I just hope to…make a lot of connections at distribution day, and get to see. There are some items of food I get– like a little container of honey I got– that if I just see at distribution day and hand it to a family, it’s going to make me so happy.”

Tiznado: “My sisters were both in leadership, so I really got to enjoy canning from the beginning. I always heard nice stories, like ‘oh man, this person walked out with a cartful of food,’ and it always made their day. I just always really liked those moments. I’m a freshman, I’ve got plenty of time on my hands, I can totally do this.”

Any advice you would give to someone trying to beat the record next year?

Young: “Space it out, because you’re not going to want to do, like, 50 hours in the last week. I went canning on the first day, Halloween, and don’t stop because you know if you miss one day, you are just going to have to do double the next day. Also, don’t do it as a junior or senior, because it gets really rough. If you want to break it, do it freshman or sophomore year, because I have nine college applications due this month as well.