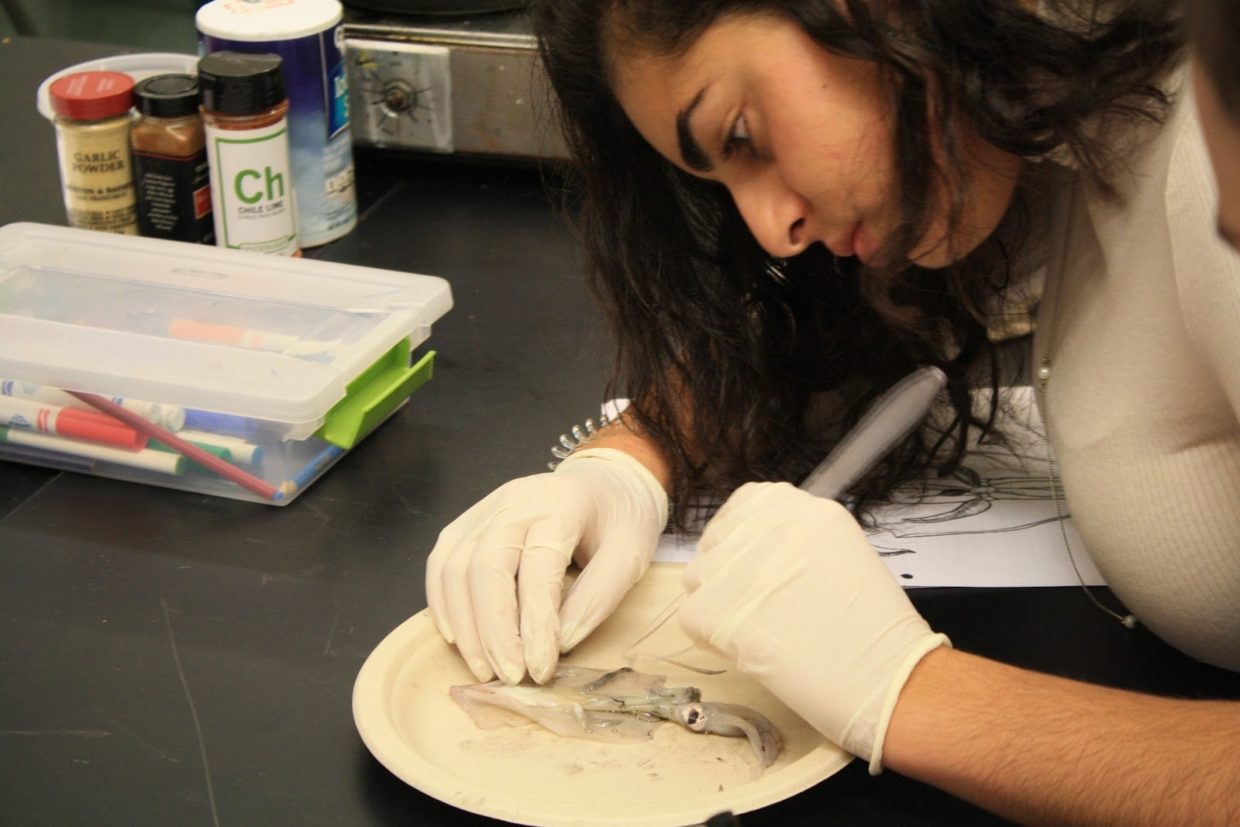 A Look at M-A’s Animal Dissections

Even if you’re not in AP Biology, you’re probably aware cat dissections are currently wrapping up, and if you’re a junior or senior it’s not an uncommon occurrence for a classmate to stride through the door proclaiming their hands smell like formaldehyde and insist that everybody else smell them too. Despite the excitement that the animal dissections generate among students, either because they are grossed out, fascinated, or a little bit of both, animal dissections have become a controversial subject concerning the ethics of the practice. Before we judge whether animal dissections are cruel or educational, it’s important to be aware of where the specimens come from and weigh the benefits and drawbacks of virtual alternatives.

The cats used in the AP Biology class come from kill shelters.  “Because of the huge problem with irresponsible pet owners not spaying or neutering their cats, there’s a constant influx of cats into animal shelters. Unfortunately, adult cats are rarely adopted and ultimately wind up being euthanized. Those animals’ bodies either wind up in landfill, cremated or used for education,” explained AP Biology teacher Patrick Roisen. For a time, the supply of cats for dissection decreased because of the increase in no kill shelters; however, once those shelters became overcrowded as well, the excess cats were relocated to regular shelters, where they, unfortunately, do get euthanized if not adopted.

The freshman biology class dissects fetal pigs. When a pregnant pig gets slaughtered for meat, the fetuses are either thrown away or preserved to be used in dissections. In Human Biology, students dissect organs from sheep and cows including an eye, brain, heart, foot and kidney. These body parts are byproducts of the meat packing industry. “We don’t typically eat those parts. One of two things happen as these animals are going to slaughter for food. They can harvest the organs and then they sell them to biological supply companies and we use them, or they basically get ground up and become part of a hot dog,” said Human Biology teacher Nancy Day.

In Marine Biology, students do multiple dissections, including a sea star, clam, squid, and fish. The squid is bought fresh from a local market and after the dissection, the class cooks it up to make calamari. The other specimens come preserved from Carolina Biological. However, Marine Biology teacher Erika Shepard said, “Honestly, the company is not very clear about where the specimens come from and I do not plan on buying more for future years because recently, I saw new evidence that suggests the collection process is causing significant harm to ecosystems.” Shepard has enough specimens to continue the dissections for next year and plans on using virtual or paper dissections in the future.

The kinesthetic aspect of actual dissections are invaluable to students’ learning. “It really helps because you get to see everything that’s actually going on and how they work together. It’s something that you just couldn’t get from a PowerPoint or a lecture,” said junior Jake Ekoniak, about the cat dissection.

Senior Joanne Yuh said that textbook diagrams simplify and organize how organs are arranged in the body, so dissections help students realize what the real body looks like. “In reality, organs are all crammed together. So when you do a dissection, it’s easier to understand how they are located. When you’re learning about the muscles in the cat dissection, it’s so much easier to understand how everything moves and functions because if you pull the arm you can see the muscles moving.”

Roisen explained that the virtual dissection options that he’s seen don’t provide the same level of depth as real dissections. Shepherd felt similarly, adding that many virtual dissections are costly. “Already in the first couple of days, even though it may seem self-evident, several students have been learning that the structures in muscles that they’d dutifully labeled in diagrams and memorized called ‘fascicles’ are actually visible and allow them to tell the difference between muscle tissue and connective tissue, as well as identify the division between neighboring and overlapping muscles,” said Roisen.

“Through the dissection, students are getting an incredible learning experience, perhaps inspiring some of them to consider a career in medicine or veterinary care. I also make a point at the start to emphasize how important it is to be responsible owners and spay and neuter their own animals,” said Roisen.

“I wanted to go to the STEM fields because my parents are engineers. I really love hands on activities, and dissection introduced me to surgery and inspired me to pursue a medical path,” said Yuh.

Despite the educational benefits, animal dissections can be upsetting for some students. “I knew I wasn’t going to be able to handle it, even before I started the pig dissection. I emailed my teacher and she told me that I should still try it. And I was just crying the entire class period,” said junior Sam Rader. “Industrial farming as a whole just really messes me up.” Rader was able to finish the lab using a virtual dissection, but since the virtual dissections for freshman biology are done in the library, there was no way to ask clarifying questions.

All of the biology classes have alternate dissections except for Human Biology. Day explained that her class is an elective course, and since the entire focus of the course is human body systems, dissections are paramount to understanding those structures. Roisen noticed that his students who opt for virtual dissections often perform worse when tested on identifying different body parts compared to students who participate in the dissection.

Dissections are an important asset to the classroom environment; however, the most important factor is whether the specimens are ethically sourced. Day mentioned that rabbits are popular for dissections, but most of the time they are bred by suppliers for that purpose, and that is why she does not use them in her class. For the most part, M-A’s dissections take advantage of animals and organs that would otherwise go to waste.