Editor’s Note: Due to Kathryn’s dementia and the similarity of last names, all subjects are referred to by their first names.

On February 22, 1917, a girl by the name of Kathryn Munroe was born in Savannah, Missouri. 99 years later, she lives here in Menlo Park, where she continues to love and be loved by the community around her.

Kathryn has only love for the members of her family and community, which has led to the positive impacts on Menlo Park. She was an extremely active member of the Rebekahs, a charitable organization focused on helping anyone in need. She helped start an orphanage, as well as a home for troubled children with the foundation, as well as raising money for them money through sales of various baskets and hand-embroidered items. Through her advertisement of the foundation’s principles, as well as her participation in making items for the sales, Kathryn displayed her kindness towards those she did not even know.

Kathryn was born the 10th of 13 children, and the youngest daughter of Lydia Fields and James Munroe, who was named after the fifth president. Growing up, her family was very poor, as her parents previously had very tough lives.

Her mother, Lydia, was illiterate and hadn’t received any education. Around the age of 17, she was left to fend for herself. Lydia’s father left the family when she was a baby, and her mother could no longer care for Lydia or her brother by the time they reached their late teens. In order to survive, she ended up becoming a housekeeper for wealthy families.

While housekeeping, Lydia met the father of her first child, Rosie. Unfortunately, Rosie was conceived out of wedlock, and due to her lower social status, Lydia was not allowed to marry Rosie’s father.

Soon after, Lydia met James, a man 20 years older than her, who had previously struggled with alcohol addiction. Though he was sober at the time of their marriage, he struggled with lifelong health problems because of his prior abuse of alcohol.

Despite their troubles, they had a happy relationship and had 12 children together. During her childhood Kathryn was the only daughter to live in the house; her nine older siblings had already left home. Because of the number of children in the Munroe family, Kathryn became an aunt before she was born, as her 17-year-old sister had a child while their mother was pregnant. 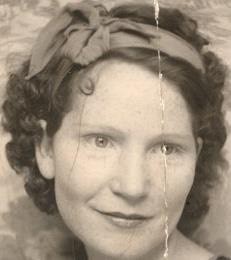 Kathryn Martin in her early years.

The Munroe family was very poor during Kathryn’s childhood and moved frequently to accommodate James’ constant shifting of jobs. Kathryn would walk to school, despite the holes in her shoes and the cardboard filling the soles, no matter how far the school was from her house. She would polish her shoes daily to keep her family’s poverty a secret, but eventually her schoolmates noticed.

Her brothers were teased for having to wear girls’ shoes and Kathryn was teased for the food she ate. Growing up, their family had only biscuits and noodles, with jam as an extra treat on special occasions. There was also the added treat of a jar of peanut butter for the entire family on Christmas, replacing the traditional presents most families receive.

In the 1930s, high school was technically free, but in order to attend students had to pay for their own textbooks. The Munroes couldn’t afford such a luxury, but Kathryn wanted to continue her education. In order to overcome her family’s instability, both with money and the constant moving, Kathryn asked her family’s landlords, the Wigginses, if they would provide her with a home and money for books.

At first, the Wiggins family denied her request. Kathryn became extremely discouraged, even going so far as to denounce her religious background. Kathryn and her family had always been very Christian, but when she received the news that she would not be able to go to school, she remembers thinking, “Now I know there’s not a God because if there were, he would have helped me.”

Fortunately, Kathryn did not have to wait to enrich her education. Only a couple days later, she found the Wiggins family’s car sitting outside her house. They told her that they had reconsidered, and would love to support her. The Wiggins supported Kathryn for three years of her high school education with money for her schoolbooks and a house for her to stay in.

At the age of 16, Kathryn met her husband, Dorwin Martin. After two years of dating, the couple married. Kathryn was 19, while Dorwin was 20 years old. However, at the time, there was a law stating that to be married, the woman had to be at least 18, and the man had to be at least 21 years old. Despite being 10 days away from Dorwin’s 21st birthday, the couple decided they couldn’t wait. In order to avoid lying to a judge, Dorwin put the numbers two and one in his shoes. When asked by the judge if he was 21 years old, Dorwin responded saying that he was ‘over 21’. The date was April 25, 1936.

Their youngest daughter, Paula Martin described their marriage as “a love that is… hard to come by. They were married 75 years before my dad died… in almost every picture you see of them, they are touching…holding hands, or he’s got his hand on her shoulder. They really truly loved each other and knew from the moment they got married they were in for the long haul. And they had some really hard times, but you know, they stuck to it.” 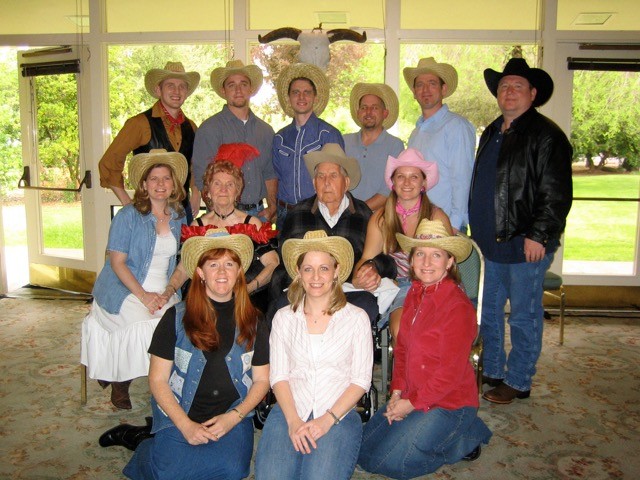 A rodeo-themed celebration of Dorwin and Kathryn’s 70th anniversary

Soon after their marriage, the Martins moved to Wasilla, Kansas. With the move, Kathryn was unable to complete her high school education. It wasn’t until many years later that Kathryn “completed” her senior year, though it was not an official education.

In Kansas, Dorwin had a job at an apple orchard, spraying trees with pesticides and delivering apples throughout the Midwest. Kathryn and Dorwin were able to get a small cottage on the apple orchard free of rent, but there was no running water or toilet, the reality of cheap living in the Great Depression.

In the late 1930s, Kathryn became pregnant with her first child. During her pregnancy, she traveled to visit her brother and contracted smallpox. Tragically, she lost her baby because of the sickness, and she remained very sick for a long time. This was only the first of the troubles the Martins would have to face.

Kathryn became pregnant again in 1938, soon after the tragedy of her miscarriage. The Martins did not have a phone, so when she went into labor, Dorwin had to run through the town to get the local doctor, Dr. Swaills. When the doctor arrived, Kathryn had stopped going through labor pains, which led the doctor to play some music and dance with her until the pains came back.

Following the old wives’ tale, Kathryn’s sister had placed a knife under her mattress, claiming it “cut the pain” of a natural birth. Thankfully, the labor went well, and only a few short hours after going into labor, the Martins had a healthy baby boy.

Soon after the birth of their first child, the Martins decided to California, where Dorwin’s brother had just started a bus station. All of the apple trees had been cut down in order to make room for other farms and buildings, so Dorwin was no longer able to earn a living in Kansas. They sold their house as well as all of their furniture, earning $60 (about $1,000 today) from the sale, money that went towards their trip and survival. 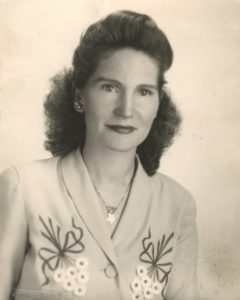 Kathryn at the time of the move.

The couple and their child took the Route 66 down to San Carlos, where they bought their first house after months of renting different apartments in Redwood City. It cost $4,500 for the two-bedroom, two-bathroom house where the Martins finally settled down.

Then, in the 1940s, the United States entered World War II. Despite his wishes to join the Navy, Dorwin was drafted into the army in 1943. Unfortunately, Kathryn soon grew extremely ill due to her long problems with ulcers and was not able to properly care for her children. Dorwin was allowed to leave the army early to help care for his two sons, keeping him out of any direct combat.

After the war, the Martins decided to move to Menlo Park. They paid $10,000 for the house and were the second family to move into the brand new neighborhood Suburban Park. Kathryn still lives in this house today with her son-in-law.

After purchasing their house, Kathryn began her job at the S&M canning factory, located where Costco is today. She worked the night shift, seaming cans of maraschino cherries, and to this day she is extremely proud of her career there. 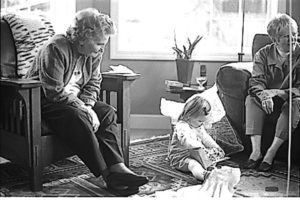 Kathryn is pictured with her friends and family on Dorwin’s 88th birthday.

Kathryn had two more children after the war. In an interview, the youngest, Paula, highlighted her mother’s fun and good nature, as well as her willingness to help others.

Paula recalled her mother’s kindness and care for her after the difficult birth of Paula’s daughter, Brie: “Brie was having seizures, and nobody believed me except my mother. She took care of me after Brie was born. I’ll tell you she became the smartest woman in the world at that moment… And she really took care of me… I was her baby! And she took care of me while I was taking care of my baby! It was really a wonderful, wonderful experience, just incredible.” 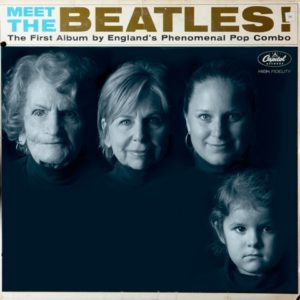 Paula also recalled that her mother always thought of her, even when she had long since moved out to find her own way. She said, “I loved the Beatles all my life… And at Christmas time she’d always get me the latest Beatles album…Even when I was an adult, even when I was living in Los Angeles, if the Beatles were on TV she would call me and she would say, ‘Paula, go turn on ABC, the Beatles—Paul McCartney is on!’ She’d call me and tell me The Beatles were on TV!”

Today, unfortunately, Kathryn cannot remember much of her past and all of the good she’s given the world. She has severe dementia and can remember only the first 50 or so years of her 99-year life. Still, she continues to bring light to the world. 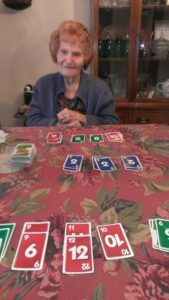 Kathryn is always open for a game of cards, even if she can’t remember the rules. She is always interested in the lives of those around her, and she makes sure that people have what they need. To this day, she worries about her twin brothers, always wanting to make sure they’ve had enough to eat.

Despite her dementia, the positivity Kathryn’s life has brought cannot be taken away. Her family and friends still care deeply for her, and though she is nearing the end of a rich life filled with love and hope, the legacy she will leave behind is far from dying out.