Boo! Thriller in the Park Students parade down Santa Cruz Avenue dressed in a variety of costumes.

This Saturday, the middle school La Entrada and Hillview bands played together at Menlo Park’s Halloween Hoopla Parade and Carnival. Before this event, the bands had only practiced independently. The annual event included a variety of games, prizes, live music, and trick-or-treating in Fremont Park and along Menlo Park Downtown.

The bands have been working on these pieces since the beginning of the school year, training separately for nearly two months. “We will play for the first time today,” La Entrada band director Tony Lanzino said before the parade. “I think it’s going to go really well.” Lanzino and Hillview music director Richard Vaughan trained the bands and led the Halloween parade. Students started in the Maloney Street parking lot, then marched along Santa Cruz Avenue, and stopped in Fremont Park, where they gathered to play a final sequence of songs. Students wore a variety of costumes, from narwhal onesies with sunglasses to pumpkin heads, wigs, and suits. Families lined up along the streets, taking photos and cheering on the band.

“We even played a concert during lunchtime to practice for the parade,” said Evan Chopra, a clarinet player at Hillview.

When asked about their favorite aspects of the parade, Chopra said, “I like dressing up. I’ve always played the clarinet with a pumpkin head, so a lot of the kids remember me from last year.”

Michael Saste, a tenor saxophone player from La Entrada, said that his favorite song from the repertoire was “Thriller”, Michael Jackson’s hit single. “I was really excited for the parade,” he said. “It was fun, especially when I got to play some of the melody parts.” 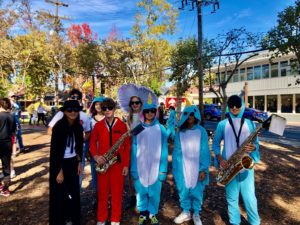 Saste (far right) poses with his friends after the parade.

“It was a lot of fun being able to do this for the whole community,” Saste added.

Chopra stated that he loved being able to connect with his peers through music. “I have a lot of friends in the band, and it’s fun to do activities with them,” he said.

“I love watching the little kids with their costumes and seeing the community come together,” Lanzino stated.

“I think that it’s awesome we have this great collaborative opportunity for students to do music,” he said. “As music teachers, we want to do the most we can to get them as involved as possible.”