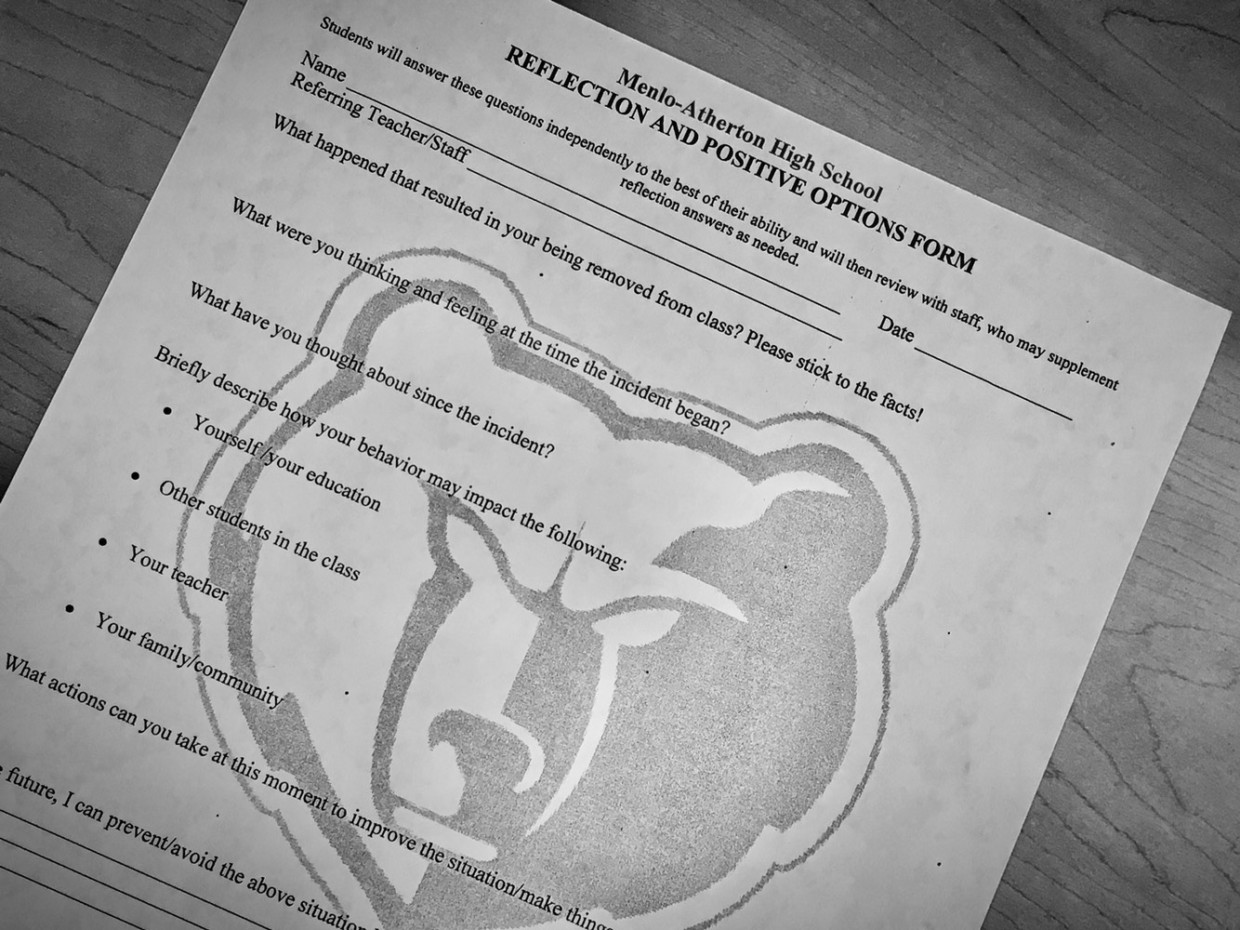 We live in a nation with the highest incarceration rate in the world, where African-Americans are incarcerated at five times the rate of whites. This disparity often starts not with the criminal justice system, but in schools; African-Americans make up only 16 percent of the United States student population, yet 34 percent of school-related arrests. African-American students are over three times as likely as white students to be suspended. This phenomenon, where ineffective responses to student misconduct ultimately lead to their entrance into the juvenile justice system, is known as the ‘school-to-prison pipeline,’ and affects schools around the country, from preschool to 12th grade.

According to the U.S. Department of Education, “Evidence does not show that… suspensions and expulsions help to improve either student behavior or school climate… Suspensions are associated with negative student outcomes such as lower academic performance, higher rates of dropout, failures to graduate on time, decreased academic engagement, and future disciplinary exclusion.”

In fact, the Department of Education recommends schools explore all alternatives prior to out-of-school suspension; the Obama-era initiative Rethink Discipline found that “far too many schools employ discipline policies that unnecessarily remove students from classrooms, are inappropriately enforced by non-administrative staff, and are disproportionately applied to students of color and those with disabilities, particularly in low-income and urban communities.”

M-A is not exempt from this trend. Last school year, African-American students were over six times as likely as white students to get suspended and Hispanic or Latino students over four times as likely at M-A. However, M-A’s overall suspension rate of 2.3 percent is much lower than the national rate of six percent, so the total lower number of suspensions may in part account for this startling disparity.

Ricardo Flores, a junior at Redwood High School, and a former M-A student, was suspended several times during his years at M-A. “I feel like it’s pointless to give out a suspension, because… mostly ‘at risk’ youth get suspensions… make them come to school, don’t just set them free because it’s days you can miss with permission from the school,” said Flores. 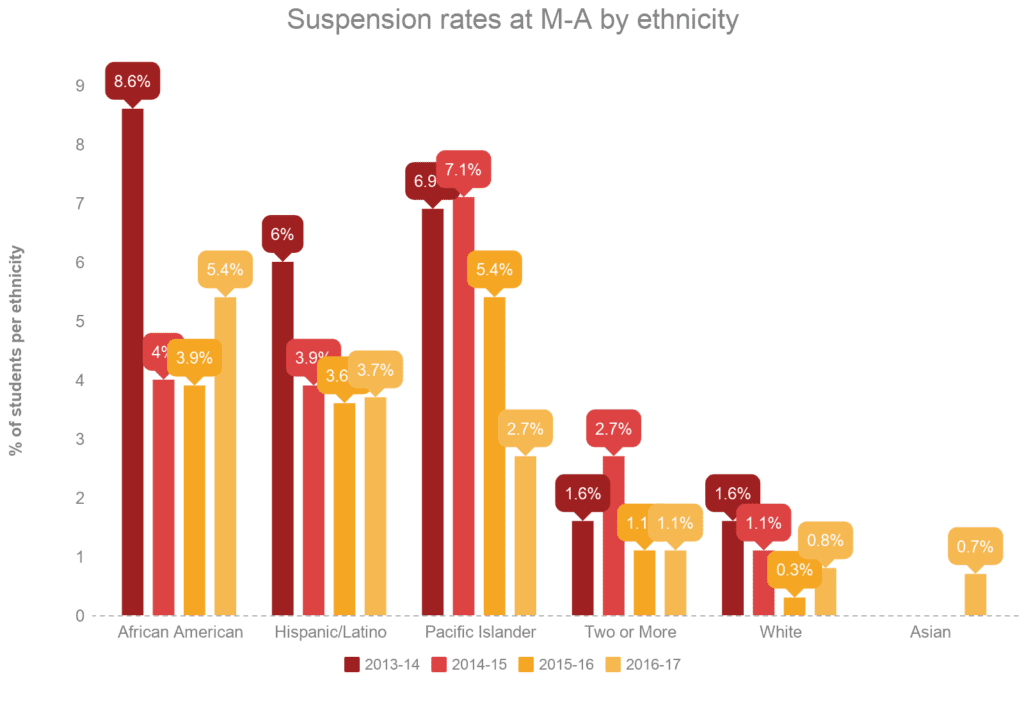 In line with the Obama administration’s guidelines to reduce the use of suspension and expulsion in schools, and pushed by internal tension at the school about how students were being disciplined, M-A began exploring something called restorative justice three years ago. Restorative justice is an approach to conflict that emphasizes community-building, resolution, and dialogue, before punishment.

Last year, about 20 M-A teachers received training on how to implement a restorative mindset at school from Dr. Noel Amherd, an anthropology professor at Chabot-Las Positas Community College District and a restorative justice trainer who works with schools and prisons around the Bay Area.

“When you talk about restorative justice… there’s a wide range of things you can do,” said Instructional Vice Principal Karl Losekoot, “Our attempt was just let’s start talking about forming a community in the classroom.”

Community circles in freshman transition, which the M-A Chronicle reported on last month, has been the most immediate result of these community-building trainings, although individual teachers may also be using them in their classrooms too. Community-building is the first link in the restorative justice chain because creating trusting relationships discourages students from acting out and gives them the responsibility to make up for their actions if they do. “You can’t repair harm if you have no community to apologize to,” elaborated Administrative Vice Principal Janelle Bugarini.

“You can’t repair harm if you have no community to apologize to.” – Bugarini

“We really try not to go right to [suspension], like suspension is the ultimate consequence,” she concluded.

Flores confirmed this process, explaining that he was often sent to Alternative to Suspension (ATS), where a counselor helped him reflect on his actions. However, he also explained that although students are given the opportunity to fill out their own incident report, alongside the one that the staff who reported him fills out, after several times going through the suspension process, he stopped filling out the reports. “When you get suspended, you’re mad and you don’t want to talk to anyone… I just got sick of it,” he said.

Some other examples of alternatives to suspension are the substance education program for students with drug offenses, conflict mediation with Katelyn Lapine, or StarVista counseling. M-A’s declining suspension rates are indicative that services like these had already set the school on a restorative path prior to training with Amherd, and are promising of the benefits to come from creating a restorative culture at M-A.

Losekoot emphasized that the decline in suspension rates is a product of various factors that occur at every level. “I think there’s a lot of things that go on in school from just having good instruction… that engages students; having good support services, which has clearly grown over the last few years… just an increased awareness,” he said.

When asked if there were resources at M-A that made him feel supported, Flores responded, “Yeah of course! They had clubs here… I also used the student support center and… the writing center.”

He also had positive experiences with StarVista counseling, who he said helped him see “the wrong and the right.”

Despite M-A’s support services that work as preventative measures to suspension, there are some instances — called zero tolerance policies — where administration is required to automatically suspend a student by the California Education Code. These include possession of a firearm, brandishing a knife at another person, selling drugs, sexual assault, and possession of an explosive. The logic of zero tolerance policies is that there are certain offenses that automatically pose a threat to other students on campus, so the perpetrator needs to be removed immediately. The existence of these policies — which assume the immediate reaction to any offense is punishment — is evidence of what Amherd calls our nation’s “committed punishing culture.”

“What’s the first thing that every student who goes into the office asks? ‘Am I in trouble?’… That’s what we’ve come to expect in relationship to authority,” Amherd explained.

The issue with this punishment model, Amherd says, is that it “pushes the people who are impacted by that conflict to the margins… It actually removes them from the process. And so their needs are unmet by this. It turns its attention onto the person who has done the harm, who’s broken the rule.”

He added, “there’s a lack of empathy and understanding of the [perpetrator’s] own actions and the impact they have on others, so there’s more repeat behavior.”

Restorative justice seeks to move away from ineffective punishment and towards assuming personal responsibility and ultimately rehabilitation and healing for all involved. If we return to the idea of suspension, as a tool of the punishment model, it makes sense that the Department of Education recommended schools move away from this tactic.

“Exile is one of the hardest psychological experiences to overcome, and when you think about suspensions and expulsions, that’s exactly what we’re doing as a punishment,” said Amherd, “We’re exiling people, and we’re saying ‘you’re not wanted.’ While their bodies may come back, the soul might say ‘I don’t know if I belong.’ And what we might be producing is a community of bodies where nobody feels that they belong.”

“It bums you out,” said Flores of suspensions, “I came back from having my tonsils removed, and I missed a week and… I couldn’t catch up; I couldn’t do anything. It feels the same with a suspension.”

“What we might be producing is a community of bodies where nobody feels that they belong.” – Amherd

With respect to actual youth incarceration, many point to the presence of school resource officers (SROs), which are police officers assigned to school campuses, as an example of our education system’s replacement of internal discipline with criminalization. M-A’s SRO, Officer David Gomez, who works with all nine schools within Atherton, explains that this is not the purpose of the role: “One of the biggest misconceptions of an SRO is that we’re there as disciplinaries and we’re not… I’d rather [the school administration] handle things internally without me getting involved unless they’re mandated.”

Gomez added that the only reason he would get involved with disciplining a student is if the offense is a felony, in which case he conducts an investigation. However, above all, Gomez explained, “I just want to build relationships. I want people to be able to feel comfortable to come and talk to me, I want people to see me more as a mentor versus a police officer.”

This emphasis on relationship-building is what forms the basis of restorative justice. If we can build relationships, we can build a school climate where every student feels they belong. Losekoot acknowledged at a racially and socioeconomically diverse school like M-A, this is not the reality. “I think one of the things we could do a better job of at this school is how do we engage all different types of kids, in the classroom, in the academic process, in what it means to be a part of M-A,” he said.

For Amherd, “restorative justice could be a mechanism where a community like Menlo-Atherton could begin to talk with itself [about these issues]… Acknowledging that right now it’s hard, there’s a sense of awkwardness, there’s a sense of shame, there’s anger, there’s frustration, but there’s desire, and there’s even solution available if we can overcome the things that keep us apart.”

Indeed, Losekoot elaborated that “the first training was the day before… the Trump election, and I think some of the teachers were really thankful we had the training because it… gave them a way of dealing with some of the angst energy that the election brought into the classroom.”

For Flores, M-A’s shift towards a restorative mindset may have come too late. “I lose count,” he said when asked how many times he was suspended at M-A.

In September of this year, he transferred to Redwood because he was behind on credits and would not have graduated on time. Within his first three weeks at Redwood, he was suspended three times. Each suspension was three days long, so out of fifteen possible days at his new school, Flores spent only six of them actually in class. Since those first three weeks, he has been suspended at least another two times. During his suspensions, Flores says, “I go home, and I just lay down. I feel sad inside… because I can’t come back to school, you know.”

As for Flores’ advice for other students? “Just don’t get suspended… Just don’t. It puts you on a bad route.”

With the strides M-A has made so far, the school is on the right track to keeping students like Flores from taking this route. “I give a lot of credit to Mr. Losekoot and the other administrators and teachers who have wanted training and gotten it, because they’re really trying to think this thing through and figure out how do we make it real,” Amherd said.

“We’re definitely trying to prevent that school-to-prison pipeline… that’s not [Gomez’s] intention and that’s not our intention. We’re not trying to put kids in the system in any kind of way; we’re trying to figure out what do we do before they somehow get in trouble with the law,” said Bugarini.

“Restorative justice is not a program, it’s a way of being.” – Amherd

As for what’s next, there are various directions M-A can take on the restorative justice front. Losekoot is interested in training more staff on how to have restorative conversations with students; Lapine hopes to create an open school-wide community circle; Amherd suggested getting students involved in the restorative process and defining the M-A community.