M-A Senior Fashion Show: Not a Lifestyle, but a Celebration

The M-A Senior Fashion Show is a 30-year-old tradition that is a significant part of the senior experience. The show connects students, parents, and community members in their efforts to put on a fun, light-hearted performance.

Since sophomore year, when I excitedly watched the seniors in my brother’s class perform their fashion show, I looked forward to participating in the event myself. I am so grateful for the unique opportunity I had to spend meaningful time with my classmates, while laughing a lot and returning to a sense of childlike fun before we depart on our separate journeys into adulthood. 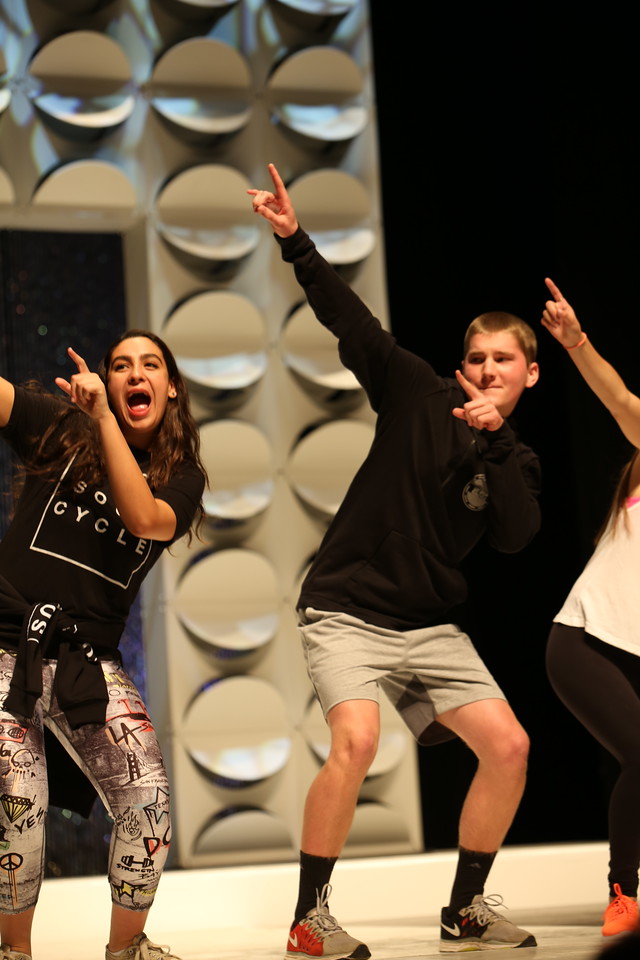 I have nothing but praise for the model coaches and parents who inspired and helped us along the way, and I felt a sense of accomplishment after our final performance. This is why I was shocked when I read an article in the Almanac bashing the fashion show and calling for its termination. Several students, parents, and teachers who participated in or who saw the show have reacted with a similar sense of disbelief.

In a guest opinion, titled “It’s time to ax the M-A Senior Fashion Show,” a mother of a prospective M-A student asserts her rather strongly-worded opinion: “Turns out it’s not a fashion show at all, but a pageant advertising local clothing boutiques, gender stereotypes, and a hollow consumerist lifestyle.”

I would like to bring to light some of the aspects of the fashion show that Jessica Taylor, the author, was unaware of, in hopes of showing her, and others, the positive impact the show has had on our community.

First, the show is a PTA fundraiser that raises money which is used to support a variety of M-A events and programs. In a sense, it is an opportunity for the seniors to give back to a school that equipped us with irreplaceable skills and offered us opportunities to learn in creative ways. Taylor came into the event with preconceived notions that blinded her from understanding the event’s purpose.

Taylor stated, “But the most recognizable look the teenagers sported was discomfort. These children no doubt had countless academic and athletic achievements. That afternoon we subjected them to our collective gaze.”

During our dress rehearsal, I never noticed a sense of discomfort among my classmates. Sure, we were all a little nervous, but this comes with performing in front of people. It was such an improvement from our first Model 101 classes, when we all laughed nervously when told to strike a pose.

Our model coaches, Charleston Pierce and Hannah Rose Johnson, worked with us tirelessly, encouraging us to create our own poses and teaching us to walk with confidence. Before each show, when my group and I walked on stage, Johnson reminded us to hold our heads high, be proud of ourselves, and have fun. That’s all we were trying to do; we did not pretend to have it all together, but we did our best to act like models with the lessons we had learned.

Taylor also disapproved of the interactions between parents and children, stating, “Boys in tuxedos were admired by mothers sporting sexy dresses and sunglasses. I breathed a sigh of relief that the segment sponsored by the Palo Alto boutique ‘Nouvelle Bride’ did not include child brides next to their geriatric fathers.”

It is unfortunate that Taylor was unable to see beyond her judgements and realize how special it was for mothers and fathers to spend time with their children before they leave home. They came to practices, rehearsed their poses, and supported their children through each performance. It seemed that they enjoyed the youthful aspect of the show as well, and in no way expected to be criticized by an audience member. 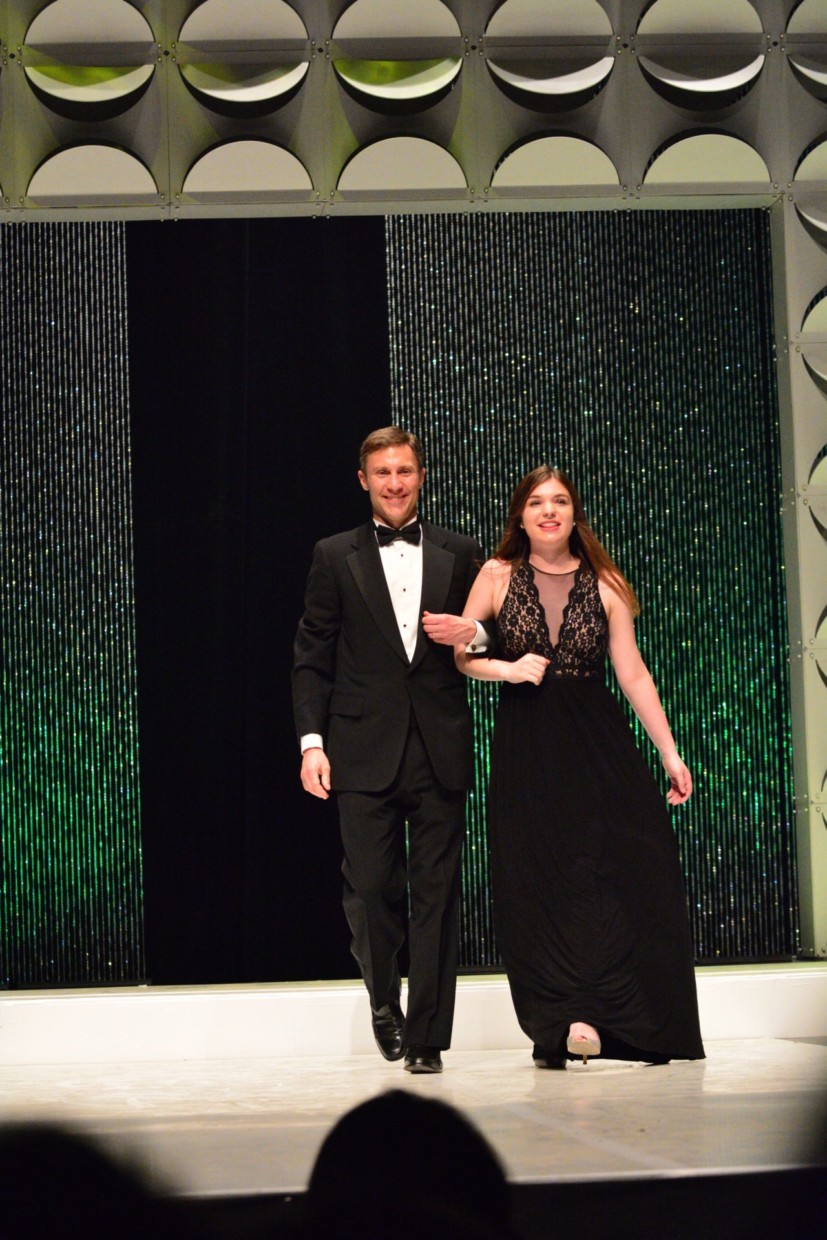 Ken Fenyo, a father of a senior girl, participated in the Macy’s father-daughter segment. After reading Taylor’s article, he commented, “I had a lot of fun at the Fashion Show and it was nice to do something special with my daughter before she graduates M-A. Contrary to what [Taylor] implied, there is nothing odd or creepy about a dad and daughter getting dressed up and busting a move.”

Taylor did bring up a good point about the lack of diversity in the show. It is clear from an observer’s view that our school’s incredibly diverse ethnic and socioeconomic population was not fully represented. Many factors went into the lack of diversity, from the time commitment to some core social issues at M-A. However, instead of “axing” this long-standing M-A tradition, we can use the fashion show to bridge that gap in order to foster greater integration and interaction in our school.

The show’s ability to unite people in pursuit of one goal makes it a significant part of the senior experience.

Senior Eric Delgado, who enlivened the show with his excitement in the Thrift Shop segment, initially knew only one participant in the show but decided to sign up anyway. He really enjoyed the experience and explained, “I learned new dance moves and how to get rid of shyness on the stage.” 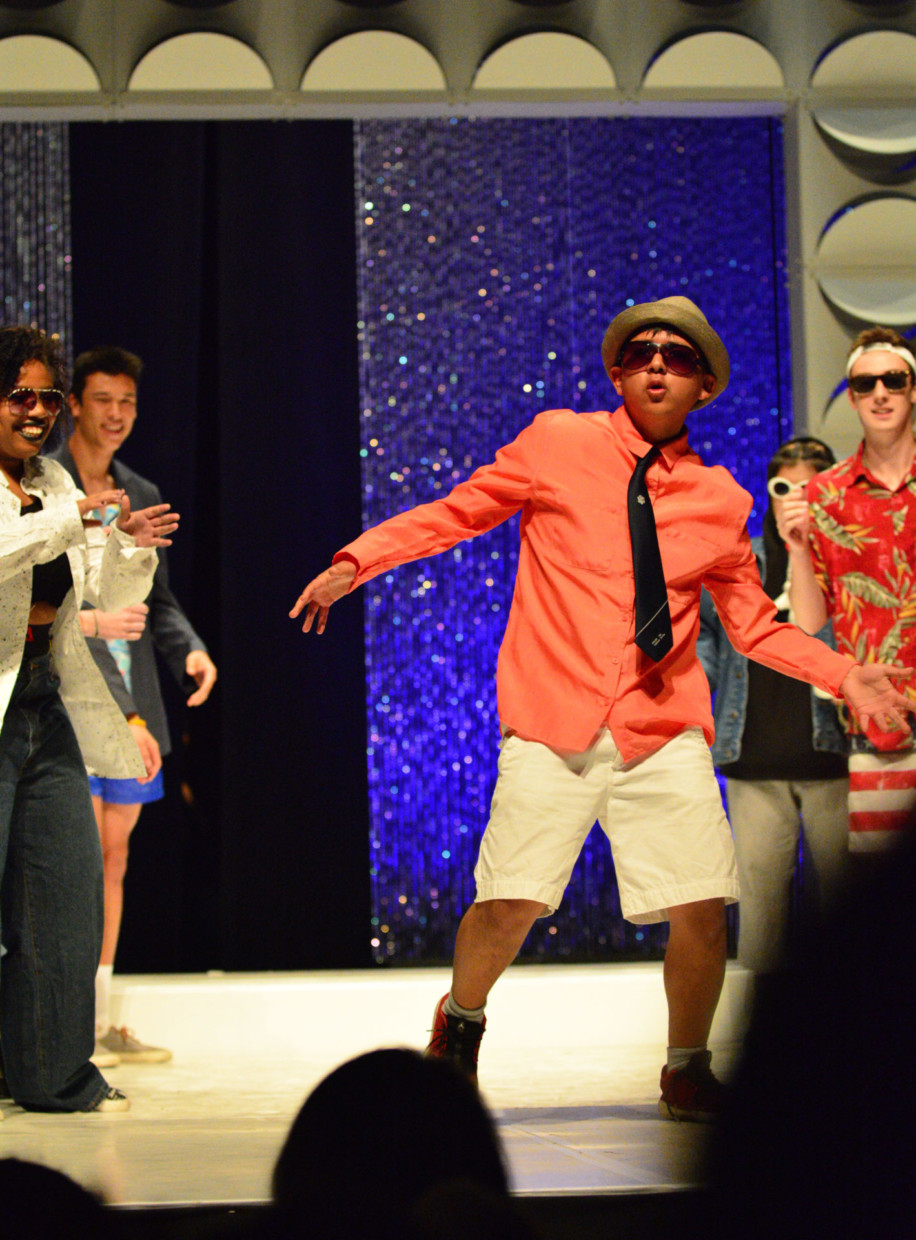 The part of the article that frustrated me the most was when Taylor attacked students for wearing clothes that supposedly represent a certain lifestyle.

“The message to our girls is clear — a life of beauty and leisure is what we value. If you look good in yoga pants, you can marry rich, vacation non-stop, raise children, and choreograph a fashion show like this! The message to our boys is also discouragingly stereotypical — goof off, until you inherit the prosperity you rightly deserve, and then you can take your family on cool ski vacations and sporting events, marry a younger wife, rinse and repeat.”

It was alarming to read this section, especially because there was not a single time during the show when I felt like we were representing a “lifestyle.” There were different categories of outfits for each segment, and I never once thought that they all collectively made up “props” advertising a “lifestyle.”

What we wear should not be a sign of the lifestyle we hope to pursue. In fact, my segment was told we would probably not wear our outfits in real life, but we got to have fun modeling a different style for the people in the audience who may have been interested in buying the clothes. We enjoyed dressing up but did not let our outfits define us. We never suspected that audience members would judge us and assume things about our character based on what we wore.

It was also unsettling that Taylor made her argument political, connecting the clothes we wore to the lifestyle of Melania and Ivanka Trump. Many of the students in the fashion show were the very people who participated in the student walkout this past November to speak out against xenophobia and racism, specifically the anti-immigrant sentiment of Trump’s policies. To then be accused of complicity with members of the Trump family, whether or not we support them, is, simply put, Taylor pushing her own agenda onto our innocent and well-meant event. The fashion show acted as almost a respite from the vicious and vitriolic language and environment of present-day politics, a time where we celebrated each other as individuals rather than judge each other for our political beliefs.

My final critique of Taylor’s opinion is of her statement, “It shouldn’t come as a surprise that not a single outfit appropriate for a working woman in tech was modeled at the M-A Senior Fashion Show. The lifestyle portrayed is hardly representative of the life I lead as a tech professional and the challenges our kids face, most especially our young women.”

Once again, fashion does not equate to lifestyle. Many of my friends wear sweatpants and leggings to school, while others dress up. Both groups are successful in academics, and many girls in the senior class hope to pursue careers in the tech industry like Taylor. Additionally, Taylor failed to note that one of the largest segments of the fashion show was business-casual, work-appropriate outfits.

In the end, this fashion show is just one way that M-A celebrates the achievements of the senior class. We also devote time to commemorating academic, athletic, and musical achievements in different ceremonies and shows throughout the year. These events highlight our achievements, but they also show the diversity in our skills and hobbies. We are not all striving for one “lifestyle,” but rather each hope to contribute to society in a unique way when we leave M-A. 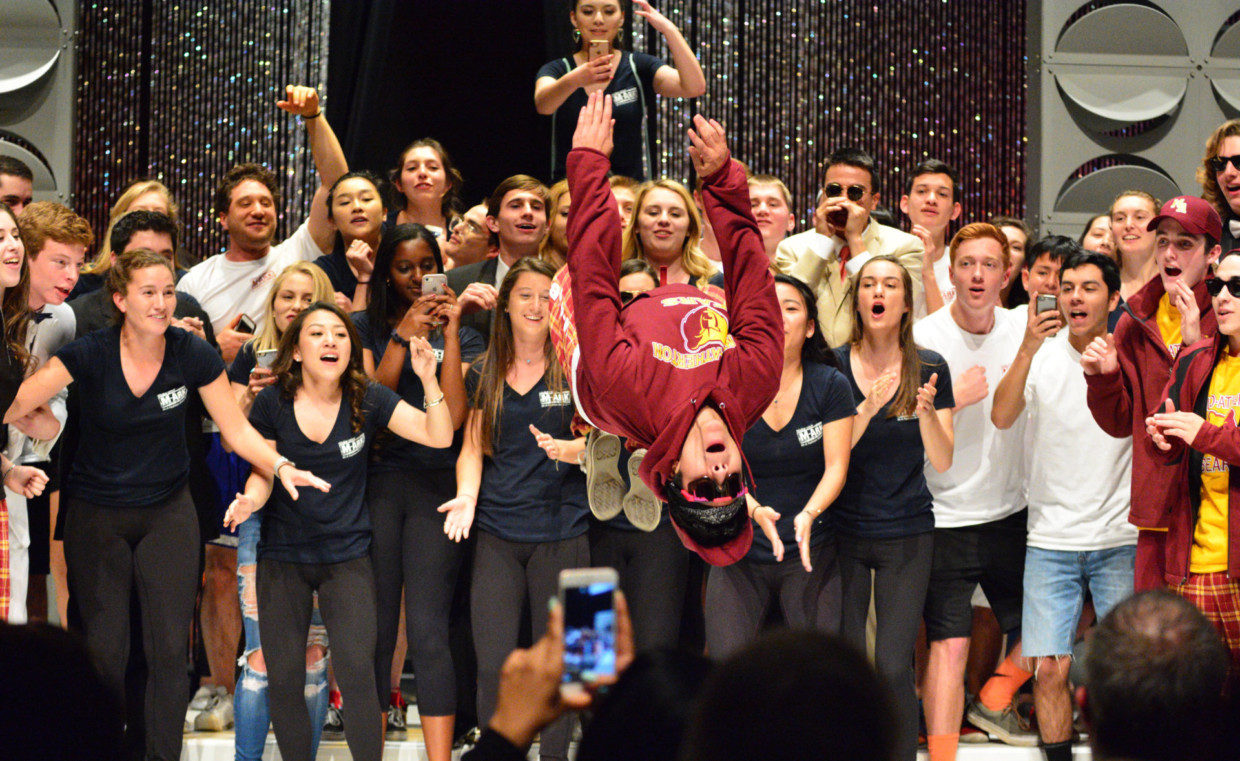 Senior Kennedy Ojeda finishes off the night with a back flip. Credit: Greta Kim.