Justin Cheromiah is not the typical sophomore one encounters everyday. The 16-year-old San Bruno native is currently working on his final exams at Serra High School, but is also preparing to embark on a month long tour across California with his band High Sunn. Ever since he began High Sunn in eighth grade, Cheromiah slowly began to attract popularity from his friends, and gained interest within the underground Indie music scene in the Bay Area for his unique sound.

High Sunn’s sound, full of dreamy vocals and a raw production, is part of a subgenre called Bedroom Pop, in which artists usually record their music at home, thus creating a more raw and personal vibe in their work. His interaction with Bedroom Pop increased because of the established and diverse culture of San Francisco. He explained, “[My proximity to the City] introduced me to a vast amount of new bands that have given me great advice in my journey so far. The areas that really influenced and drove my passion for music are Haight street and the Mission. The visual aesthetic and vibe just allows me to experiment with my creativity. I love the community around there and their support of the musical acts.” His relationship and connections with the City’s indie music scene provided Cheromiah with an opportunity to carry out his vision and begin playing live music.

He has already played four shows in San Francisco, and describes the experience as a very positive one that has helped him grow as an artist.“The live shows taught me of the importance of fans and also made me realize that people do support what I’m doing, and it only encouraged me to work harder.” 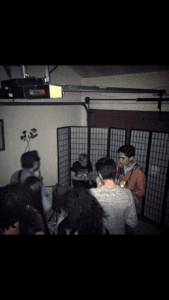 Members of High Sunn perform together.

Cheromiah’s claim that he works hard is not an understatement. At such a young age, he has already released nine long play (LP) albums on his Band Camp page for everybody to enjoy, and has six ready to publish. Despite his success as an artist, he still manages to complete his school work. “I do not have any trouble balancing the two. I basically do my homework right away, and when I finish I usually just start writing or recording.”

Most of his songs all share common themes regarding “heartbreak, rejection, or yearning for something more.” He explained, “I build upon past experiences and stories that I would hear. A lot of my songs are really just love poems that I write when I get bored.” Cheromiah detailed his creative process: “[I begin by] creating a riff and just working off that. Once I starts adding more structure and flow with the instrumentals, it all starts making more sense and coming together nicely. I then add more lyrics or record some guitar and drums and everything then just makes itself.”

Although it may seem like Cheromiah receives positive feedback over his work, he shared, “Some people from school sometimes tease me because my music is too soft and different, but those are the people that are stuck with this mindset that doesn’t let them think for themselves and enjoy other music that is not the radio. These people I’m sure have not even listened to most of my music, but I learned to not really pay attention to them to be honest.”

At the rapid rate Cheromiah’s career is expanding, one can question if he is content with staying in the underground music scene and what his future looks like. He shared, “ Well the future is unknown at this moment, to be honest. I’m playing 15 or more shows this June in Southern California but other than that I plan on releasing more music. Honestly, I don’t care about staying underground. People who want to stay underground usually are wannabes or think that it is cool, but in reality we all want to make it big because there is more opportunities. We all want to be well known for our talents but if I do then there’s nothing I can do about it. But for sure I will try expanding my music. After summer I’m planning on going on a small hiatus during junior year because I’m trying to do well in school and focus on that.”