30 Million Word Gap: Why Some Kids Are Left Behind

Early in the 1990’s, researchers at Rice University found shocking statistics about how socio-economic status prepares a toddler for school. Children from lower-income families heard approximately 30 million fewer words before the age of three than children from higher-income families. Researchers took recordings from households with new toddlers who were on welfare and households who were not, and counted the number of different words spoken around the house.

The more research that is done into the gap, the more apparent the problem becomes. Further studies conducted by Stanford University and other universities showed that the gap is apparent as young as 18 months before most kids are even able to go to preschool.

It may seem odd that hearing words is important for a baby or a toddler, someone who can hardly talk or understand what people say to him or her. However, young children need to be able to build communication skills and connections in the brain, which is precisely why the word gap is crucial to remedy in the years before education.

The early years of development are a period of rapid growth in the brain; the developments made in the first three years of life help determine potential academic achievement for a child’s entire life. Every action a child does in these early years results in a signal transmission from the brain through the nervous system. As a child repeats certain actions over and over, the connection between the brain and the nervous system solidifies and becomes more instinctual. Learning how to communicate and developing early literacy skills is crucial in order to be successful in an increasingly academics-centered world. 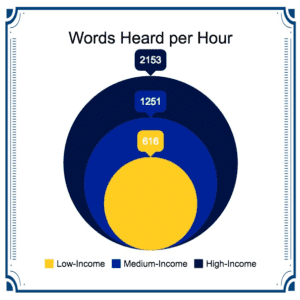 In order to increase the number of words a toddler is exposed to, every moment becomes a teaching moment. The sad truth is that parents from lower-income families have to work far more than parents from high-income families, and do not have as much time as high-income families to do things like taking parental classes. It is hard for any new parent to imagine the large benefits to simply talking to a child, as it does not grow the parent’s mind in any way. However, every moment in a child’s life can be used to teach and talk. Sadly, many new parents, especially of low- income families do not realize this.

The solution to the word gap is not as difficult as it may seem. Of course there are many ways to improve the education system to accommodate students from all different backgrounds, however, there are ways to improve these inequalities before kindergarten. The most important resource new parents can have when figuring out how to raise a child is education on best parenting methods, especially if that education is free. One potential way to do this would be to extend either Medicaid or welfare coverage to include pre-natal care and education, which would give new parents the means to bridge the word gap themselves.

Research has shown that simply overhearing conversations, and sitting in front of the television is not enough for children to build those important neural connections, and bridge the word gap. Whether it be talking about bubbles at bath time, or the cars on the way to school, parents need to talk to their children, even if those children are unable to respond.