2018 Grammy winners, according to the M-A Chronicle

The 2018 Grammy Awards were like any other: a little too long, full of stellar performances, and an utter let-down in rewarding real artistry. Talented and relevant artists were snubbed, while others were a bit over-rewarded. Bruno Mars swept the major categories, ending the night with six Grammys. Although he is undoubtedly great — and a dope dancer — the number of categories he won seemed excessive. We at the Chronicle decided to vote for the Grammys and propose our own winners for some categories.

Album of the Year

In Lamar’s powerful opening performance of the night, comedian Dave Chapelle states in a spoken interlude: “The only thing more frightening than watching a black man be honest in America is being an honest black man in America.”

It was this courageous, radical honesty, coupled with Lamar’s next-level artistry, that made “DAMN.” deserving of Album of the Year.

Record of the Year

“24K Magic” is catchy, but what about Lamar’s powerful, preacher-like “HUMBLE.”?

Lamar raps like a god, dismissing all of his competitors and defending his position as the best rapper alive. He even wears priest robes and poses in Leonardo Da Vinci’s “Last Supper” in the “HUMBLE.” music video. This theme sharply contrasts the hook, “Sit down, be humble.”

The piano riff and 808 drums make the song fast-paced and exciting, fitting for Lamar’s speedy verses. The most legendary moment in the song is when all of the music stops and he yells, “My left stroke just went viral.”

Song of the Year

While Mars’ feel-good chart-topper “That’s What I Like” was an undeniable pop anthem, it pales in comparison to Logic’s important and inspiring “1-800-273-8255.” Titled the phone number for the National Suicide Prevention Lifeline, the song traces the story of a person on the brink of suicide who ultimately chooses life and hope. “1-800-273-8255” helps normalize the issue of mental health by presenting it on a pop platform and gave voice to those struggling with depression and suicidal thoughts.

SZA is definitely the more original artist. Alessia Cara has created radio hits like “Scars To Your Beautiful” and “Wild Things,” but SZA should be rewarded for her more recent ascent into popular rhythm and blues. Where Cara’s music is often simplistic and unoriginal, SZA released a soul-bearing, vulnerable album that is unlike any other this year. In terms of radio hits, “Love Galore” with Travis Scott was a knockout track and transported her from an up-and-coming singer to a relevant and standout artist.

Perhaps more outrageous than Mars sweeping Album, Record, and Song of the Year was the robbery of awarding Best R&B Performance to his bubbly pop anthem, in a year marked by a resurgence of the genre. SZA’s wavy beats, raw vocals, and ethereal synthesizer on this standout track fit much better under the category of R&B than “That’s What I Like” — which is funky at best and fluff at worst.

The Weeknd has changed with his rising fame. His music seems to have lost most of the meaning, mystery, and emotion it used to have. Now, it is all pop songs, with beats that seem like they were calculated just to become radio hits and produce cash. “Starboy” isn’t special enough to win this category, but “Ctrl” is. “Ctrl” is a cohesive album with calming beats and genuine lyrics. Clearly, SZA cares about the quality and importance of what she puts out — you can’t always say the same about the Weeknd.

“Bad and Boujee” was one of the hottest rap songs of 2017. Not only did it bring Migos into the center of rap, but it became a cultural phenomenon, spawning memes and a generation of boujee — rather than bougie — youth. Beyond how much of an internet sensation “Bad and Boujee” was, Migos should have at least gotten one award. Since “Culture” as an album wasn’t quite up to par with “DAMN.” (we think Kendrick earned Best Rap Album rightfully), they deserved Best Rap Performance.

In the style of Looney Tunes, with a black and white twist, JAY-Z reveals the dehumanizing portrayal of African-Americans in the media, especially in vintage animation and pop culture. He narrates characters which represent racist archetypes such as Black Sambo, Uncle Tom, and Mammy. The video is artfully made and eye-opening to the anti-black culture of America, and its relationship to lynchings, segregation, slavery, and hate groups. JAY-Z’s alter-ego in this video, Jaybo, says “O.J. like ‘I’m not black, I’m O.J.’… okay.”

This line refers to when O. J. Simpson reportedly said that he doesn’t identify with the black identity because he felt his wealth made him above or separated from black culture. JAY-Z sends the message that no matter how wealthy a black man like Simpson gets, racial stereotypes will follow him and he will still be subordinate in society. While “HUMBLE.”’s video is well-made and unique, “The Story of O.J.”’s video communicates an important message that we think should have been rewarded in this category. 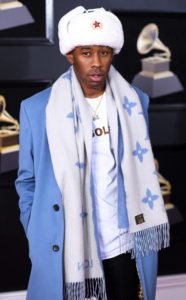 “DAMN.” was the best rap album of 2017 — that’s a no-brainer. But it is unfortunate that Tyler, the Creator had to run up against Kendrick. “Flower Boy” was a huge transition in his career and it would have been great for him to get his first Grammy. Maybe next year? At least he came to the Red Carpet in style with a furry Russian hat.

Don’t get us wrong — “LOYALTY.” is iconic. But is it really more iconic than the King of Rap repenting to cheating on the Queen B, subtly layered into an already layered song about the intergenerational divides in rap and the greater black community? We think not.

Read our review from the album’s release back in September. Enough said.