In March of 2019, a nationwide scandal exposed the fragility of the college admissions process. It raised the question: how could so many false applications fall through the cracks of a supposedly rigorous admissions system? Obviously, money and bribery encouraged admissions offices to turn a blind eye, but what lies can the average applicant get away with?

Since SAT and ACT test scores can be authenticated through the College Board, the Mark focused its investigation on the student-reported extracurricular and award sections.

We contacted over 50 M-A sports coaches and club advisors. Not a single coach or club advisor was asked to verify information on a student’s college application —for example, no college attempted to verify whether a student was really a captain of a sports team. However, a few coaches were contacted as part of the athletic recruiting process.

We reached out to about 60 colleges, with 18 of these colleges giving statements. We also spoke with representatives from the entire UC system and several of its campuses. 11 of the colleges interviewed said they do not fact check applications whatsoever. The remaining seven claimed to verify applicant statistics (i.e. grades and test scores), but will only call counselors to verify student-reported sections (i.e. extracurriculars and awards) if something seems off with the application.

Many colleges, if they find something off about an application, will contact counselors first to get more information on a student. Chapman University admissions officer Tracy Rostello said, “If something seems awry we’ll reach out to the high school counselor for clarity.” Still, many schools do not fact check applications as a routine.

Despite these claims, the majority of M-A counselors have not been contacted by a college to confirm extracurriculars. Francine Andrade, a counselor of 21 years, and Silvia Torres Garza, a counselor of 16 years, have both never had a single college contact them regarding extracurriculars on a student’s application. Similarly, counselor Leticia Gutierrez said, “I’ve been here for almost two years now and not one college has checked with me.”

Two of the counselors declined to comment on the matter.

Guidance counselor Karina Escobar-Weaver, the only counselor out of eight to get calls from colleges, said that “there are some years where I get multiple phone calls and there are years that I don’t hear at all.” However, college counselor Heather Lowe has had to reach out to students to verify information, instead of colleges possibly contacting Lowe later in the process. “I was the one who actually caught the two students that claimed they were presidents of the same club.” The lack of communication between admissions offices and high school counselors can be attributed to colleges only reaching out when something seems out of the ordinary, but that is exactly the issue with the application system. The smaller, more believable lies and embellishments are able to fly under the radar and become standard, broadening the chasm between what is expected from high school students and what is realistic. This only further incentivizes students to lie.

Four of the 60 colleges that we contacted (Dartmouth, Kenyon College, Chapman College and Whitman College) confirmed that they are able to verify student application details through counselor letters of recommendation.

Counselors vouch for students by writing a letter of recommendation for students applying to private or out-of-state schools in the fall of their senior year, but that is based on a student-created resume.

Counselor Leticia Gutierrez said, “I believe what you’re telling me. I have no idea if it’s true or not. I’m writing based on your packet, but I don’t know. We don’t verify. We don’t call. We don’t.” College counselor Heather Lowe noted that, this year, M-A added an honor pledge to the recommendation packet students submit to counselors. Now, students must sign a statement saying, “I certify that the information provided to M-A staff (counselors, college advisors, teachers, coaches, etc.) are (sic) my own work, factually true, and honestly presented.” While honor pledges such as this one can often encourage honesty, this format does not actually force applicants to tell the truth. Gutierrez added, “I can’t check with five clubs that they’re joining. Like, how can I check?”

Dartmouth College, an Ivy League school, claims that they verify all suspicious applications through recommendation letters and test scores. However, Todd Denning, Assistant Admissions Director, admitted later in the call that Dartmouth doesn’t fact check their applications due to the “volume of applicants we receive.” Denning concluded the call stressing the importance of the honor code, saying, “If we [the admissions team] feel there is a need [to contact the school or counselor], then we would, but for the most part, we just have good faith in the student.”

Student-reported sections, or parts of the application where students are able to show schools their personality and interests, are the easiest place to lie about accomplishments. These “student-reported sections” consist of basic background information (such as age, gender, and race), extracurricular activities (sports, jobs and volunteering), and awards. Official high school transcripts and test scores must be sent out to colleges, so these are not considered part of the student-reported section. In cases where colleges allow for initial self-reporting of test scores for the admission process, students must generally send an official report once admitted. 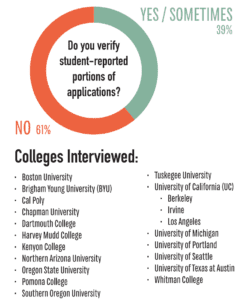 Even though each University of California (UC) campus has a different way of reviewing applications, the admissions system acts as a single unit. Because of this, every UC has access to all applications for any UC school and has the ability to rescind them. They’re able to share information from student applications with each other. With private universities, however, even if applicants are caught lying, it is against federal antitrust laws to share this information with other universities.

In an email, Sarah McBride of the UC system said, “the Systemwide Undergraduate Admissions office selects a random sampling of applications for verification and provides a foundation for ensuring that those who have falsely reported application information can be detected.” When verifying applications, the UC board asks students “to provide documentation verifying the item selected in their application.” Only 1% (about 2,000 out of 217,650) applications are fact checked. If they find that a student has lied on their application, their admissions to all UCs will be revoked. According to the UC system statement, “as a result of verifying achievements, the University typically cancels nearly 100 applications per year due to nonresponse, versus fewer than half a dozen per year due to admitted falsification.” College counselor Mai Lien Nguyen has had M-A students that have been audited by the UC schools, and described, “the school would need to provide proof: for instance, a letter from a coach saying that they were on the team.” The issue with not fact-checking the other 99% of applications is that within that 99%, there are likely many more students who lied on their application.

The recent focus on the deep-seated corruption concerning college admissions has inspired Brown to investigate their recruited athletes. The university released an announcement just after the scandal in April stating that “in March, the university completed a case-by-case review of every recruited varsity athlete who enrolled at Brown over the last four years, and found no concerns. This internal investigation is being followed by a broader assessment to gauge any exposure to risk from falsified admissions materials.” Escobar-Weaver confirmed that Brown is one of the schools that has contacted her in the past.

The March 2019 Varsity Blues scandal hit close to home because several local parents—including two with students at M-A—pled guilty to falsifying portions of their children’s college applications. The news definitively proved that M-A and local students are willing to go to great—even illegal—lengths to get into college. In an area as competitive as Silicon Valley, such pressures to achieve, or rather fabricate achievement, are exceedingly high.

The Mark’s interviews with college admissions officers nationwide revealed that students are often able to get away with embellishments and even full-blown lies, given that many colleges don’t verify student-reported achievements. Even if a college discovers lies on a student’s application, they are unable to alert other universities, allowing further lies to go undetected.

This comes as disheartening news to many M-A students. Senior Alex Roginski said, “The fact that colleges place students who work diligently to develop their extracurriculars on the same level as those who lie and exaggerate their activities without punishment is a great injustice in our education system.”

Junior Anika Bjerknes said, “I feel somewhat discouraged because I worked hard all four years to set myself up for success and someone could just lie their way into any school they wanted.”