On Saturday, December 3, members of M-A’s girls varsity wrestling program came to school bright and early to take part in the team’s first Bear Bash. The event was an all-day girls wrestling tournament that included over 100 wrestlers from several local schools, as well as teams from farther away in Northern and Central California.

The Bear Bash was held in Ayers Gym and M-A’s wrestling room, and wrestling matches began at 9 a.m. Each of the five mats that were set up had a referee and a scoreboard to track time and points. Every match was a maximum of six minutes and included three two-minute periods, during which wrestlers attempted to pin their opponents’ shoulder blades to the ground for at least five seconds to be declared the winner.

While a pin is the ultimate goal, each wrestler can earn points for executing certain moves. For example, taking down the opponent is worth two points, while escaping a takedown is worth one point. If a wrestler pins her opponent’s shoulders past 45 degrees for two seconds, she gets two points, and three points if she holds this position for five seconds.

The referee counts as a wrestler from M-A is pinned.

A wrestler can also win on a “technical” if one athlete earns too many points before the six-minute limit. Each match begins with a handshake between wrestlers and a whistle from the referee. If one wrestler sets up incorrectly or is stalling, she receives a “caution,” or a warning, and if it happens again, her opponent receives a point. The wrestlers may also be penalized if they wait too long before making a move.

Calhoon shakes hands with an opponent before a match.

Sophomore Evelyn Calhoon, a second-year varsity wrestler, spoke of the aggressive nature of the sport and explained that the goal is to take down your opponent as quickly as possible. She added, “As M-A wrestlers, we are the aggressors. We always push the action.”

As each match took place, parents and teammates watched from the sidelines, and team members often shouted advice or encouragement to their comrades in action. Head coach Phil Hoang and assistant coaches made sure to watch every match as well, pushing their athletes to compete as best as they could.

An M-A wrestler competes in the wrestling room.

Before the 2016 season kicked off, Hoang mentioned the Bear Bash as one of the things he was most excited for this year. By hosting girls programs from several nearby schools, the Bears were able to compete with wrestlers of all levels and prove how much their hard work is paying off. Hoang described the event as a great way for athletes to practice fundraising skills and responsibility as they prepared, explaining, “We have kids on the team who are now experts at fundraising, we have kids who are developing very strong leadership skills, they’re going out and representing the sport and being ambassadors, they’re coaching, they’re practicing their public speaking skills. It’s a unique team to see that they have exceeded the expectation of the athlete and have gone above the game. I think the sky is the limit for each of these athletes.”

Calhoon is victorious over a wrestler from Sequoia.

After months of practicing against fellow team members and competing in several coed wrestling tournaments, the Bear Bash was the perfect way for M-A’s top wrestlers to compete in four or five matches against new teams in the span of a few hours. As of now, M-A girls wrestling is ranked first in the Central Coast Section (CCS) Open Division after finishing eleventh in the state last season.

At the Bear Bash, M-A’s varsity wrestlers competed with athletes from schools as near as Sequoia and as far as Bear Creek in Stockton. Hoang knows that wrestling is an intense and sometimes frustrating commitment, and he explained, “The first meeting I had with every wrestler was an ‘expectations’ meeting, and the first and most fundamental thing that I expect of each wrestler is that they must have fun. They must have fun to endure the strenuous training that they go through, and if they didn’t enjoy it, it would be nearly impossible. I think just by being on this team they have become best friends. Also, athletes enjoy the fact they look stronger, they look healthier and can do things that they couldn’t before.”

The atmosphere at Saturday’s Bear Bash reflected this value; even as girls were thrown to the floor and locked in battle with opponents, it was clear that M-A’s team was having fun. When each wrestler stepped onto the mat, she was focused on winning, but even with this aggressive attitude, the Bears enjoyed the support of their family and friends and spent the day trying to improve.

Calhoon and girls team captain Lauren McDonnell noted that an important part of each match is preparation, and most wrestlers have certain things they do before each match. McDonnell said, “You try and get as relaxed as possible, try to convince yourself you’re not nervous because that’s when you wrestle the best. Everyone has a pre-match ritual, slapping yourself or jogging in place to get ready. You check in, get where your mat is, get a coach. Then when you’re wrestling, you tune all the other sounds out and just focus on your coach. It’s kind of hectic but we figure it out.”

Calhoon tries to stay in control against an opponent.

Because wrestling is such an individual, nuanced sport, team members have a unique opportunity to challenge themselves. McDonnell added that her favorite part about the sport “is that it’s a challenge no matter who you’re wrestling or what move you’re doing. In other sports, you have possession of the ball and you’re in control, but in wrestling that control changes every millisecond. In a way, that makes it more challenging than other sports.”

This challenge is exactly what keeps Calhoon coming back for more, and what brings the team even closer together. Waking up at 5 a.m. for morning practices or completing Marine fitness challenges is far from easy, but as Calhoon said, “It’s kind of a love-hate relationship, like afterward I love that I’ve put myself through another practice and gotten stronger. I do a lot of stuff I never thought I could do.”

Calhoon sizes up her opponent.

M-A’s girls varsity wrestling team is one of the most dedicated teams on campus, and this passion for wrestling made Saturday’s Bear Bash a huge success. The tournament will likely become an annual event, and although the results do not affect the Bears’ league standing, the team was happy to spend time getting better, together. 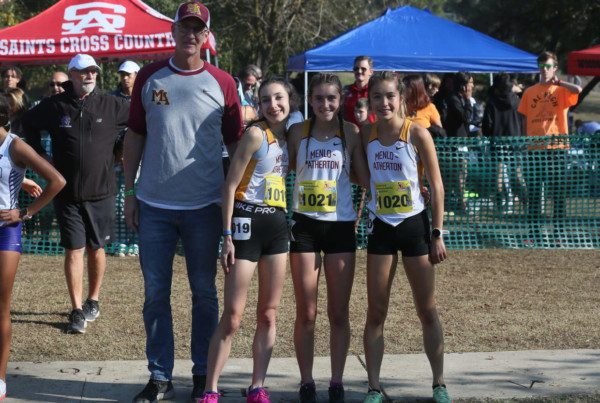