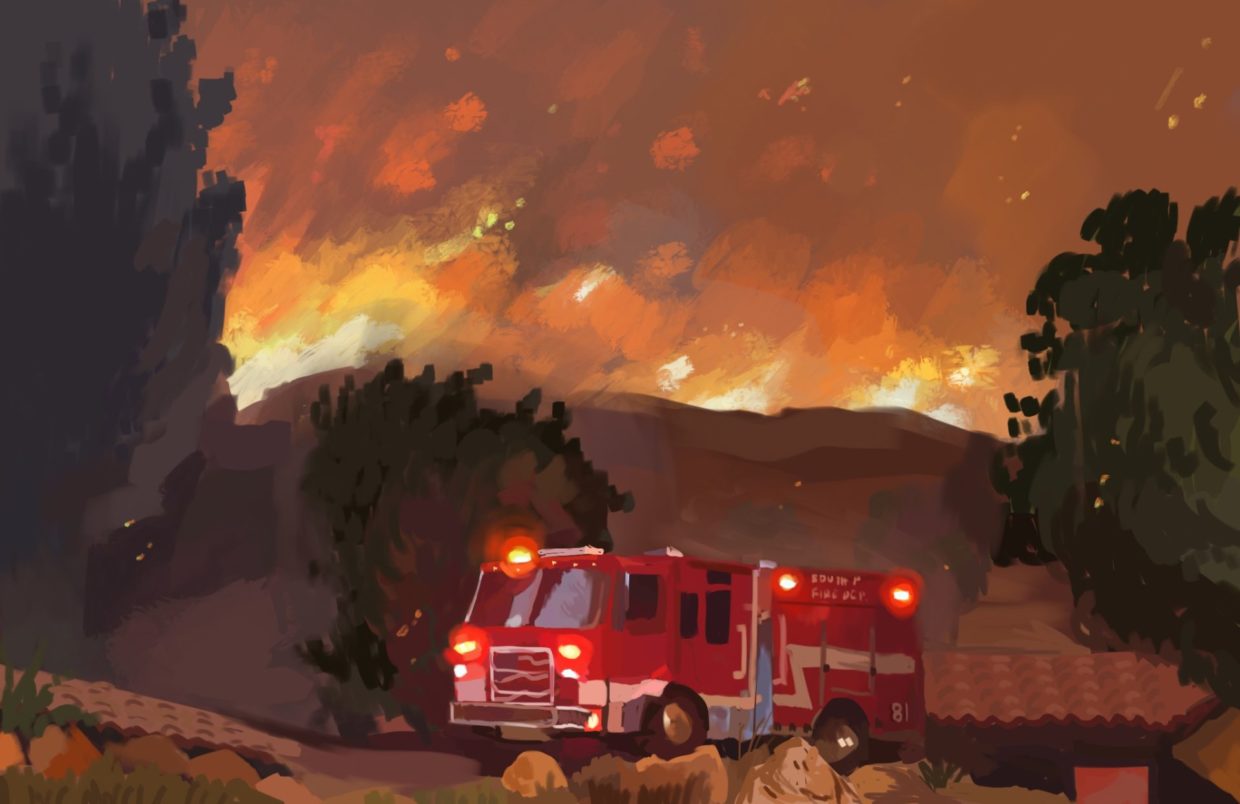 Wildfires Impact the M-A Community and Beyond

Following last year’s Paradise Fire, the deadliest fire in over 100 years of Californian history, new wildfires in both Northern and Southern California wreaked havoc on neighborhoods, despite preventative measures by PG&E. Scheduled power outages and Northern Californian fires had the largest direct impact on members of the Menlo-Atherton community, from teachers to students.

Due to high housing costs, many teachers at M-A are unable to life in the Bay Area, residing an average of 14.03 miles from campus. English teacher Tania Kranzler lives in Half Moon Bay and the last major round of outages cut power to her family’s house.

“We threw away food and purchased ice to try and keep food cold,” Kranzler said. She brought some of her family’s electronics to school to charge them. Despite her family’s drained batteries and town’s dysfunctional traffic lights, Kranzler appreciated “the quality time together as a family.”

History teacher Anne Olson and her family experienced the destruction of Californian wildfires first hand, beginning with the Tubbs Fire of 2017. She woke in the middle of the night to panicked texts and calls from friends and family. The Sonoma County Sheriff’s Office woke Olson’s grandparents and told them they had “only two minutes to evacuate [their] house.” Her parents had to leave their “neighborhood of 50 years with just the clothing on their backs. They left behind family history and memorabilia, all of their medications, legal documents, and their cell phones.” Their home was one of the 5,623 buildings burned during the 2017 Tubbs Fire in Santa Rosa.

The closest recent fire was the Sonoma County Kincade Fire, finally contained on November 6th, 2019. The Kincade was the most destructive of the 2019 season thus far, burning through 77,758 acres.

According to Olson, residents of Santa Rosa started taking precautions after the Tubbs fire and established “evacuation packs, planned meeting spots, and have experienced the horror of a middle of the night mandatory evacuation.” Most of Olson’s family evacuated during the Kincade fire, while her parents decided to stay in their home, two blocks outside of the mandatory evacuation zone and “lived without power in their home for six days.”

“When the power is out, it not only takes away the modern conveniences, but it totally disrupts their lives; businesses close down and food supply is low. My sister works as a teacher in Marin County but can’t send her kids to school and either has to take her kids to work with her or pay for extra childcare for them,” Olson added.

In response to the PG&E power outages, Olson said, “Although the PG&E power outages were frustrating and interfered with daily life, the planned outages also give peace of mind to people like my grandparents who narrowly survived the 2017 fires. From the planned outages to the organized coordinated efforts of first responders and city officials, it is evident that lessons were learned during the 2017 fires. While not a perfect system, I see the value in planned outages and being proactive as opposed to reactionary.”

Kranzler agreed, saying, “Preventing a fire is the most important thing of all—even over our own inconvenience. Beneficial, but bigger and better solutions must be looked into.”

A few weeks ago, the Menlo-Atherton chapter of the Leo Club collaborated with the Menlo Park Veteran’s Affair center to decorate cookies for victims of the recent Sonoma County Fires.

“We were originally going to donate our profits to the Hurricane Dorian relief efforts, but after we heard about the Sonoma fire, the officers decided that that issue was closer to home and needed immediate help,” said sophomore Rebecca Sandoval. “We haven’t calculated the total, but all our funds go to the fire relief,” she added.  “Helping [the fire victims] opened my eyes to the reality that I have the power to help create change through service.”