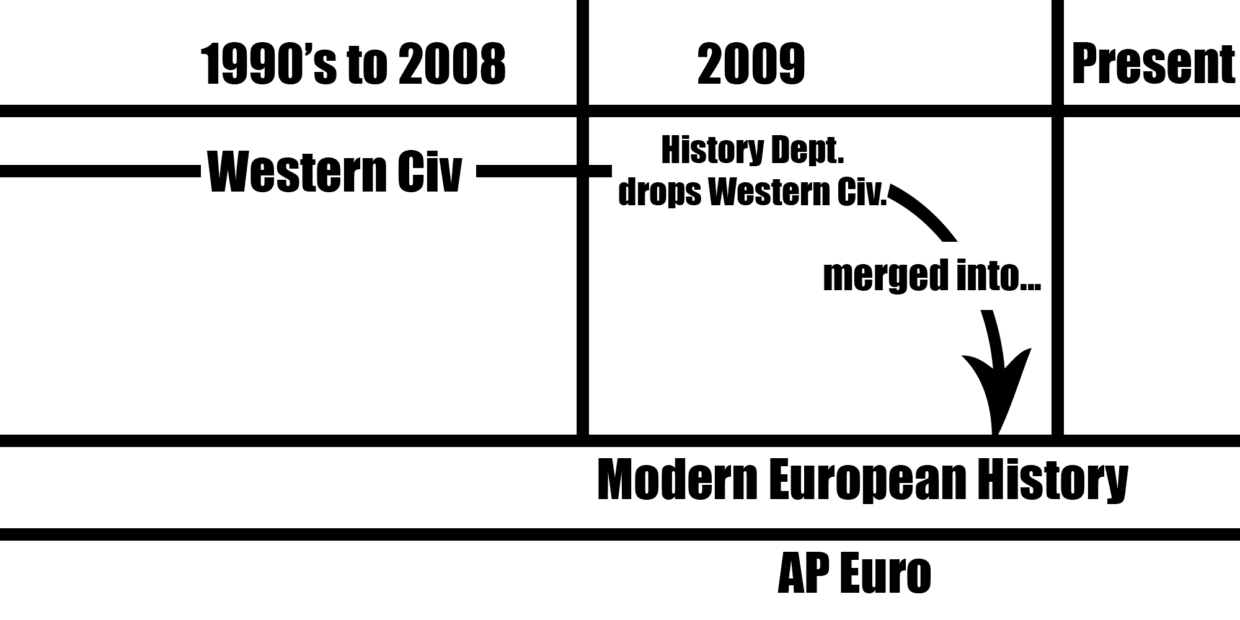 Why did the “Western Civilization” course get dropped?

From the 1990s to the late 2000s, there were two history tracks available to M-A sophomores: a full year course called Western Civilization, and a semester-long European history course paired with a semester of classroom-based Driver’s Education. (AP Euro is offered, but not as one of the main tracks.)

Alan Perry, an M-A history teacher with more than 10 years of experience, says that Western Civilization was not an honours class, “as there wasn’t any point-five bump (in grade points), it was all about kids who wanted to take a full year of history, rather than [just] one semester,” (and another semester of Driver’s Ed) Perry notes. “It was kind of like an elective for sophomores.” However, once World Studies III (now Modern European History) was introduced in 2009, it began to see conflict with the History-Drivers Ed course. Perry elaborates, “And so, we had two year-long courses, and over time, because there were the same people teaching both, they ended up having basically the same units; they had the same major assignments as far as papers.” Even though they covered virtually the same curriculum, the two classes had noticeable demographic differences. “It was basically two schools within one, and for the most part, students coming from the Ravenswood district were in [Modern European History] and the students coming from non-Ravenswood were in Western Civ.” Soon, the most significant difference between the courses was the students themselves. Thus, the History Department ruled that “there was no more need for multiple classes that did the same thing.” Western Civilization was axed.

AP Euro and Modern European History are of varying difficulties and workload. As, according to sophomore Emily McMaster, “isn’t difficult, but you still learn a lot. Most of the work is in class with very little homework. Overall, I’m really happy I took the course.” However AP Euro is more strenuous, as sophomore Stella Kaval notes, “it’s really hard to understand the difficulty of AP Euro if you’re not in the class. The workload for Euro is unlike any other class. There aren’t any busy work-type homework sheets…to be successful in Euro, you have to study class notes every day for hours.”