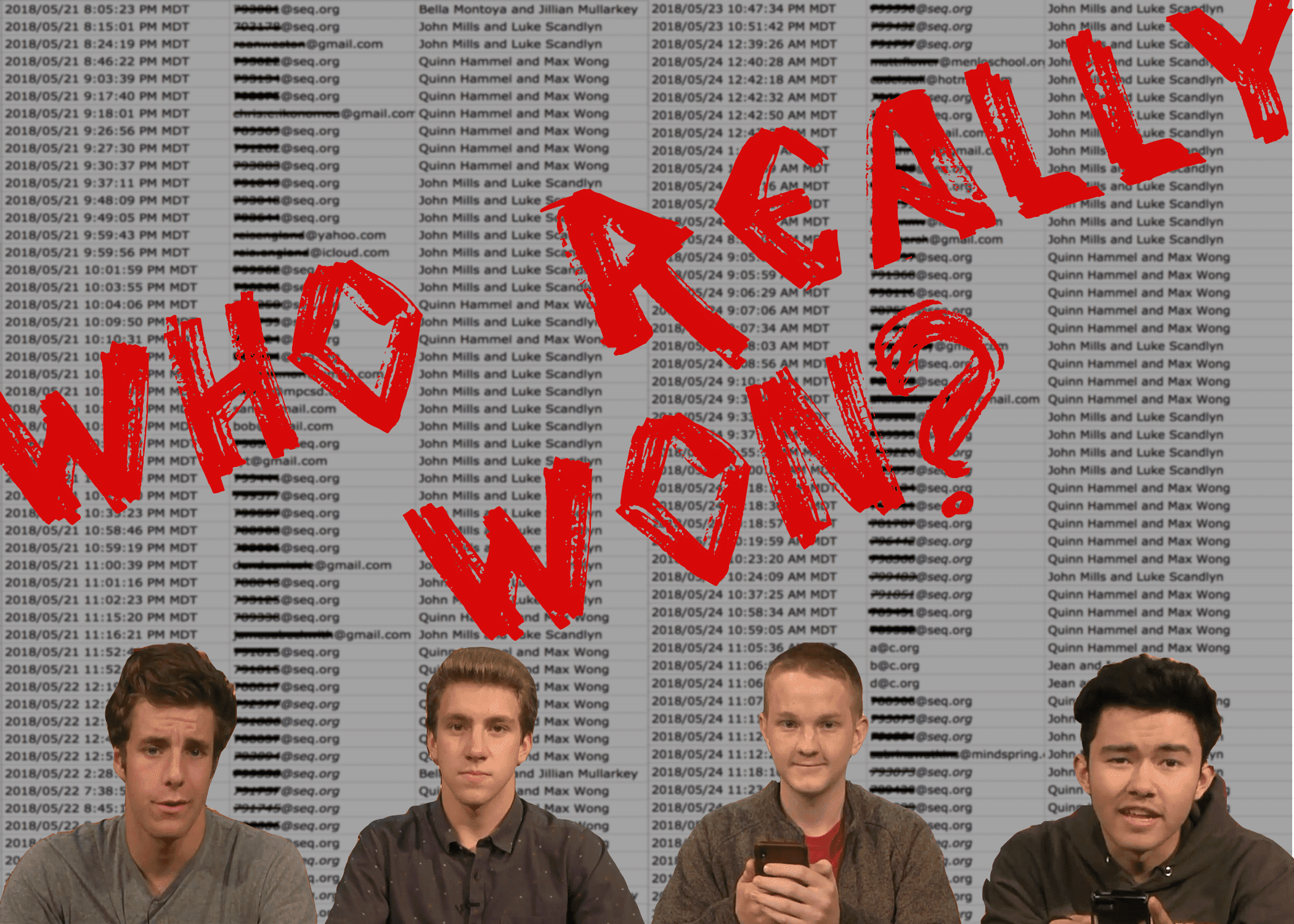 This story was printed in the MArk, and is an expanded version of an article posted on the M-A Chronicle in December.

“We lost, not like it’s rigged or anything.” That is what’s posted on Quinn Hammel and Max Wong’s campaign website, still running months after last year’s class presidential election. It may not have been rigged, but surely something’s off.

An announcement on M-A Today on Monday, May 21 stated, “voting will open on Tuesday and close on Thursday.” The exact time that polls would be closed was not explicitly mentioned, but many believed that votes cast throughout Thursday would be included in the final tally.

Candidate and runner up Quinn Hammel said, “I think people thought that they would close them later on Thursday, especially considering that the rally was on Friday.” It was at Friday’s lunchtime rally that the winners, John Mills and Luke Scandlyn, were announced.

Hammel contacted leadership teacher Michael Amoroso after the results were announced, addressing the timeline confusion, and said, “[Amoroso] apologized for giving the wrong time and date to M-A Today and said that doing a recount would be too difficult.”

Former class president Ian Peterson, who was elected with Jean Claverie, noted, “An important detail is, after the class of 2017 graduated it was made a rule that senior class presidents had to take the leadership class.” Mills had been in the leadership class before, while Hammel and Max Wong started their campaign as outsiders. Hammel said, “Our campaign strategy was basically to have a ‘minimum effort’ type feel to all of our materials. We made the website pretty unattractive…Most of our posters…just were screenshots from snapchat. The messily taped ‘http://wammel.org’ on the side of the I-wing was consistent with this as well…For our campaign speech, we wrote it to be full of tropes and meaningless phrases.”

Senior Conrad Kuhlman, who is good friends with both Hammel and Wong, said, “They were not taking it as seriously, they were not really campaigning, kind of taking it as a joke, but they were always in the lead, so we didn’t think too much about it.” 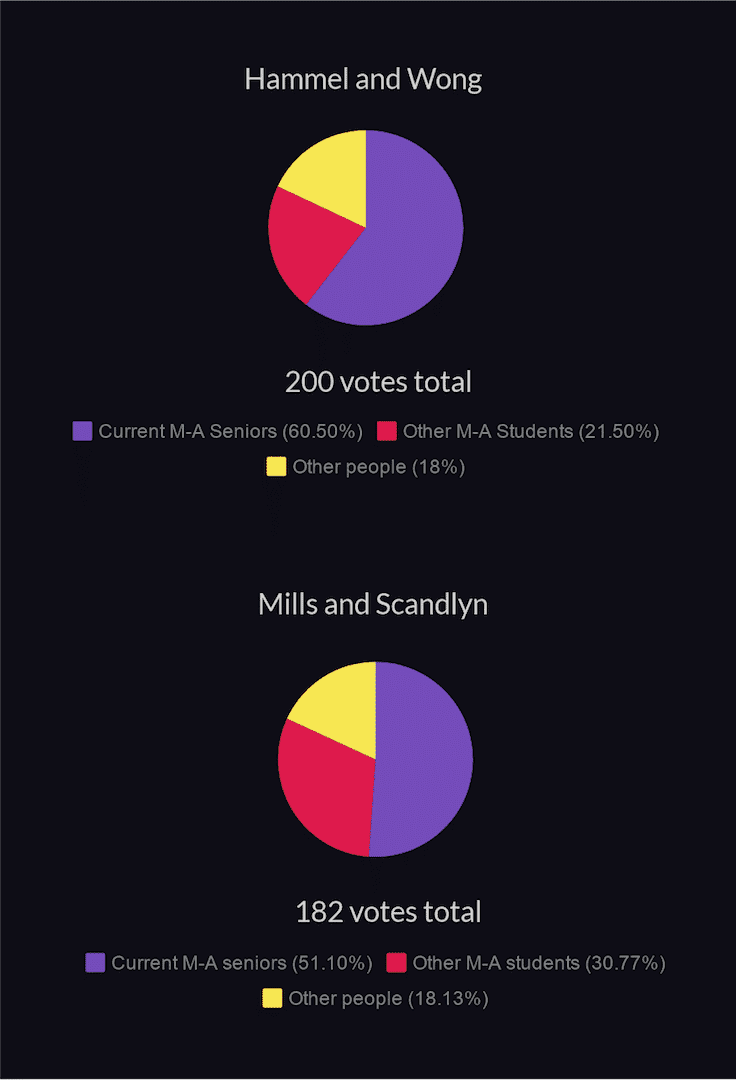 Hammel agreed, stating, “I felt that the election was going well during the voting process; I had a few people tell me they thought our posters were funny, and in general I thought that we articulated our message correctly. I also remember hearing rumors that Max and I were ahead at the time.”

That anti-establishment mentality may have helped Hammel and Wong get votes they never expected. According to the data, a teacher submitted a vote for the pair. Kuhlman explained, “I was in class, and I was like, I’m gonna try to get everyone to vote for Wammel, since we had some extra time.”

Kuhlman then offered his phone, had the teacher type in her email, and click on Wammel. “She said, is this allowed? And I was like, I don’t know,” Kuhlman said. Nevertheless, the vote went through and was counted.

Hammel added, “While we made [our] posters look low effort, they were also the only posters present; no one else seemed to be campaigning nearly as much.”

Rumors spread that students from other schools were being asked to vote, too. Kuhlman said, “I found out the day after I thought the deadline ended…I cast my original vote and I didn’t think to try multiple times, I don’t know if other people knew..” 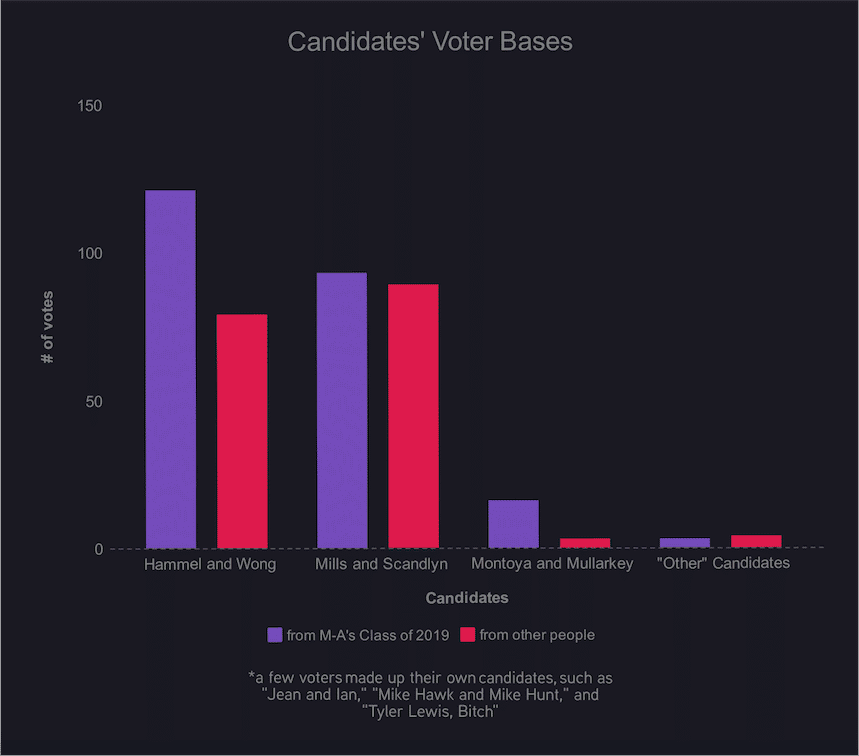 Hammel said, “I noticed that the [voting] website had little to no security. I knew that any email could be entered, but I was not sure as to whether the same email could repeatedly vote for a candidate. However, I thought overall that the lack of security was interesting, and a little funny.”

Former senior president Ian Peterson confirmed, “I don’t know if this affected the actual election results, but something problematic that my Co-President, Jean Claverie, and I often joked about was the lack of security around leadership’s various google drive and gmail accounts. Everyone even vaguely connected to leadership, whether they were officers, committee members, or friends outside of the class, often knew the one very obvious password used for all of the accounts. These accounts have access to many items, including, of course, the election forms.”

Other sources have confirmed that multiple Leadership students had access to the voting spreadsheet, even though only one person was assigned to oversee it.

In total, roughly half of the votes on those very election forms appear illegitimate. Students not in the class of 2019 voted. Students from other schools in the district voted. Non-verifiable, non-seq accounts like “[email protected]” and “[email protected]” voted. Some students appear to have voted several times. According to sources, leadership counted all votes, regardless of their email.

So who really won? We don’t know, and we’re not sure anyone does. The winner depends on two things: when the polls were closed, and whether or not all votes were counted, even invalid ones.

Voting data is public record according to the Student Press Law Center, and according to the current leadership tally 408 votes were recorded from Monday morning through Thursday afternoon, but after trying to find a match for every ID number, only 294 of these were cast by M-A sophomores, juniors, or seniors. 74 were from invalid district email addresses, and 40 were from servers outside the district.

What do these numbers translate to? Only 57 percent of the total votes were valid, cast by current seniors who voted in their own class election.

There was nothing stopping voters who did not enter a Sequoia Union High School District email address, whose district accounts were deactivated, or who were not in attendance at M-A. Furthermore, there was no way to filter votes by grade level, meaning M-A students who wished to vote for a senior class president running pair could, even though the election was for incoming seniors only. And anyone could vote more than once, even with the same email address.Much of this could have been avoided by placing stricter settings on the Google election form, or excluding any non-seq votes from the final tally, both options Google Forms provides.

When only district votes are counted, Hammel and Wong win by a few votes on Thursday afternoon when the votes end in our data. When only current seniors are counted, Wong and Hammel again end up on top, 121 votes to Scandlyn and Mills’ 92 on Thursday. But, if votes are cut off on Wednesday night, Mills and Scandlyn are in fact ahead, 163 votes to 151. Of course, that’s only the case because Leadership counted every vote— if only valid ones are included, Wong and Hammel once again win by nearly 20 votes.

When was Leadership supposed to stop counting? That also depends on who you ask. M-A Today announced Thursday as the deadline, Mills said he didn’t remember, Amoroso declined to comment, and an anonymous Leadership student said it was supposed to continue until Friday’s rally. However, the only time Scandlyn and Mills are ahead in total votes is if they are stopped at midnight on Wednesday.

So the data is confusing, but according to Leadership our data is, indeed, official. In every case, Hammel and Wong have more votes from seniors. 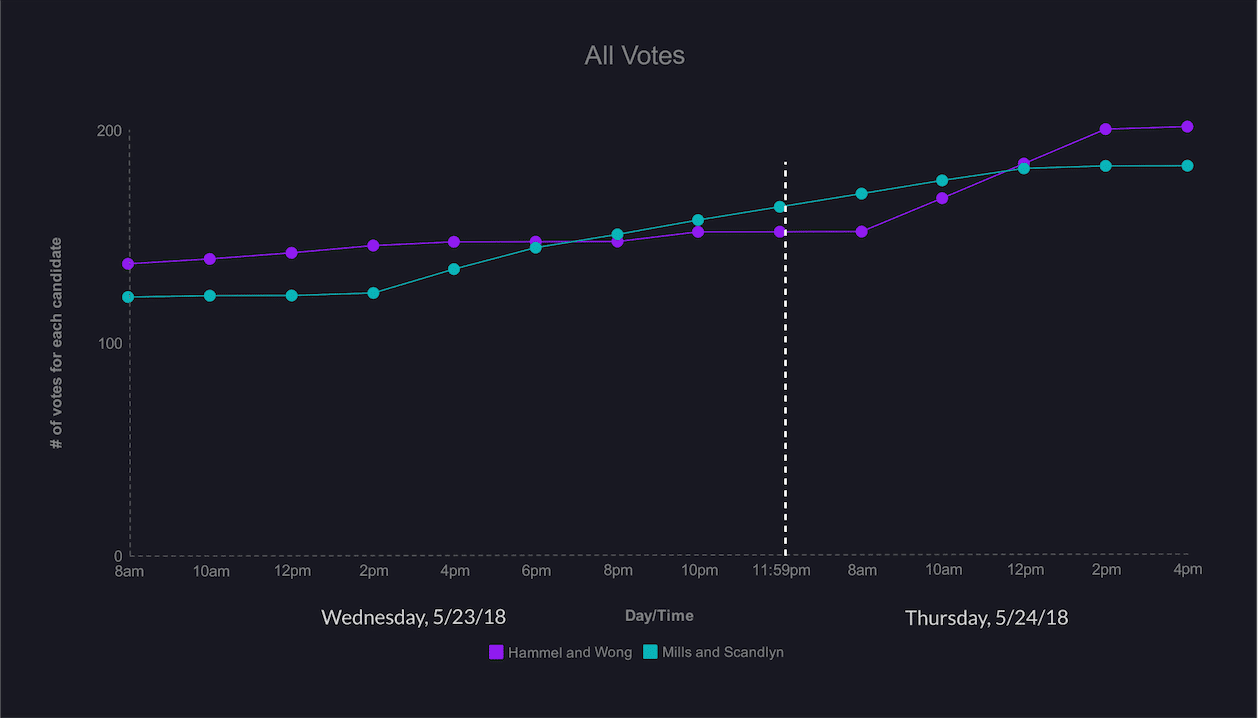 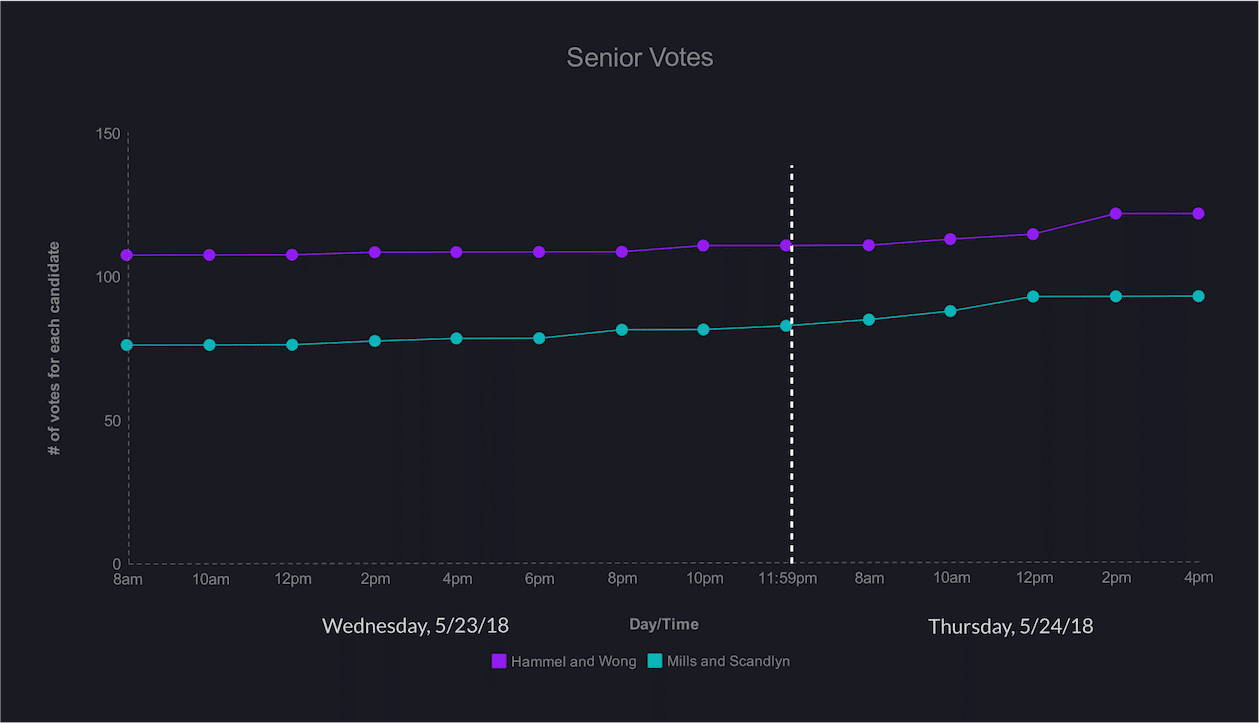 When asked how he would feel should the data show him and Hammel winning, Wong stated, “I would be very offended and disappointed if that were the case.” He went on to say, “I believe the elections would be improved if the polls were closed on the date they were announced to be closed on.”

While class presidential elections may seem trivial to some, they can have real consequences. The Harvard Crimson reported recently on how the Harvard admissions office ranks its applicants. “Previous court filings have shown that Harvard’s notion of a ‘2’ ranking for his or her extracurricular accomplishments is ‘typically an applicant with significant school, and possibly regional accomplishments: for example, an applicant who was the student body president…” A “2” on this scale is the second-highest ranking possible out of six, putting applicants in this category far ahead of many others in the pool, and giving them a much higher chance of admission. Candidates with “an overall rating of a 1 are always accepted,” according to the Crimson, while applicants with a score of 3 or below rarely get in.

To Harvard and likely many other universities, the title class president shows a level of commitment, initiative, and leadership experience that makes a student well suited to the rigors of college.

Peterson described his responsibilities as president: “the only thing that was technically required of me as senior class president was to be part of ‘officer meetings’ which included approving [purchase orders] for the school (basically approve expenditures of various departments) and moving funds as necessary from the school’s various accounts.”

If presidents so choose, they can exert a much wider influence than just budget meetings. Peterson added, “we chose to be as hands-on as possible so our responsibilities included public relations, talking to admin about things leadership wanted, being part of leadership committees for their various events and projects and so on. We liked maintaining social media and being part of everything we could.”

Our student council system is established as an exercise in democracy, but there was no way to monitor how democratically voters acted, and no mechanism to ensure only the proper votes counted.

Despite several requests, Leadership has declined to comment further on the election, as have Scandlyn and Mills.

Correction: An earlier version of this article stated that Scandlyn has been in leadership prior to this year. In fact, this is his first year in the class.