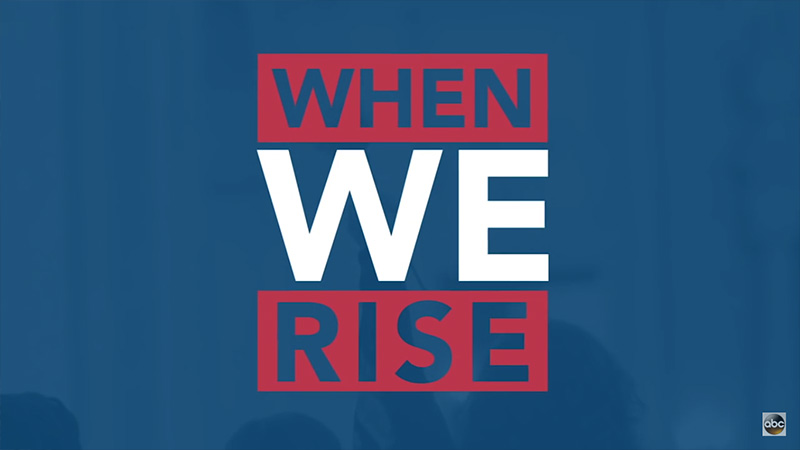 As the final scene of “When We Rise” wound to a close last Friday night, the words “One struggle. One fight” faded onto the screen. This powerful statement perhaps best sums up the message behind Dustin Lance Black’s four-part docuseries about the gay rights movement, which follows the stories of LGBT+ activists Cleve Jones, Roma Guy, Diane Jones, Ken Jones, and Cecilia Chung.

Beginning in the early 1970s and finishing with the Supreme Court decision striking down California’s ban on same-sex marriage in 2013, “When We Rise” is an important reminder of how the fight for equality and justice is never just one narrative, person, or movement, but a never ending story of victories, losses, and people coming together to find their collective power. It is the remarkable story of the gay liberation movement, and how it achieved in under 50 years— as put by Roberta Kaplan in her defense of marriage equality before the Supreme Court— “a sea of change” in terms of society’s acceptance of the LGBT+ community.

M-A’s own drawing and art studio teacher, Dennis Le Claire, is a gay man who lived through this sea of change. “It was a big transition going from being ostracized, and then finding that there’s a whole community that supports you, to going to challenging authority to get rights accepted,” he reflected.

The docuseries’ reminder of this progress comes at a turning point in history, as the current administration and Congress usher in a new age of conservatism that many feel threatens the rights of certain groups. If we are to resist and protect the freedoms of all people, we must remember and learn from the work of those before us. 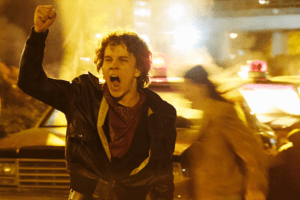 First and foremost, “When We Rise” reminds us that activism requires hope and determination. We witness the bumpy road of LGBT+ rights history, from the election of Harvey Milk, to his assassination; from the Acquired Immune Deficiency Syndrome (AIDS) epidemic, to the Clintons visiting the Names Project Memorial Quilt; from the days where cops brutalized the gay community, to the day where gay couples filled San Francisco City Hall to finally be married. Despite infighting, and personal and political adversity, the perseverance of the activists in “When We Rise” demonstrates the power of a lifelong commitment to justice.

“When We Rise” also shows how activism is always deeply personal. Institutionalized discrimination has very real, harmful effects, that makes it all the more necessary for people from those communities to fight for their rights. Because Guy never grew up seeing anything besides straight couples, she almost didn’t stay with her eventual wife Diane because she couldn’t even imagine what lesbian love or family would look like. Because Ken Jones could never legally marry his partner of 20 years and share the house title, when his partner died of AIDS, he was thrown out of his house by his partner’s family, ultimately turning him to substance abuse. Because Chung was transgender, she was homeless as a youth. Because Cleve Jones was gay, Child Protective Services refused to let him foster parent. Both C. Jones and Chung were violently attacked multiple times for their sexual orientation and gender identity, respectively. 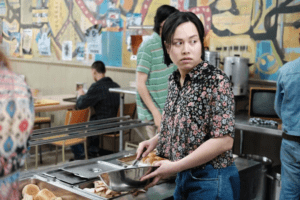 While traumatizing, these experiences also add urgency and meaning to the struggle for justice. For many in the LGBT+ community, being involved in activism was, and for some still is, a fight for their survival. Without this inextricable link between the personal and political, a movement loses its energy.

Likewise, what seems private and personal can also be a means of resistance. While Guy and C. Jones were activists in the most textbook-definition way, organizing protests and rallies, others on the show demonstrated the many less visible ways to support a movement. K. Jones was more of a community organizer, setting up a center for San Francisco’s homeless queer youth, and later in his life became a member of the City of Refuge, a church for queer and trans people of color. D. Jones was a nurse, yet her direct interactions with AIDS victims allowed her to convince Guy to send volunteers from the Women’s Building to care for their gay brothers, whom many others feared or rejected.

For Le Claire, resisting has always been about his personal, day-to-day interactions. “I think just the fact that I could actually make people’s mind change by being who I was was more important than being out there picketing,” he explained. “Being here, being out in my classrooms, being a positive role model to my students I think was more important to me —and still is —than being an active participant in protest.”

Le Claire added that he is involved with more behind the scenes community work, like participating on the committee that is organizing Silicon Valley Pride this year. 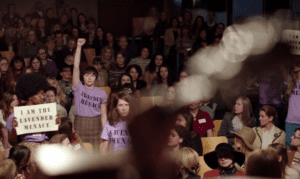 Young Roma Guy (Emily Skeggs) protests with other lesbian feminists at a National Organization for Women meeting, which was notoriously anti-lesbian at the time. Credit: ABC

Perhaps most importantly, “When We Rise” reminds us that activism must be intersectional. The diverse cast of characters shows us that the LGBT+ community meets at a crossroads of identities. Guy was both a lesbian activist and a feminist, helping to found San Francisco’s Women’s Building and also collaborating with C. Jones to get Milk elected to Board of Supervisors. K. Jones was not just a gay man, but a gay black veteran, working for a military anti-discrimination program and later as an advocate for LGBT+ youth. Yet the victories for equality and justice, like the election of Harvey Milk, like universal healthcare in San Francisco, like marriage equality, came when people united across generations and backgrounds and used their collective power to send a unified message.

“The biggest lesson that we need to take from [past movements] is that it impacts all of us,” Le Claire remarked. “I feel that we’re not just little groups. We need to be there for each other; what affects one group of people is going to affect all of us if we don’t stand up for each other.”

This is not to say that achieving true solidarity is simple or easy. Because oppression manifests itself in so many different ways and against so many different groups, the path to justice is not a one fix solution. Constant dialogue and a working relationship to build understanding and trust between different communities is necessary in victories for all. What’s most important is listening to each other and understanding the every struggle is rooted in the same basic principles of human dignity and equality.

One notable identity left out of “When We Rise” is the bisexual community. In part, this is due to bisexual erasure in lesbian and gay circles at the time, where the identity itself was not considered valid. This sort of invalidation, while less than in the early days of gay liberation, persists today, and could be part of the reason that the story of bisexual activists was absent from the series. In reality, numerous bisexual activists existed at the time and were crucial in the fight for rights for the LGBT+ community.

In the closing scenes of the first episode, Guy visits the Black Cat Café, trying to figure out how a queer bar got a permit and stayed open so long in her quest to get the Women’s Building approved. She’s defensive, expecting the gay men and drag queens there to be hostile to women’s rights, suggesting that they might be “afraid of us having something of our own too.” Trans activist and famed Black Cat performer José Sarria replies, “The secret, my dear, is that ‘us’ vs. ‘them’ is an illusion.” She gestures at Guy, C. Jones, and K. Jones. “All of you combined, locked arm in arm, are stronger than you know. You could lift us all up.” 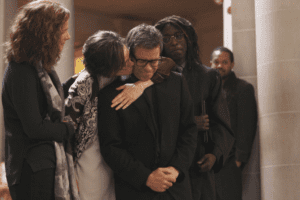 Sarria was right. What these activists achieved for the LGBT+ community was remarkable, and now that their stories have been told, it is up to the next generation to carry their legacy. “The most important thing that I’ve found over the years is that the youth is what is going to maintain or let go of all the rights,” Le Claire reflected. “I think with youth our legacy is that activism, and… it’s important that we get you involved in that process and not let you feel like it’s not a worthwhile thing, that it’s a done deal or that it’s not worth fighting for, because it is worth fighting for.”

At the very beginning of the first episode, in an interview with a student, C. Jones said, “Each generation has its own epic confrontations it must face.”

Now is our time.