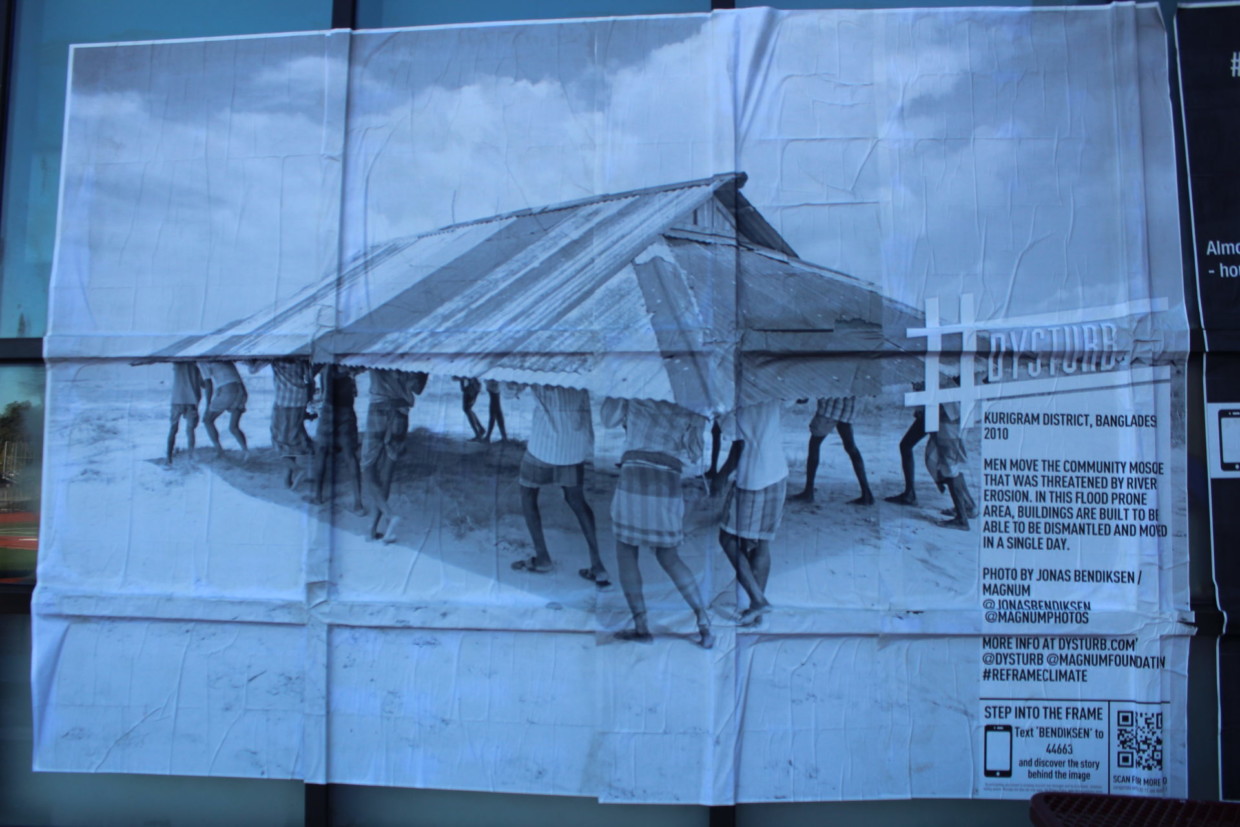 A few weeks ago, an artist from the Magnum Foundation installed a wheat paste photo on the window of I-2, overlooking Coach Parks field. The large, black-and-white photo, taken by Jonas Bendiksen, depicts men carrying a portable mosque through the Kurigram District of Bangladesh in 2010.

The area is prone to flooding because of soil erosion, so most buildings are designed to be disassembled and moved in a single day. Most residents of Menlo Park do not experience the effects of climate change in their daily life, but people in places like Kurigram must shape their lives around a rapidly changing landscape. Photography teacher Sarah Frivold said, “I love the way instillation is interactive and how you can see the photo life size, you can read the information, you can watch a video about the artist talking about it… I love that there are so many ways for students to get to this really cool information.”

So, what is wheat paste? Literally, wheat paste is a liquid adhesive made from wheat flour or starch and water, which has been used for centuries for paper mache, decoupage, book binding, collages, and hanging posters to walls. In recent decades, street artists have taken to putting up creative wheat paste art in public places, from New York to Berlin to Paris. 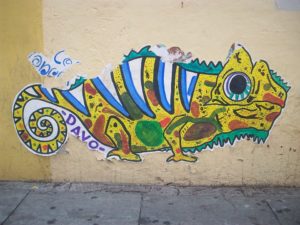 A colorful example of a wheat paste mural.

The allure of wheat paste is that it is cheap and easy to make, and the adhesive is surprisingly strong. An artist simply mixes the paste, applies it to a flat surface, places their art on top, then coats the poster or mural with another layer of paste until it is soaked. The installations can last days, weeks, months, or even years, but the wheatpaste will naturally erode with wind and weather. Part of the expression of wheat paste art is that it is part of its surroundings, and is not meant to be permanent but rather to change as the landscape around it changes.

The wheat paste poster in the I-wing is part of Magnum Foundation’s #Dysturb and #reframe climate initiatives that began during the Paris Climate Change Summit in 2015. The goal of these works is to show the parts of climate change that are not usually visible, especially to people living in developed countries. When most people think of climate change, they might imagine a polar bear on melting ice caps, or a koala left without a tree, but the truth is that changing temperatures, rising sea levels, and unpredictable weather are also affecting millions of people across the globe. A devastating earthquake, tsunami, and subsequent flooding have been wreaking havoc in Indonesia for the past few weeks, yet coverage of the disaster in the U.S. is painfully thin. 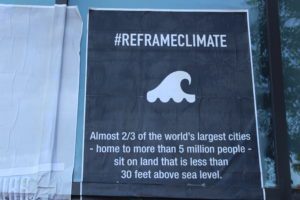 The #reframeclimate movement brings attention to the effects of climate change in developing nations.

It is this lack of awareness of the magnitude and severity of the issue, and the threats it poses to human health and safety, that Magnum hopes to counter with measures like wheat paste installations. Their website states, “#Dysturb and Magnum Foundation’s #reframeclimate initiative challenges the stereotypical notions of what climate change looks like in order to expand and deepen perceptions about its many implications.”

Ignoring climate change, even for a few days at a time, is a luxury only afforded people born into privilege and living in places where wealth and infrastructure cover up its effects. Frivold worked hard to bring this photo to M-A, and she added, “I hope it starts a dialogue about art and climate change. I hope that if people see it, they take a closer look at it, I hope they get curious about how it was pasted, about who took the photo, about what the photo means and where it was taken.”

Frivold heard about the project after connecting with a student, whose family friend founded the Magnum Foundation. She attended a talk with members of the reform climate initiative, “and we got to meet and discuss art and photography with these really amazing, down-to-earth talented photographers who are at the center of this specific exhibit in correlation with Magnum Foundation.”

Frivold hopes that as many people will see the wheat paste poster as possible before nature removes it. M-A is truly lucky to be part of  movement seeking to bring equality and awareness to global climate change, especially because Magnum Photography is, as Frivold puts it, a big deal. Founded in 1947 by Robert Capa, Henri Cartier-Bresson, and others, Magnum’s members included the legendary Dorothea Lange, Ansel Adams, and many more. Their photojournalism is internationally revered and still taught in high schools and colleges. To be welcomed into Magnum’s movement was thrilling for Frivold, who said, “it makes me feel connected, to art, to artists, to photography, to all the other schools— locally and around the world— that got to participate!”

If a picture is worth a thousand words, then M-A’s own wheat paste poster speaks volumes about how creativity, collaboration, and a willingness to learn can truly change the world and bring awareness where it is sorely needed. The photo will remain on the back of I-2 until it naturally weathers away.