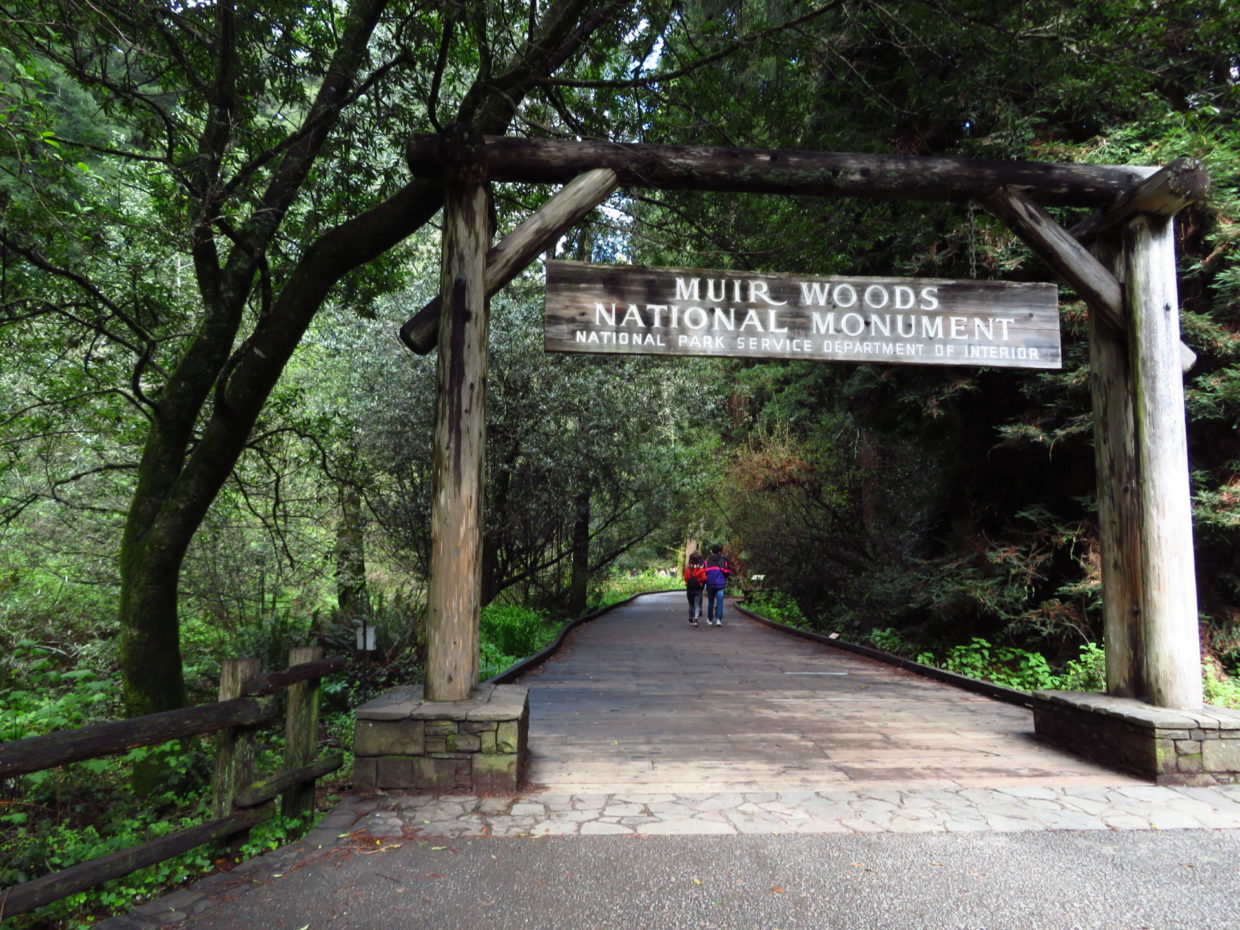 Weekend Wayfarer: Muir Woods and the Origins of the NPS 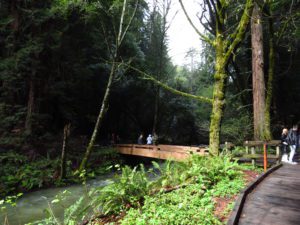 Part of the trail at Muir Woods.

Muir Woods, contrary to what the name seems to imply, bears no relation to John Muir himself. Muir, in fact, spent little time hiking in this particular region, preferring the Sierras, the northwest, or seemingly any area other than Muir Woods. This is not hard to believe; at 554 acres, the national monument pales in comparison to something like an Olympic, or a Yosemite National Park.

While maybe not comparable to what he did spend his time hiking, Muir Woods nonetheless serves an important purpose, in relation to Muir. The national monument stands in testament to what Muir, among others, accomplished: creating a National Parks Service, and attempting to bring preservation to the mainstream. 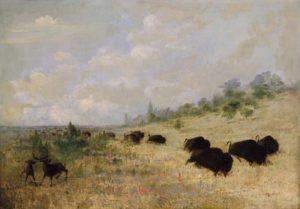 Catlin’s Elk and Buffalo Grazing among Prairie Flowers, Texas circa 1848.

However, preservationism and the national parks system did not begin with Muir. Instead, the idea of organizing American wilderness into more accessible national parks is often attributed to George Catlin, a painter active through the early 1800’s. Catlin’s work consisted primarily of the landscapes of the new western frontier, and as such, he was one of the few people of the time truly qualified to speak on such a subject. In 1832, Catlin wrote that the natural splendor of the United States should be put “by some great protecting policy of government… in a magnificent park… a nation’s park, containing man and beast, in all the wild[ness] and freshness of their nature’s beauty!”

While this preservationist sentiment resounded with some forward-thinking artists of the day (think Thoreau or the Rocky Mountain School), very little legislative action was taken. Not until the early 1870’s did Catlin’s idea begin to come to fruition, with the establishment of Yellowstone as the country’s first national park. It was around this time that Muir first moved to San Francisco, from which he had access to such resources as Yosemite, serving as inspiration for his later book, My First Summer in the Sierra.

Muir, through the remainder of the 1800’s, threw himself entirely into his work as both a writer and activist. This culminated in Yosemite earning the status of state park in 1890, and the Sierra Club in 1892, of which he was co-founder. Needless to say, by the turn of the century, Muir had placed himself at the forefront of the preservation movement. 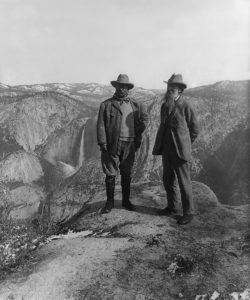 At this point, Muir had become a household name, his image synonymous with the parks movement as a whole. The White House was no exception to this, and Theodore Roosevelt, newly president, took great interest in Muir. Roosevelt was an avid outdoorsman, spending much of his life before politics out west, most notably in the Badlands of North Dakota. Muir, rightly, saw this potential connection as an opportunity to further his preservationist agenda. Muir invited the president to Yosemite in 1903, serving as an ambassador, of sorts, for the remaining unprotected wilderness of the country.

Roosevelt, over the course of his presidency, signed five national parks into existence. More importantly, however, Roosevelt pushed the American Antiquities Act through congress in 1906, essentially allowing him to protect sites of natural and cultural significance from development, without needing congressional support, unlike with the creation of national parks. In the remaining few years of his presidency, Roosevelt took full advantage of this new power, establishing eighteen so-called “national monuments.”

Simultaneously, a Chicago businessman purchased 611 acres of land just north of San Francisco, with intention of making it one of the new national monuments. William Kent, the man in question, donated 295 of the acres to the federal government. In 1908, it became one of Roosevelt’s eighteen monuments. Kent later was elected to the House of Representatives. 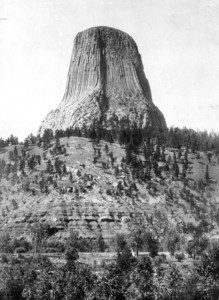 Devils Tower, Wyoming. The first of the national monuments, photographed in 1900.

Kent, in 1916, sponsored a bill to establish the National Parks Service (NPS); up to this point, national parks had been managed by the secretary of the interior, not an agency. This new organization was set to oversee operations of parks, monuments, and reservations, to “conserve the scenery and the natural and historic objects and the wild life therein.” Meeting little resistance, Woodrow Wilson signed “The Organic Act” into law on August 16.

Thus, a primordial form of the parks system was established, with control over 14 national parks, and 21 national monuments, one of which was Muir Woods. By the end of the decade, Kent left Congress, Roosevelt and Muir died, and Woodrow Wilson was replaced by the anti-reform minded Warren Harding. The national parks movement, as Americans knew it, had come to a close.

So, does Muir Woods do the origins of modern preservationism justice? Yes, and no. The park is indisputably beautiful– how such massive living things can exist is beyond understanding– but it simply isn’t a good reflection of the core principles put forth by those like Muir. In its current state, the monument is more of a tourist attraction than a tribute. Accessibility isn’t the issue– Muir Woods is very accessible to people of all levels of hiking ability, which is great. The issue is in the commoditization of the natural splendor of the site, in part a result of its accessibility. 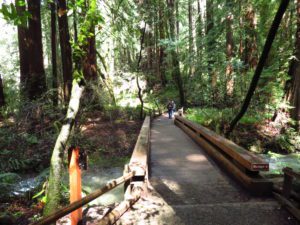 In making the monument so accessible, in presenting the grandeur of the trees as a novelty, the experience as a whole becomes trivial. Entering the park becomes one succinct thing– like going to the Eiffel Tower in France, or to Times Square in New York– in that it feels curated, as well as disconnected. It isn’t wilderness, it’s Muir Woods: an experience made to fit consumer preferences, when what should dictate the time spent at the monument is nature itself.

In an effort to avoid sounding too bitter, the fact that people are spending any time at all in nature is most certainly a good thing. In this way, Muir Woods begins to accomplish one part of what Muir set out to do: bring preservation to the mainstream. Even if the monument is dotted with gift shops and cafeterias, in an effort to make a walk in the woods more palatable to consumers, does that really negate the message of preservation that was meant for the monument? On the other hand, doesn’t the rampant consumerism which engulfs the park counter any value borne of its magnificence? 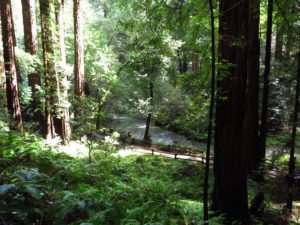 One can hope that the monument can serve its purpose— standing in testament to the importance of the protection of natural beauty— and that this message isn’t lost on the beholder. In the meantime, however, if Muir Woods get people in nature, even if for the wrong reasons, it isn’t a bad place to start.

Muir Woods, despite how this may read, is still a pleasure to visit. With the right frame of mind (in other words, actively blocking out the gimmick-y and tourist-y stuff), it can make for a breathtaking, albeit short, walk. The redwoods are really all they are cracked up to be, and the wooden walkways that assume the place of trails are actually a welcome change to the standard, knee-twisty dirt paths crisscrossing most other parks. Additionally, after hiking the entirety of the park in about an hour, Mount Tamalpais State Park is very accessible, and a great extension if a couple mile walk isn’t reason enough to justify the two hour plus round trip up to the monument.

Also, to avoid walking an additional two miles to the monument, from the town outside Mount Tamalpais State Park, reserve a parking spot beforehand.