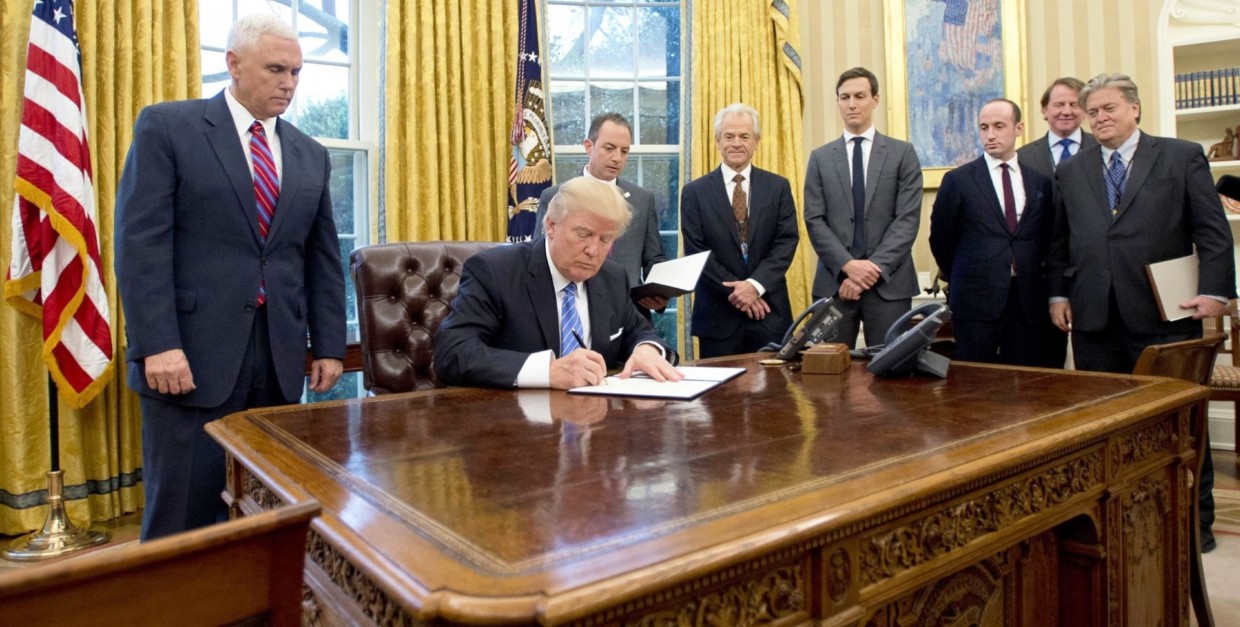 On Tuesday morning, President Trump announced his decision to rescind the Deferred Action for Childhood Arrivals (DACA) program, following a six-month delay in which Congress may pass further legislation. Not only are one in four people affected by this act living in California, but many of them are part of the M-A community. Some students bravely shared their reactions to this jarring announcement.

DACA, a program created in 2012 under the Obama administration, allows many undocumented immigrants who were brought to the United States as minors to receive legal protection and work eligibility for a renewable two-year period.

These benefits will begin to be phased out in six months, but almost immediately the shock of the announcement has translated into anger, fear, and emotional turmoil in the hearts of many Americans who are personally affected by DACA, whether they themselves have benefitted from it or have seen its influence on those around them.

In its five years of action, DACA assisted some 800,000 immigrants who applied for the program to receive work eligibility, social security benefits, and protection from deportation. These immigrants were brought to the United States as children, often too young to remember their country of origin, and have known America as their home for most of their lives. This country has become a sanctuary for them, a familiar land of opportunity and support. Young people who have spent years building a life in the United States, who speak English and understand the culture of their American communities, would likely feel out of place, even foreign, in the countries they would be deported to. The fear of being separated from their families or being forced into a life they do not belong in is suddenly all too real for Dreamers across America.

While Congress and the public are left to battle over a subsequent plan of action, the impending removal of DACA has already had a piercing emotional effect on students at M-A and their loved ones, and their experiences bring this controversial national issue into the M-A community in a way that should not be overlooked.

M-A and the administration make it clear that this campus is a welcoming space for anyone who comes to learn, and does not look into whether or not students’ families are documented in order to protect this sensitive information and keep every student safe from potential legal consequences.

High schoolers are some of the youngest and most vulnerable Americans currently benefiting from the program because of date requirements for entry into the country.

Senior Itzel Villa Bautista benefited from DACA starting this year, and under its protection, she felt safe living in this country. She heard rumors that President Trump might take action, and on Monday she said, “I was up all morning looking at the news and I hadn’t seen anything specifically. It wasn’t until I got to my government class and the question of the day was how do you feel about it ending, and right at that moment, I felt my eyes getting watery. At brunch, I met one of my friends, and I just went up to her and let it all out, just straight up crying. At that moment it didn’t matter who was watching or what was being said. It’s sad, you know, it’s scary.”

Bautista explained that with DACA, she felt safe, and knew she could walk around the streets without fear of a police officer coming up to her and saying she had to go. She added, “Although it’s still there, I still kinda feel like it’s gone already, I don’t feel it there, I don’t feel the same safety even walking home.”

Another student said that upon hearing the decision, “The first thing that came up in my mind was, what are we going to do next?”

This same student has two siblings who also benefit from DACA, and as she talked about what it might mean for them, she struggled to talk through tears.

What worries Bautista the most is that she has two younger siblings, and she hoped that when they reached 15, they too could enjoy the safety that DACA offered. She added, “it did scare me because I am going to have it taken away, but it hurt me the most because I know that they aren’t going to have it.”

After having the protections of DACA for less than a year, Bautista feels that it’s been taken from her too soon, and though she will receive its benefits for another year and a half, she admitted “I just feel like time goes by really quick, you know, and like I said I don’t feel like it’s really there anymore even though it’s there until it expires. I don’t know if there will be anything to replace that or any type of alternative.”

She spoke of the thousands of questions running through her head and said that she wished she could ask the President why. “The biggest question is why, I want to ask him why and I can’t do that. Sometimes I feel like I don’t have a say or a vote just because I’m not from here,” said Bautista.

This decision undermined the voices of young people who love the United States and who are proud to call it their home. For Bautista and surely many others, this announcement made her want to take action to make her voice heard in government.

One student said, “When you’re at a protest, you feel proud of who you are and what you’re doing or your people, because just sitting down and not saying anything, it just hurts you. It’s your people and you would do anything to be here and have a better life like our parents did.”

This fighting spirit is the most hopeful thing that has come out of this decision, for Dreamers and those who support good people who belong at home in the United States. As one student succinctly said, “We’re not just going to sit here and let them take us back, you know, we’re going to fight to be here and show them that we can do it.”

Bautista’s wish to voice her concerns directly to the President may be impossible, but if people across the country will fight to protect the most vulnerable people and refuse to be silent, perhaps America as a collective voice can shout this message so loud that it will ring across the country and straight through the doors of the Oval Office.