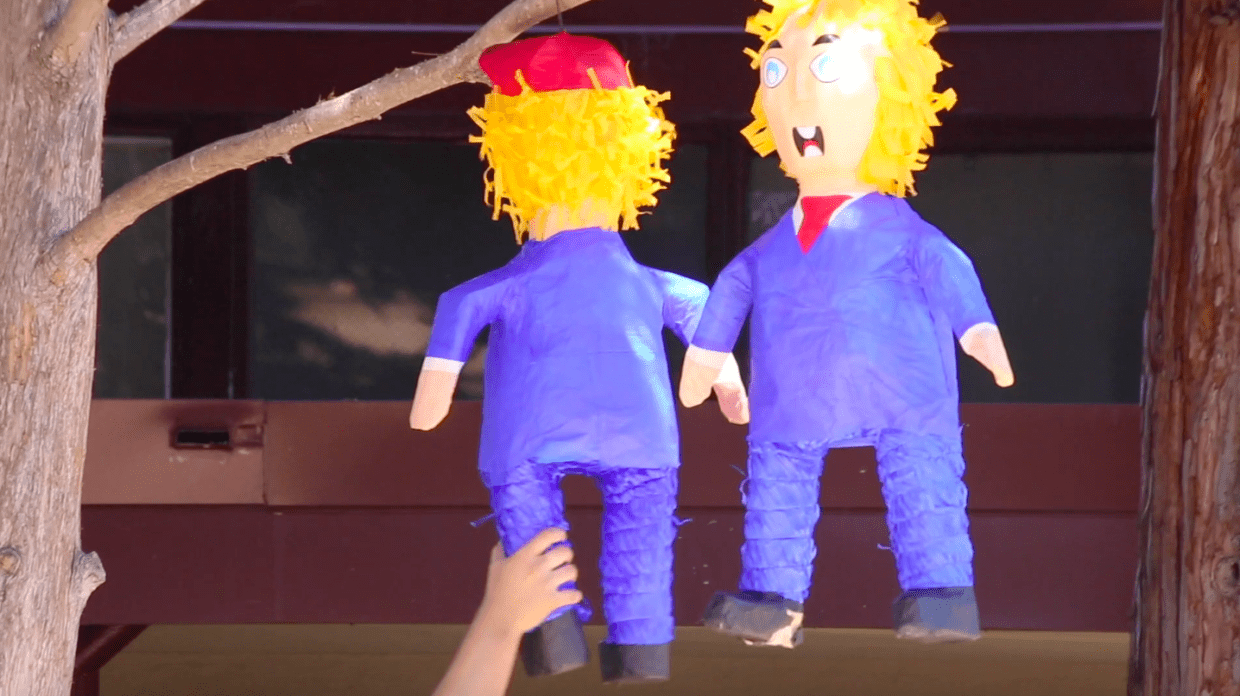 The repeal of Deferred Action for Childhood Arrivals (DACA) has had an immediate and strong effect on the M-A community. Groups of students organized events around school campus this past week to enable discussion and create a supportive environment for peers affected by the recent actions of our government. Speakers were in the G wing on Wednesday discussing the repeal’s effects on students at M-A, and a ‘sit-in’ protest was planned on the green on Thursday. During this demonstration, students hit a Donald Trump piñata hanging from a tree branch with a bat. 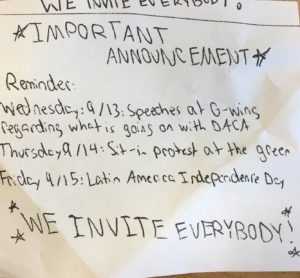 A group of M-A students eager to speak out and create discussion about recent developments created events this week to address this. “WE INVITE EVERYBODY!”

We stand by creating discussion, expressing beliefs, and making students feel supported and safe at school. We stand with the students personally affected by the possible repeal of DACA and making them feel welcome at M-A. However, a violent act such as this, especially in our current political climate, in a school setting, undermines any intended message of love, equality, or acceptance.

After some students spoke out, the leaders of this event revealed a Trump piñata and called for volunteers. Students vigorously knocked the piñata down with a wooden baseball bat, kicked the head off, and continued to bash the piñata of Trump as it lay on the ground. Some students watched speechless while others cheered. As students who do not support the repeal of DACA, we were none the less left startled and felt awkward as we watched the demonstration.

This demonstration may have been intended to display the resilience of our active student body, to promote equality and love in a harsh time in our country, and to create a supportive community. However, it instead had more unsavory effects. While we realize a hostile environment may not have been intended, the message sent by this display is wrong. It seemingly encourages violence in a place where acceptance and support are needed instead. 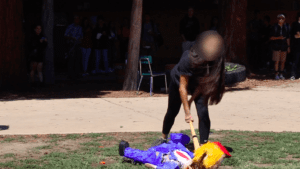 A student hits the piñata with a bat. Credit: Erica Miner.

School should be a place where all students should be able to express themselves freely and to learn in safety without fear. No matter one’s opinion of Trump or what is happening in the political sphere, the message sent by this scene is neither supportive nor constructive. While we understand the frustration these students may have, these actions do not send a supportive message, and should not have taken place on our school campus where students are legally obligated to attend.

Making a piñata of the president of the United States and beating it with a baseball bat is not appropriate for a learning environment, and may make certain students feel more threatened than comforted. While many students do not agree with the repeal of DACA or Trump’s actions, others may feel differently; they deserve to feel as safe and welcomed at school as anyone else.

To do this on the green, which acts as a public forum and quad for the M-A community, will only further split apart two sides while scaring uninformed bystanders. A student who may not know what the event is about, that see’s a baseball bat being used as a weapon, may lead them to question their safety and inclusion. Unfortunately what could’ve been an event to promote equality, strength, and love, turned into a hostile affair.

The M-A administration and staff have been very supportive of protests and open discussions at school in the recent past when peaceful demonstrations have taken place, however, it should be questioned whether or not they are truly protecting every student’s safety and mental well-being. We believe that some of our staff and student body are failing to see the reality of our school. There seems to be a relatively liberal consensus of our staff and student body which is not uncommon, however, there are undoubtedly students whose beliefs differ from this consensus. 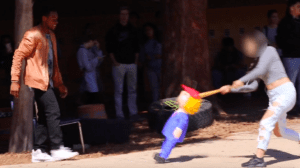 These students may feel too intimidated or alienated to share their opinion or take part in open discussions that have taken place at M-A because of what people might think of them. These students may very well have been frightened or offended by this demonstration that was openly supported by peers both in the form of cheers in the crowd or on social media platforms such as Snapchat.

The fact that the M-A staff provides a platform to express our opinions is welcomed. However, in this situation it crossed over to a point of being potentially intimidating, swinging a baseball bat in this manner is intimidating alone. This was simply not an open discussion, peaceful protest, informative speech, or a ‘sit in’. This was an event that created controversy, promoted violence, and left many students speechless.

With our school slogan being “Strength in Diversity,” does this kind of display reflect what our school is aiming for?

This public display of violence during what was supposed to be a peaceful ‘sit-in’ is not only completely inappropriate for a school setting but also makes the group that organized these events forfeit their intended message and lose their credibility. In a time where our country stands in constant argument, racial tensions, indefensible prejudices, unwarranted violence, and an overall lack of equality, our student body should not be promoting violence no matter who it is directed towards, and our school administration should not have allowed this demonstration to cross this line.

As a student body, we should be attempting to come together for each other, despite our political beliefs. Our administration, staff, and peers should be accounting for all students’ beliefs, safety, and mental health. We fully support the intended message of this protest, and freedom of speech that has been utilized at our school. We do not support the hostile actions that promote violence and may create fear in our community.