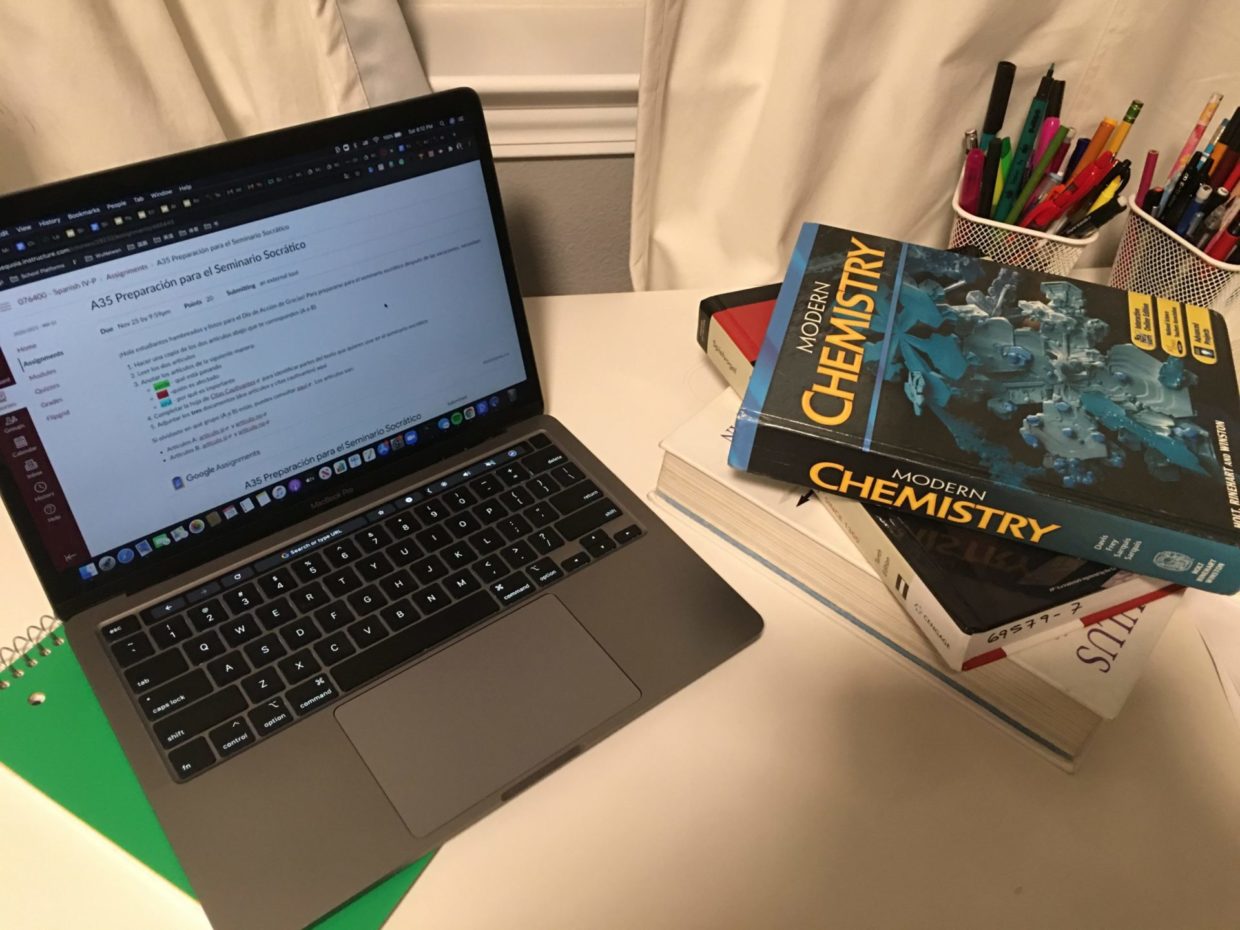 With finals approaching this semester, M-A teachers are in the process of finding new tools and methods to account for the obstacles of distance learning. Some have even shifted their objectives to favor a more holistic approach.

Finalized testing schedule. With the zero and seventh periods, teachers have the flexibility to modify their testing for students with extended time without having to use time outside of the school day.

In select classes, internet connectivity is an inconvenience for students when taking tests. English Language Development teacher James Nelson explains, “some of my students are on phones, so they can’t open anything besides their Zoom screen or they’ll drop off the call.” Moreover, “students are hesitant to turn on their cameras and mics because of their backgrounds.”

He explains that because of this, he rarely hears his students speak. “That’s a problem,” he said, “because I need to hear their pronunciation, fluidity, and cadences.” In response to these difficulties, Nelson said he will assign a cumulative oral assignment on Flipgrid, which is a recording platform that allows students to take the test at any time, as well as other assignments, such as sentence corrections.

For physical education, freshman P.E. teacher Amanda Bianchi said she will assess students’ exercise using the app, FitLife, which the class has been using to film themselves do workouts. She also said, “We will use Canvas for an in-class multiple-choice true or false test about our nutrition unit.”

For AP teachers, the cut to class times is a challenge since they must prepare students for their AP exams in May.  “Normally we’d have three 50 minute classes and one 90 minute class,” said AP Art and AP English Language teacher Liane Strub. “Now, with online learning, you just can’t teach the same amount of material.”

Most said they would give the same tests, although with some modifications. For example, Strub said she will remove multiple-choice from her finals, saying “I’m concerned about creating an unfair situation in which people who are unscrupulous benefit and people who are honest, lose out.”

AP Chemistry teacher Matthew Sandora shows more optimism in regards to using the internet on tests. “What the students have been reporting to me has been that they just don’t have time to search questions up,” he said, “meaning they have to use their own knowledge, which makes me happy.” For his test, he explains “it is going to be a similar kind of thing I’ve done in the past years, 60 multiple choice questions and then two free-response questions.”

Some teachers are favoring a more interactive approach. Gender Studies and AP US History teacher Anne Olson said, “In at least one of my classes, there will be a Socratic seminar for a final. Also, given the internet can be so unreliable, I will likely have at least a portion of my final be something that they’re working on ahead of time and that needs to be submitted by the end of the final period, to give students a little bit more flexibility.”

This year, Olson is using standards-based grading and emphasizing historical thinking skills in her U.S. history class. She said, “I want everything to be purposeful and transferable outside of the class. With Gender Studies, it’s like the same idea of what will impact students in the long run, as opposed to just what’s most important given the context of my class.” Because of the loss of in-class time, she also said, “when I assign my finals, that will be 100% based on my students, where they are, and what they’ve learned this year, knowing that I can’t test something that I used in another year.”

As distance learning has been stressful for students and teachers alike, some teachers want to reduce the weight of their finals. Sandora said, “I will make the final out of a certain number of points, but I’ll curve it depending on how well the students do. We’ll see if there is a difference from previous years.”

Strub explains that she does not weigh her final. For example, “an essay wouldn’t be any more points than all the other in-class essays we’ve written up to that point.”

Teachers understand the pressure for finals this year given the new learning environment. “We are on the same side. We want to help you. And if you are struggling, we want to help you with that,” said Nelson. He also encourages students to be honest in their exams. He said, “One of the things that I would recommend to students is, whatever grades you end up getting, let those grades actually be your grades. Don’t be afraid of the consequences of failing– work hard, know your stuff, but be honest.”