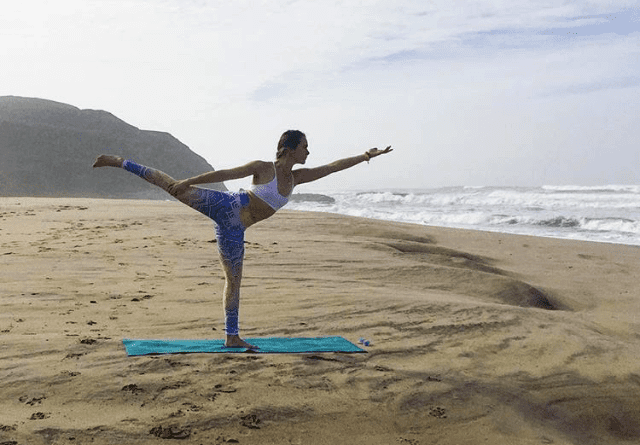 Students share the role of yoga in their lives

Nowadays, more and more people turn to yoga as a way to cope with stress, gain strength, improve health, and much more.

Bailey Lentz, a junior at M-A, turned to yoga in order to recover from an eating disorder.

For about a year and a half, Lentz has been working at Studio Rincon, a yoga studio in Menlo Park. She started working at the studio as a way to earn money during the school year but soon grew interested in yoga. 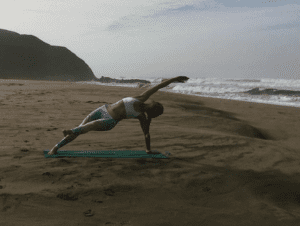 Bailey Lentz doing a pose on the beach. Credit: Lentz.

About six months later, Lentz was hospitalized for anorexia. Lentz explained how her anorexia was considered “atypical” because of difficult living conditions.

She says she was “living with my dad at the time, and he didn’t have enough money to pay rent, let alone feed me properly, so I didn’t eat out of necessity.”

Lentz says her “downhill spiral and increased tensions with [her] father” led her to seek help from her mother, who soon after took her to the hospital.

Lentz recalls doctors telling her they wanted to get her “vital signs stable and get [her] discharged as soon as possible.”

She confessed this made her feel “like an inconvenience,” which made her turn to eating habits similar to “typical” anorexia.

Lentz elaborated on her brief stay at the hospital, which included “Forced bed rest, not [being] allowed to wear shorts, more craft time than Martha Stewart could ever use, and four hours of ‘school’ on school days which were mostly entirely unproductive.” 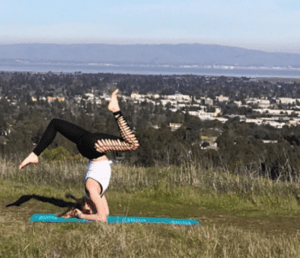 After being discharged so quickly, Lentz returned to her work. She admits she had difficulty dealing with compliments on her new frame, “The positive attention led me to obsession.”

Meanwhile, Lentz was put on serious activity restriction, which she described as “crushing.”

During this time, she was almost hospitalized a few times, before she decided to try vinyasa yoga, a low-impact way to improve strength, endurance, and flexibility.

Lentz confessed yoga has played a very significant role in recovering from anorexia and its psychological effects. “It has changed the way I feel about myself and about every person around me, about body ideals and fitness and our nation’s obsession with perfection.”

Lentz continued, saying yoga is also a reminder of the constant decision she must make to continue maintaining and improving her health, and reminds her of “how strong I am for having taken the reigns of my disorder.”

“Recovery isn’t a decision you make one time, it is a decision you have to make for yourself over and over again… If one day you don’t make that choice, then there’s always the next to get back on the road to recovery.”

Kelsey Gage, another junior at M-A, decided to begin working with Lentz at Studio Rincon over the summer. Gage says Lentz invited her to take a class before she had actually gotten the job, and eventually led her to begin doing yoga.

As a junior, Gage says she must deal with a lot of stress from school and turned to yoga to help relieve it.

For Gage, yoga “promotes full body wellness, because it’s all over your body as opposed to when you’re working out at the gym and you’re usually working on one muscle. You really get into a good place while you’re doing it and feel really comfortable with the people you’re doing it with.” 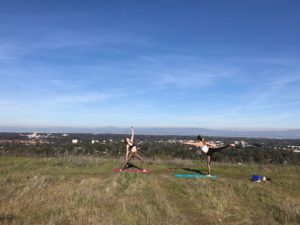 She says that yoga also has a spiritual aspect, but believes “it’s something that’s not really required for people.”

When she is stressed, Gage says she does a pose called Ujjayi breath. “People have described it as your ‘ocean breath’ because it sounds like waves going in and out. You do it in your throat and it makes noise, but it’s like really deep breaths which is good for your body and it signals your body to calm down.”

For high school students, Gage recommends a pose called Shavasana. This pose, called corpse pose, is the final pose in yoga classes, where they play slow, meditative music and lie down on their back to relax. “It feels great, it’s great for you, and it can be really necessary when you need to wind down. It would be really cool if more people got involved in that because we’re all high school students. This is really good for perspective and for breathing.” 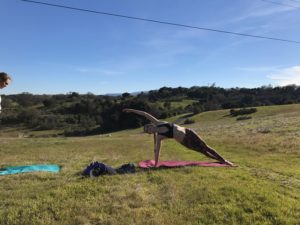 Gage believes anyone can do yoga if they are open to it. “I know there’s a lot of stereotypes, especially in this area. I think that if people are too focused on how yoga is only ‘for ridiculous hippies’ or for ‘the yoga moms,’ then you’re never going to get the benefits,” she laughed.

M-A administration was interested in bringing yoga to M-A, so Lentz and Gage created the Yoga Club. Every few Fridays, either a yoga teacher or the two juniors lead a session in the new dance studio, and the club also has sessions during feel Feel Good Fridays.

Through practicing yoga, these M-A students were able to overcome issues faced by many teenagers in their lives.