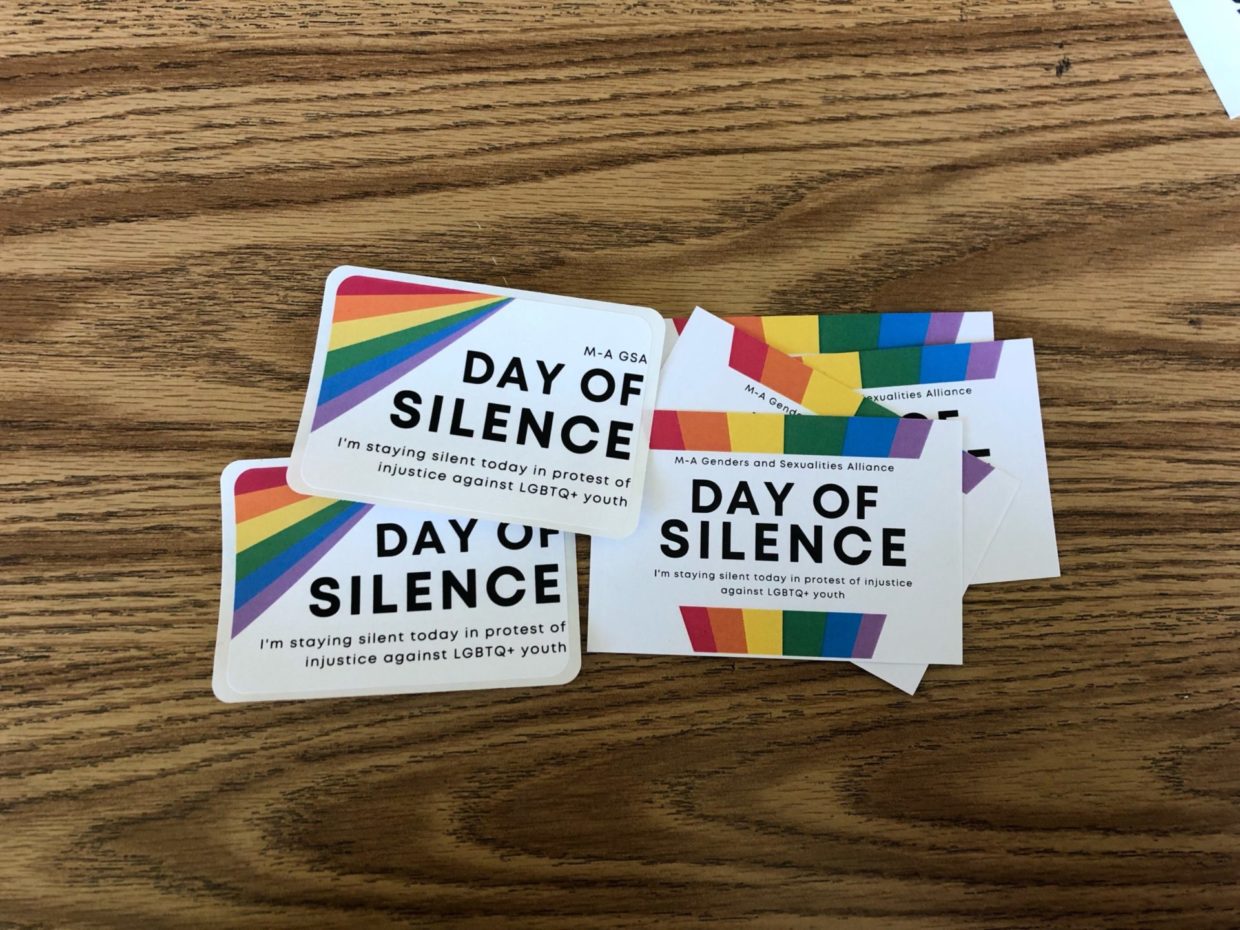 On Friday, April 22nd, many members of M-A’s Genders and Sexualities Alliance (GSA) participated in the Day of Silence, a national, student-led day of protest started by the Gay, Lesbian & Straight Education Network (GLSEN) in the mid-’90s. For the whole day, participating students took a vow of silence to protest the discrimination and harassment LGBTQ+ people face in schools every day.

GLSEN’s website has graphics showing that “Over 4 in 5 LGBTQ students don’t see positive LGBTQ representation in their curriculum, nearly 9 in 10 experience harassment or assault, and almost a third miss school because they feel unsafe or uncomfortable.”

According to the The Trevor Project, “LGBTQ youth are more than four times as likely to attempt suicide than their peers.” It estimates that “more than 1.8 million LGBTQ youth (13-24) seriously consider suicide each year in the U.S.—and at least one attempts suicide every 45 seconds.” Day of Silence aims to bring awareness to these issues and start a conversation on ways to make schools more inclusive. This year, M-A’s GSA’s goals include making the all-gender restroom more well-known and accessible, creating a more accessible gender-inclusive changing spance for P.E., making it easier to access name change forms, and more.

M-A’s GSA observes Day of Silence annually, and this year, returned to the tradition of breaking their silence by gathering at the end of the school day and screaming. The majority of GSA members participated this year, many for the first time, due to the pandemic.

Junior Megan Lam explained, “Day of Silence is a day for queer and LGBTQ students in M-A’s community and elsewhere throughout the nation to really show how important our voices are, and to really drive home the point that our community matters and our rights matter, and our existence needs to be respected.”

Lam said, “I want to make my voice heard through the silence and the silence of other people participating. I want to have my identity respected, and I want to be a visible part of our community on campus.”

Freshman Benjamin Weiss said, “I’m participating in it because I’d like to show my support for the community because it’s important that this isn’t about politics or anything. This is about basic human rights and those that have been denied to people, which need to be given to them because they are human rights. Everyone deserves them.”

Participating members used note cards and stickers to let others know that they were participating in Day of Silence.

Freshman Jasper Bohen said, “It was interesting just not talking the whole day.” To get through the whole day, he said, “There were a lot of large arm movements. Lip reading, that was big. And writing.”

Weiss said, “My day was fine. Trying to not break the silence was hard. A couple of times, I think I might have slipped up. In sixth period, I gave up because we were dissecting pigs for biology and I had to talk so I could communicate what was going on.”

Freshman Bethany Hyde said, “People were making me have to talk—there were moments where people specifically needed me to speak. I tried to get someone to tell me the time during P.E. and I had a whole game of charades. I ended up just having to draw out letters on the ground like, ‘Yes, I would like to know what time P.E. ends because I’m cold and I don’t enjoy it!’”

Bohen said, “There were a lot of people who definitely weren’t one, respecting it, and two, trying to use it as an excuse to get out of class. There were people who weren’t really supporting it.”

Hyde said, “I had a lot of people try and ask questions about it. Less of like, ‘What the heck are you doing?’ and more of a genuine curiosity. I think they were kind of confused. And they were like, ‘Well, how long do you have to be silent for? Like, can we talk at lunch? Why can’t you talk at lunch?’ I did have some people actively trying to get me to talk.”

Bohen, Weiss, and Hyde all said that they would do Day of Silence again, with Hyde saying, “It was really fun.”

GSA meets in B-3 every Wednesday during flex time. For LGBTQ+ resources, the CDC offers a whole page of them for youth, parents, and educators here.