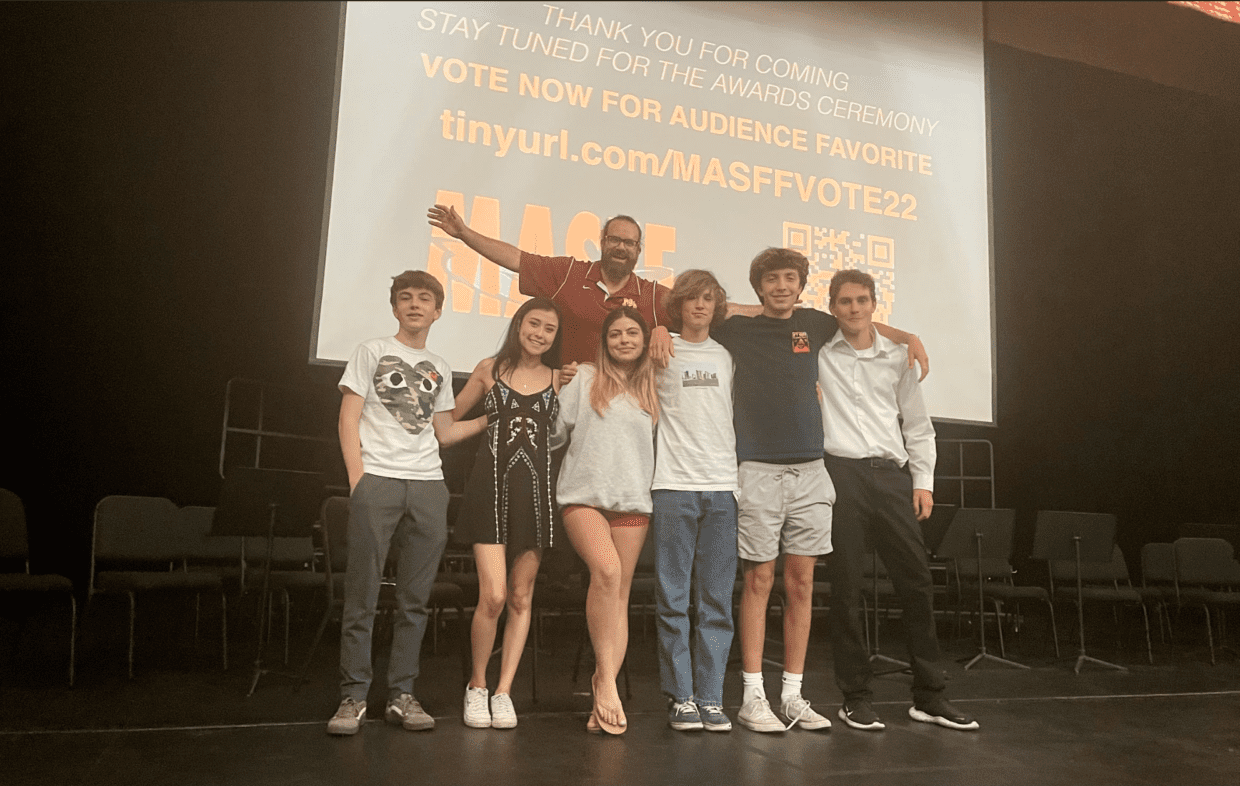 Sophomore Tommy Cope said he enjoyed “being able to take this idea and vision I had, and actually make it possible and film with some of my friends, and just have a fun experience doing it.” Cope directed and edited the film Tempo, which won the Best Overall award.

Sophomore Zachary Gosler, Director and Editor of Mission said, “We had a lot of fun with the process, like setting up shots and things.”

John Giambruno, M-A’s Digital Filmmaking teacher, said that one of his favorite things about watching the films is that “the students use some of the editing tricks that I showed them in the fall and it’s great to see because I’m like ‘oh, they’re listening to me!’”

Despite students’ motivation and the skills they learned over the year, creating a film was still a huge challenge. Sophomore Charlie Wall, co-director and editor of Oren, said that filming days were “long days,” and that “it took 9 hours to shoot all of the movie.”

Cope added, “I learned that there is a lot that goes into the production when you’re making a movie. There’s a lot of scheduling and a lot of takes, and sometimes you have an idea but you can’t get it out there because there are things that limit you.” Students had limited time, budget, and resources to shoot their movie.

Gosler said, “Finding times to film and organizing it is a lot harder than you think.”

The overall theme for this year differed from years past. Perhaps caused by the pandemic, Giambruno said, “I felt like they had a much darker tone this year. Every year I get horror movie submissions but I felt like overall the films were gloomier and doomier this year. The movies were a lot more introspective and existential, a lot of asking ‘who am I?’ type of film. There were a lot of characters questioning their place in society.”

Horror and thriller films like The Creek, Broadcast, Strange, No Way Out, Suffocating Minds, Green-Eyed Monster, and Bait set the audience on edge. Gripping action films like Tempo, Edna and Chip, and Mission heightened the intensity of the atmosphere while comedies like ipsum, Persnickety, Late, The Test, Oren, and Nonsense offered comic relief. We Come in Peace, the only animated film–and only submission from a student not currently in an M-A Digital Filmmaking class–was vibrant and compelling. The drama Numbers, a film about the devastation of eating disorders, was raw and insightful.

At the end of the evening, the jury panel of 14 voted for films in four categories: Best Editing, Best Cinematography, Best Screenplay, and Best Overall. The audience also voted at the end of the night to determine the Audience Favorite.

The winner of Audience Favorite will be announced Tuesday, May 24.

Giambruno said, “All my classes this year are so on top of things–they’re just so good. They want to work, they like working, and they like taking what I show them and doing more.”

Overall, the night was a great success that celebrated both the hard work of students over the past six weeks and the techniques they’d learned throughout the year in their classes.

In order of appearance:

The Creek, Directed and Edited by Emma Hamlin

The Test, Directed and Edited by Daniel Villa

We Come in Peace, Directed and Edited by Enzo Kirkman

No Way Out, Directed and Edited by Georges Mhanna

Nonsense, Directed and Edited by Ella Dauskardt and Anika Duszynski