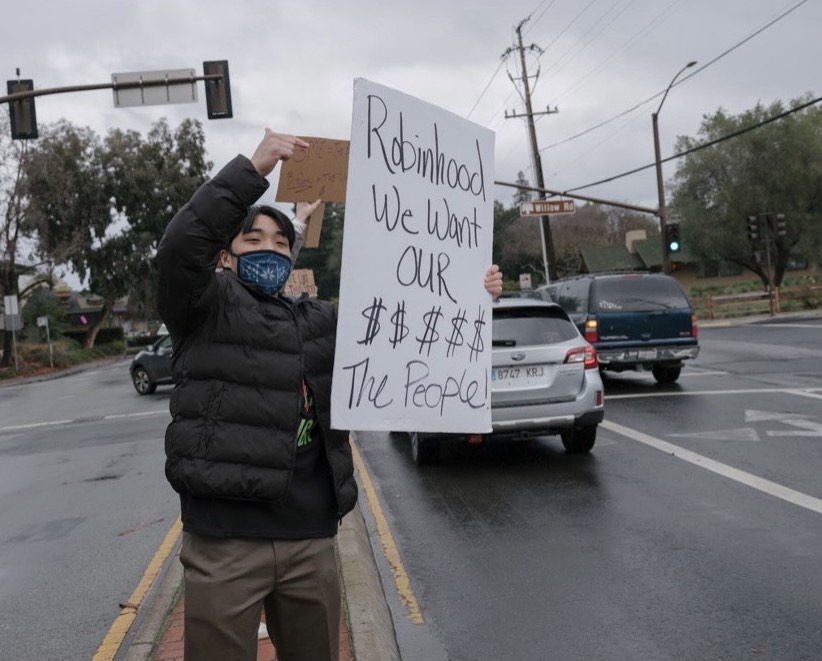 Robinhood Controversy Hits Home for Students and Teachers at M-A

To some students and teachers at M-A, the Robinhood controversy was an event they associated with. The controversy began when hedge funds at Wall Street hedge borrowed millions of dollars worth of Gamestop stock, betting the price of each share would go down, given the gaming company’s past decline. However, last Thursday, when thousands of Reddit users got together to buy Gamestop stock, hedge funds lost millions, some even declaring bankruptcy. Robinhood, a platform for individuals to invest, eventually limited the number of shares people could purchase.

Thursday, seniors Ethan Camarao, Nico Arizini, and Sepand Ahangi took to the streets to protest this restriction at the Robinhood headquarters right in Menlo Park, and were noticed by news outlets such as The New York Times.

“I don’t think what Robinhood did was morally justifiable,” Arizini said, “It’s supposed to be an open market, and people are supposed to buy and sell as they wish. Even though Robinhood claims it’s for people’s best interests, I don’t think they should have the power to prevent people from buying or selling.”

While Arizini and Camarao said they have yet to begin their own investments, their friend Ahangi is heavily involved in the stock market. Arizini explained, “Someone like Sepand has a lot of money tied up in these kinds of companies. He can lose like thousands of dollars, and you know, that’s never fun.”

Ahangi said he started buying penny stock in March when the lockdown began. Now, he is holding shares in companies like Gamestop and AMC which were previously shorted by hedge funds. “There is speculation that hedge funds have been doing something called a short ladder, where they buy and sell their own short positions on counterfeit shares to drive the price down. It’s all artificial price movement,” Ahangi said. “That makes me mad because it scares individual investors into selling their own positions.” He said he plans to hold on to the stock he has bought.

Physics teacher Mr. Hu is another person at M-A who is also involved in investment; while he did not partake in the short squeeze of Gamestop, he said, “I am a big Reddit user myself so there was a lot of connection with the community.” For him, the controversy reminded him of some past events. “This is very reminiscent of the 2008 financial crisis, where Wall Street was once again involved in some very questionable investment decisions. If you remember in 2008, not a single person went to jail for it.”

Freshman Zahara Agarwal, a founder of Real Talk at M-A, a club for political discussion, said politics has a great role to play in market manipulation. “The hedge funds are in politicians’ pockets, influencing the decisions they make. One hedge fund, Citadel, paid U.S Secretary of Treasury, Janet Yellen, almost $300,000 to do a 15-minute speech.”

This is also true of the U.S. Securities and Exchange Commission, a federal agency responsible for combatting market manipulation, which is what hedge funds did last week. Hu said, “The current head of the SEC used to be a banker, so there is a huge amount of conflict of interest here. The reality is that people responsible for regulation are the ones who are either getting paid by hedge funds or used to be part of one.” Hu said that while platforms such as Reddit bring more accountability to Wall Street, its market manipulation will continue as before, just that risk-taking in the future will be a lot more discreet.