As COVID-19 Omicron cases surged throughout January, the many absences were made apparent by the half-empty parking lots and classrooms, prolonged substitute teachers, and eerily quiet hallways.

Whether it was exposures, positive cases, or trying to protect the vulnerable, as well as non-COVID-related absences, the number of people at school decreased dramatically. Junior Leah Andersen said, “I normally have a really large history class where every seat is filled, and when I walked into class after break, there were only five students. It was strange to see everything so empty.” Andersen continued, “I decided to stay home for a couple of days because I was exposed. I also noticed a lot of my friends were isolated during that week because of exposures or positive cases.”

However, there was a large gap between the number of positive cases and the number of absences. According to the District’s COVID-19 Dashboard, the week of 1/4-1/7 had a total number of 191 student cases at M-A. However, 799 students missed one or more days during that four-day week. With such a large margin between COVID-19 cases and absences, either a large number of students stayed home due to other reasons, or some students simply didn’t report their positive results to school. 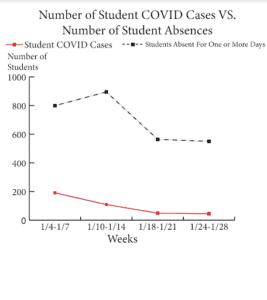 During the week of 1/10-1/14, there were 109 student cases and 895 absences. With a student population of over 2,400 students, this means that over 37% of the students missed one or more days of school that week. The week of 1/18-1/21 showed improvement in both absences and cases, as the number of student cases was only 49, and 564 students were absent. Similarly, the following week had 45 student cases, but 550 students were absent for some or all of the school days.

In response to the surge, the District supplied every student with two free at-home tests to encourage students to test and prevent more cases at school. As more students began to test themselves, the number of positive cases surged. The people who were in contact with those infected often isolated themselves, further increasing the number of students not coming to school. In addition, students feeling any symptoms of COVID-19 were encouraged to stay home. The vast difference between COVID case numbers and absences raises questions about why students were missing school.

By The Numbers COVID-19 News Top Stories No Comments