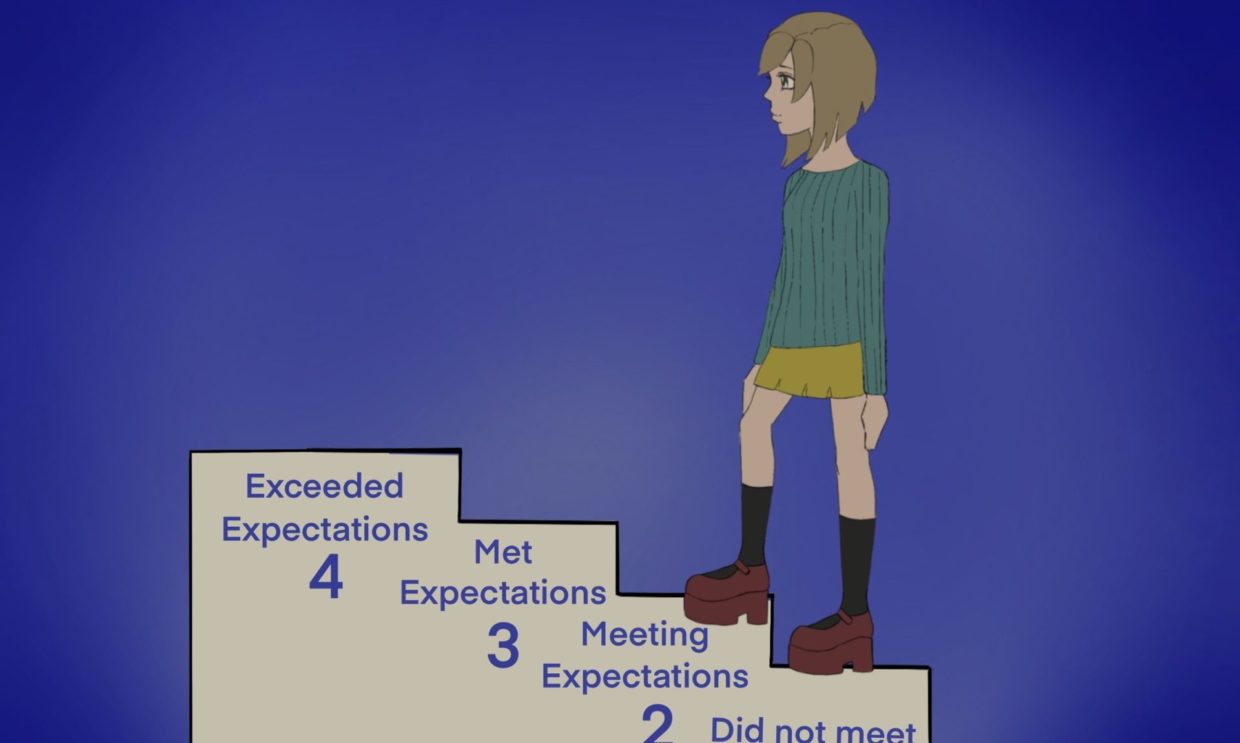 While some have reservations around a system that primarily measures assessments on a numbered scale, Standards-Based Grading (SBG) focuses on assessing students’ knowledge that ultimately translates to a more accurate approach to grading.

According to PowerSchool, “Standards-based grading (SBG) is an intentional way for teachers to track their students’ progress and achievements while focusing on helping students learn and reach their highest potential. It is based on students showing signs of mastery or understanding various lessons and skills.”

While the traditional grading system is centered around tests, homework, extra credit, and completion, SBG only measures the items that assess student knowledge.

History teacher Anne Olson said that she uses standards-based grading because the “students were getting As when I didn’t feel they necessarily did work that reflected that.” Olson added that students “figured out how to work the system and knew exactly what they needed to do to get a good grade.”

In Olson’s opinion, SBG addresses this problem. She said, “I like standards-based grading because everything is based on that four-point rubric; it takes some of the subjectivity out of grading.”

Rather than completing an assignment for completion and to avoid a zero in the gradebook, the four-point system encourages students to do higher-quality work. Because SBG is centered around assessing a student’s understanding of particular standards, it pushes students to improve their skills and the quality of their work. Olson said, “Everything is driven by those standards. And because of that, I feel like it actually pushes students to do higher-quality work than what I have seen sometimes before.”

One student said that SBG “eliminates some of the stigma surrounding feeling not enough when receiving less than an A in a class. With standards-based grading, at least in my experience, it’s more about the learning versus the score, and getting a three which is standard, feels much better than receiving a C on a project.”

Another student explained that SBG can be stressful because “my grade is solely based on assessments which are usually the hardest part of class.” While students have the ability to revise and improve assessments under SBG standards, a student said, “the fact that the most recent standard assessed is worth more makes grades fluctuate more, which can be more stressful.” This decaying average is what many students find frustrating. In turn, the system aims to measure growth of a standard by giving each score a higher weight than the previous.

Despite the temporary stress to improve the most recent assessments, Olson claims that SBG promotes a fair environment. Olson said that it “adds fidelity to the standards, takes some of the subjectivity out of teaching, and also produces a lot of equity in the classroom, because not everybody has the same resources outside of school. And not everybody goes to school with the same expectations or even just the same levels of support.”

Because letter grades have not been subject to change for decades, French teacher Florence Tubiana said, “I think it’s a culture, I think there is a moment of adaptation. I like the idea that you don’t reward everything that you do daily because that’s the only reason you want to do it.”

Tubiana also said that when she asked her students about her class, “they actually appreciate homework, which is really ironic because you would think students don’t like homework, but I think that’s the problem, I think it’s going to take a while for the culture to be ingrained.”

Olson concluded that the system is designed to “embrace mistakes and to fail forward because you can revise all of your work for full credit. It is not about perfection. It’s about just demonstrating that you learn that skill.”