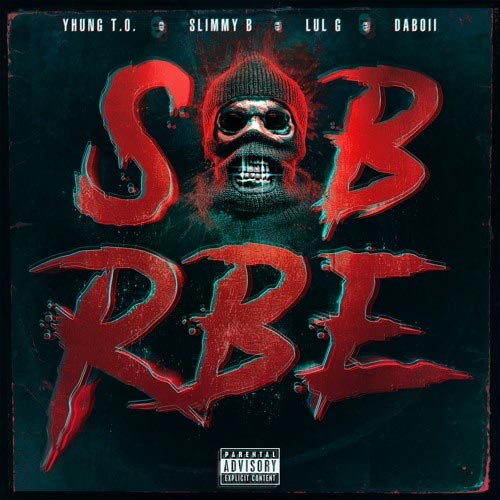 SOB x RBE’s sophomore album “GANGIN” plays to its strengths while building on previous success. The four-person group has been gaining steam ever since releasing the self-titled “SOB x RBE” debut album and providing a standout feature alongside Kendrick Lamar on the recent Black Panther album. On this outing, the group remains rooted in their element, mostly sticking to a few common themes: bands of cash, sparkling jewelry, gang wars, drugs, violence, and women. However, beyond the surface value of these rather abrasive topics, lies a fun, energetic, reflective, and melodic set of tracks.

The group is from Vallejo, California and is proud of it. Their remarkable energy and aggressive attitude are distinctly youthful as they represent the Bay Area to its fullest. The group is confident and shameless. Each song is simple and to the point, and the group does not hesitate to let people know how they feel.

The first song on the album “Carpoolin’” is a perfect example of the group’s raw, untapped potential. Different group members fly in and out delivering non-stop verses with no need for a hook on top of a fast-paced, banging beat. The song jumps around so much with an endless energy it sounds like a well-curated freestyle.

On the next song “On me,” the group invites trouble, mocking “yall don’t really want beef.” Their message is ruthless and artfully arrogant, perhaps encompassing the group’s outfit: with a chip on the shoulder and a gun in hand.

“Anti Social” is among the album’s most melodic tracks. Its a hit in the making. The group reminds listeners that they are a tightly closed circle. Yhung T.O.’s attitude is clear as he raps “I don’t wanna be yo man/ I don’t f**k with ni**as/ I don’t wanna shake yo hand.”

“Lifestyle” changes up the pace with a more introversive focus. On the hook, Yhung T.O. reminisces about his life before the fame, and how it all changed so drastically. In true SOB x RBE form there is still no shortage of braggadocios reminders that they group is self-made, making millions, and ready to shoot at any time.

The song “Can’t” similarly flaunts the group’s careless and “brazy” lifestyle. Slimmy B brags, “I be really gettin’ money you ni**as can’t (nope)/Actin’ like y’all in the field, you ni**as ain’t (where?).” The group reminds audiences that they are doing what others “can’t”. They are distinctly aware of their refreshingly genuine message and ‘ride or die’ attitude.

“Back to Back” is directly reflective of the album’s title; “GANGIN” is exactly what the group is doing on this track. The beat is heavy with bass but otherwise rather mellow, and the Slimmy B and Yhung T.O. trade verses “back to back.” Yhung T.O.’s showcases his silky melody as he skates over the beat, while Slimmy B’s sharper vocals shred through. On this song, whether they are “in the party, sticked up, gang-gangin’” or “thuggin’ in the field” the group clarifies that they really live the gang lifestyle that they rap about.

“Always” is an ode to brotherhood. The group is clearly loyal to one another and their lifestyle to the day they die. Yhung T.O. raps, “I never leave my brothers, I never hold out/ Always be thug, ni**a never go south.” For such a gritty message, the song is quite melodic. The slower, softer flow provides a nice change of pace.

“Paid in Full” is DaBoii’s moment to shine. His bars start fast and don’t slow down. He talks about his journey from failing out of school to making it big and then seeing all the fake ones around him flock to his side. He knows that he really is that one with the big chop, the diamonds, and the crew of real gang members.

The album’s tone changes with the song “God” in which Slimmy B reflects on his motivations: his group members, his mom, and his son. This more reflective focus continues onto songs like “List” and “Once Upon a Time.” They talk about the struggle and patience it took to get to where they are, and the integrity they need to sustain in order to remain true to themselves. These songs show the growth that the group has seen as they clearly possess the ability to contemplate more complex issues than “reppin’ the gang” in the streets and living the lavish rap lifestyle.

The album show SOB x RBE’s growth and expansion to new topics and styles as seen on “God” and “Once Upon a Time”, whiling retaining the ability put down, hard, cutthroat bangers like “Carpoolin” and “Can’t.” The group’s potential is high and still growing. The horizon is nothing but bright for this youthful and energized Bay Area crew.