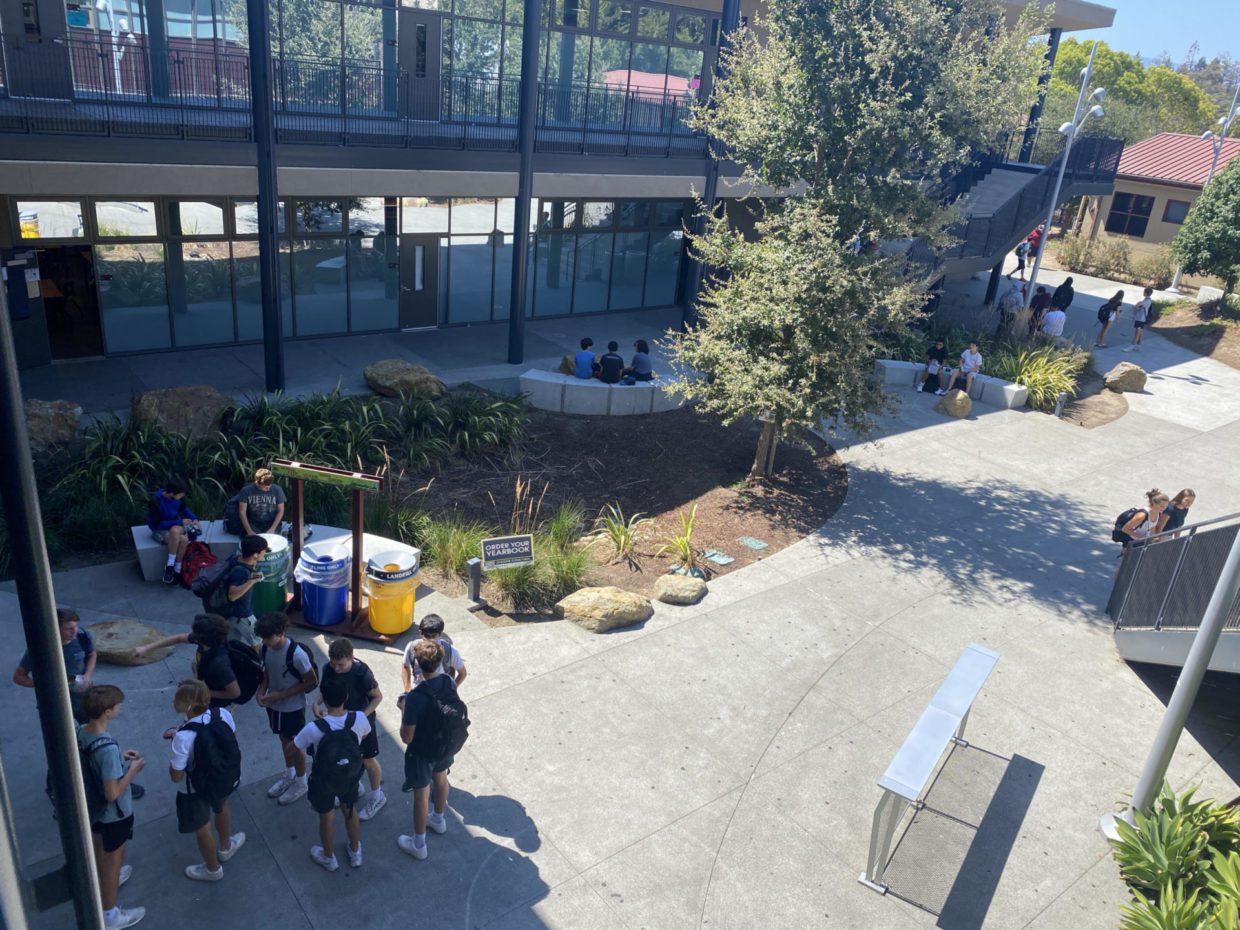 On Tuesday afternoon, as temperatures soared above 100 degrees, students flocked to the shade or ate lunch in air-conditioned classrooms, abandoning typically popular—and sunny—lunch spots on the Green or across the G-wing.

The majority of M-A classrooms don’t have air conditioning, frustrating students and teachers alike in this week’s record-breaking heat wave. Jessica Sacksteder, who teaches without air conditioning in the D-wing, said, “most days, it’s pretty miserable late in the day. Even before the heat wave, it’s 80 degrees in here by sixth period. Today [Tuesday] though, it already hit 83 by 10:30am.”

Jason Knowles, who teaches in the B-Wing, said, “it’s very uncomfortable, both physically and mentally. I’ve got two portable fans here and they do nothing to cool the room at all.” On Tuesday, the high in Atherton was 106 degrees outside, but as Knowles added, “When you add 25 to 35 students in here, the temperature increases exponentially. It lowers your ability to concentrate.”

Freshman Teddy Dacey said, “It’s difficult to work in the heat. I’ll just be zoning out. Sometimes I sweat so much I pass out in class, and go to sleep.”

Some teachers agreed that the heat made it noticeably more difficult for students to focus. Sacksteder said, “I don’t think my students are fully with it when it’s this hot,” and Nancy Day, a teacher from the E-wing, said, “In the heat, it’s very difficult to do any critical thinking or any kind of task that would require too much effort. I’m actually moving my classes to the F-wing where there’s some air conditioning for my sixth and seventh period.”

As the school rushed to respond to the heat, some teachers, like Day, moved to different rooms to try to escape the heat. Pres Benbow, a teacher from the D-wing, said, “the school brought some ice water for the teachers during fourth period, and then there were some options to potentially change classrooms to air conditioned units in the afternoon, if the teachers in those air conditioned units had a prep period.” While moving classrooms was an option, teachers had to make arrangements with their colleagues themselves, and the lack of available rooms meant that not all classes could do so.

Sacksteder said, “I did finally get an email late last night [on Monday] saying I could contact other teachers to teach in their room, but only for fifth, sixth, and seventh periods. So for sixth and seventh period, I’m going to hold class in a different room, which is nice, but not super convenient.”

Many teachers in rooms without AC used portable fans to help beat the heat, but with triple digit temperatures outside, many felt the fans were insufficient. Junior Kamarah Flood said, “in my math class, we still use the fan that our old teacher had before she retired. She’d been working here for 20 years and that’s the same exact fan. That fan is on its last life, and it’s been terrible in classrooms without AC all day.”

On the opposite side of campus from the B-, C-, D-, and E- wing classrooms without AC, students crowded by the gyms—also not air conditioned—for a slow day in P.E. Teacher Amanda Bianchi said, “We didn’t do anything physically exerting today at all. When we’re hot in P.E., we don’t do much because of safety concerns. We’re slowing it down, and we’re trying to hide indoors.”

Similarly, some sports practices, such as dance and tennis, have been canceled this week to keep student athletes out of the heat. Freshman Mia Sanchez still met with her cross country team, but they didn’t practice or run on Tuesday, which Sanchez said she was “glad” for. She added, “in classes, it was hot and sweaty. I wasn’t paying attention, and I even went to the bathroom twice just so it wouldn’t be hot.”

Atherton still has highs forecasted above 90 degrees for Wednesday and Thursday, with Friday close behind at a predicted 88. To the relief of teachers and students, next week is expected to cool off with temperatures in the 70s.