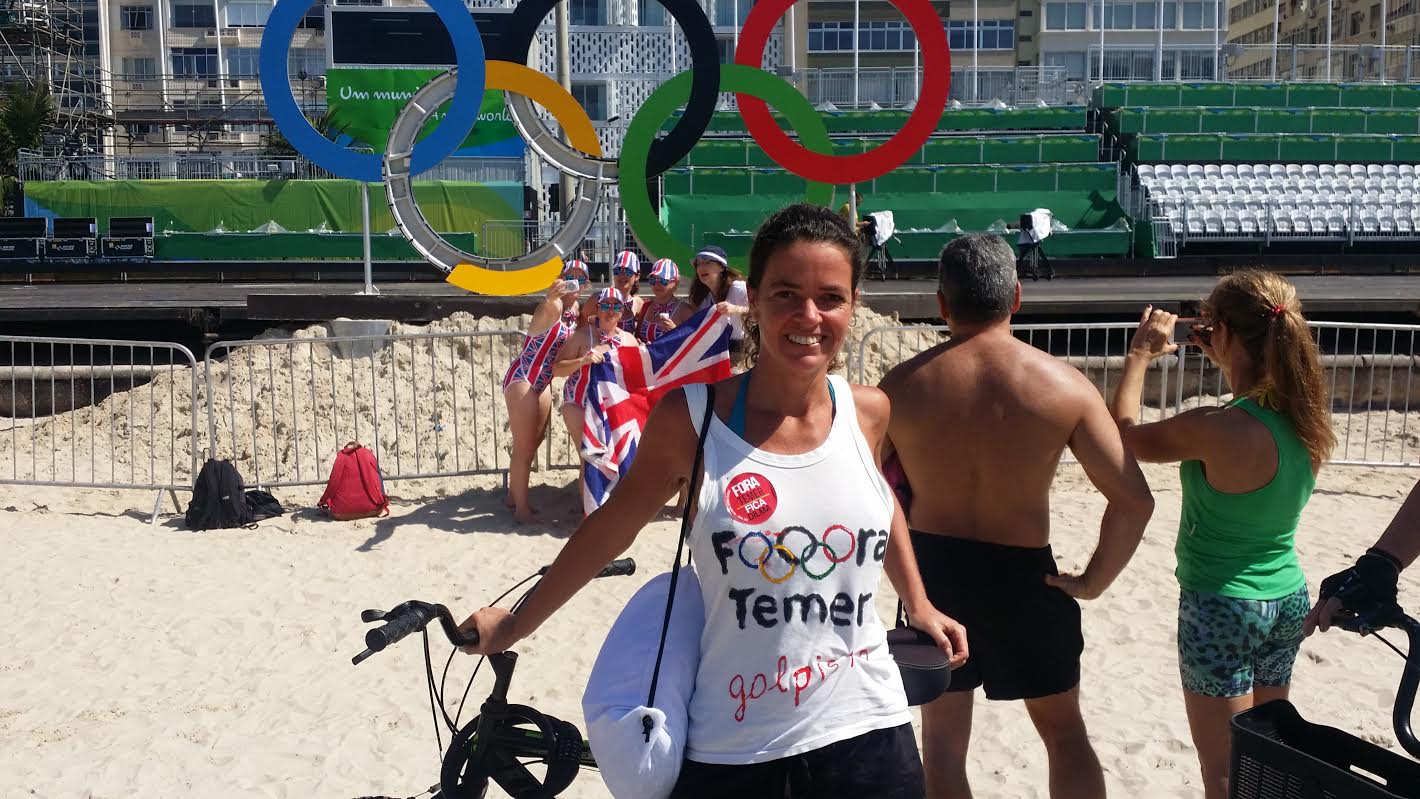 Copacabana: Michel Temer is the current interim president of Brazil. The woman in the photo has an Olympic- themed shirt that says ‘Fora Temer golpista’ which means ‘Out with coup leader Temer.’ In addition, she is wearing a red sticker that says ‘Fora Temer / Fica Dilma’, which means, ‘Out with Temer/ We want Dilma back’. (‘We want Dilma back’ is a loose translation, ‘Fica Dilma’ literally translates to ‘Remain Dilma’).

Photos and translations by Mara Cavallaro

The 2016 Rio Olympic games recently concluded with a glorious closing ceremony and the extinguishing of the Olympic flame on August 21. While the attention of the world centered on the competitive glory of the games, tens of thousands of Brazilians were forced from their homes and the residents of Rio and Brazil will be burdened with a debt that may reach 10 billion dollars. At the same time, Brazil is immersed in an ongoing political crisis marked by the possible impeachment of the president Dilma Rousseff and a massive corruption scheme that ensnared some three hundred members of Congress and business leaders.

Over the past decade, Brazil, particularly Rio de Janiero, has been a popular location for major athletic competitions: the Pan American Games in 2007, the Fédération Internationale de Football Association (FIFA) Confederations Cup in 2013, FIFA World Cup in 2014, and the Olympics in 2016. To host these events, the Brazilian government initiated many new infrastructure projects to beautify the city for the incoming media. In a city that is already packed with people and buildings, those undertakings came at the expense of Brazil’s poorest citizens. 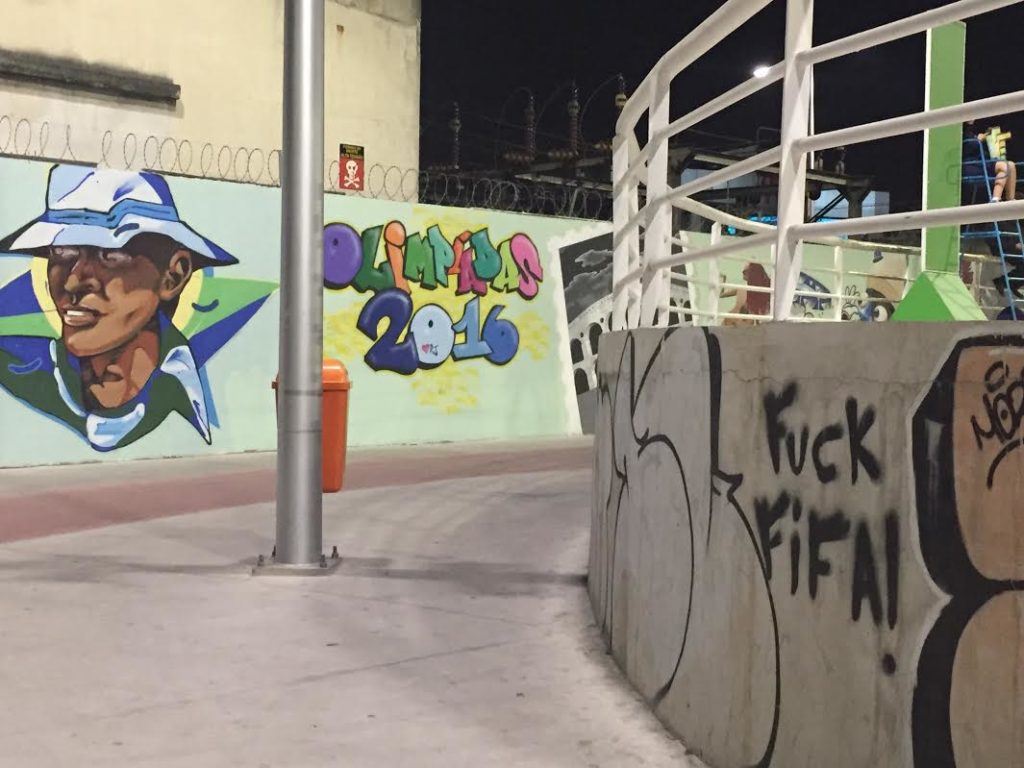 Walls outside Engenho de Dentro, the Olympic Stadium for track and field. The sentiment animating the graffiti about FIFA (who oversaw the 2014 World Cup) is widely held about the Olympic organizers as well.

While media coverage of the Olympics and other sporting events focused on the majesty of Rio, with stunning aerial views of the stadiums, surrounding natural beauty and time lapses of the beach and gentrified coastline, the government hid the favelas (slums) that make up and house a majority of the Carioca, or native, population.

In preparation for the Games, Rio authorities erected a wall along the highway from the airport to the south of Rio, hiding one of Brazil’s largest shantytowns, Maré. 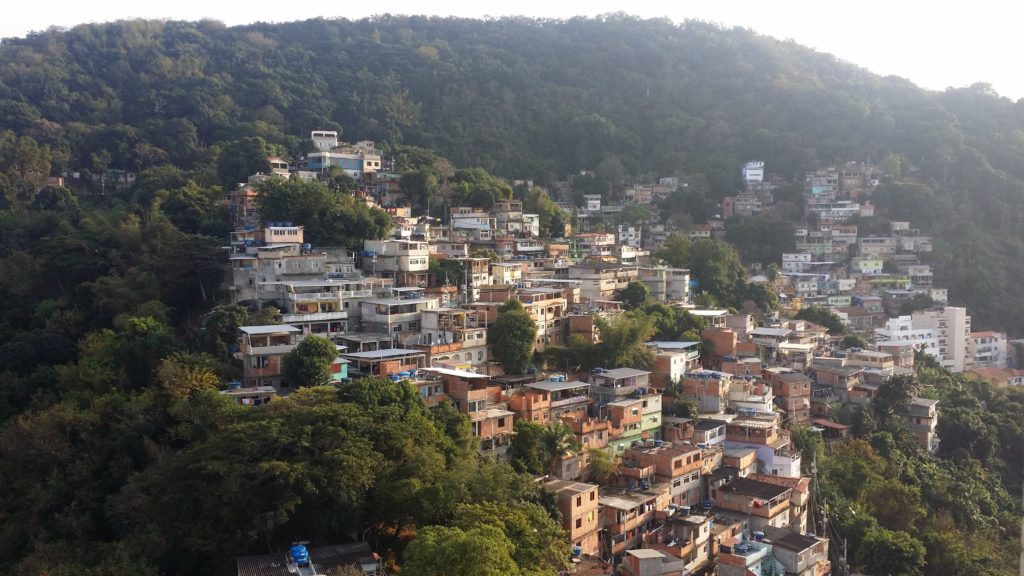 At the same time, the government took every opportunity to showcase its innovation and modernity. One section of the wall even changes from solid concrete to transparent glass in order to display a newly built school on the side of the highway. This attempt by Brazilian leaders to create a facade over the indigent communities on the outskirts of Rio appeared prominently throughout the Olympics.

Notably, on the last day of the games, during the Olympic marathon, the course ran past the newly constructed Museu do Amanhã (Museum of Tomorrow), specifically built for the games, although not a sporting facility. 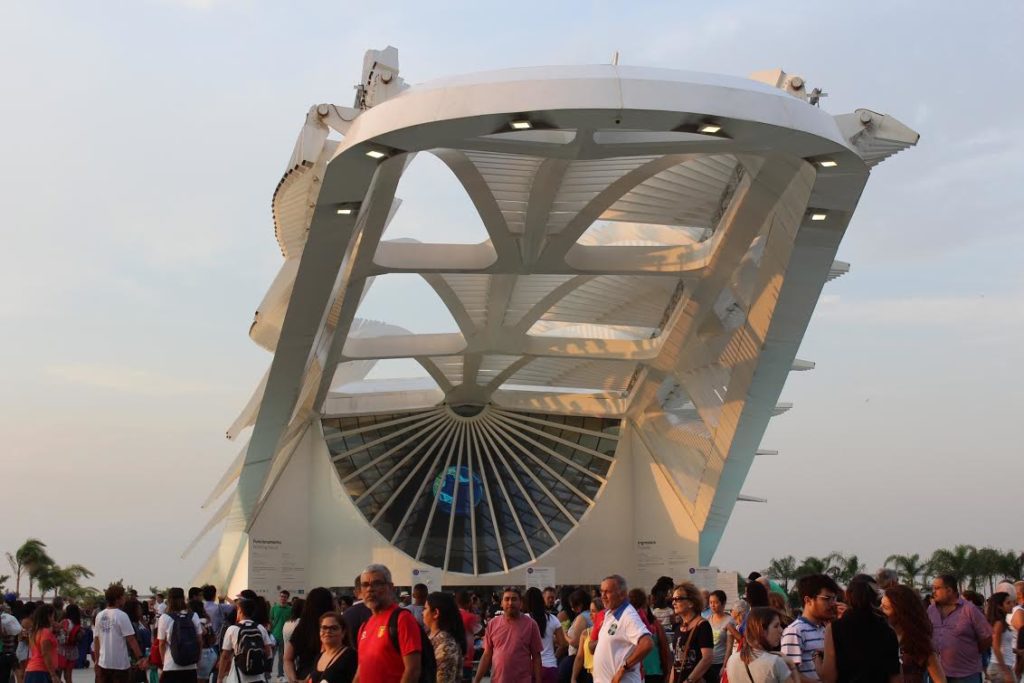 Museu do Amanhã (Museum of Tomorrow) in downtown Rio, constructed for the games.

Such uneven distribution of wealth and resources has not gone unnoticed by Rio’s urban poor and human rights activists. Sandra Carvalho, executive director of Justiça Global (Global Justice), a non-governmental organization advocating the defense of human rights, explained the countless transgressions inflicted upon inhabitants of the favelas as well as the consequent anger and resentment toward the Brazilian administration. 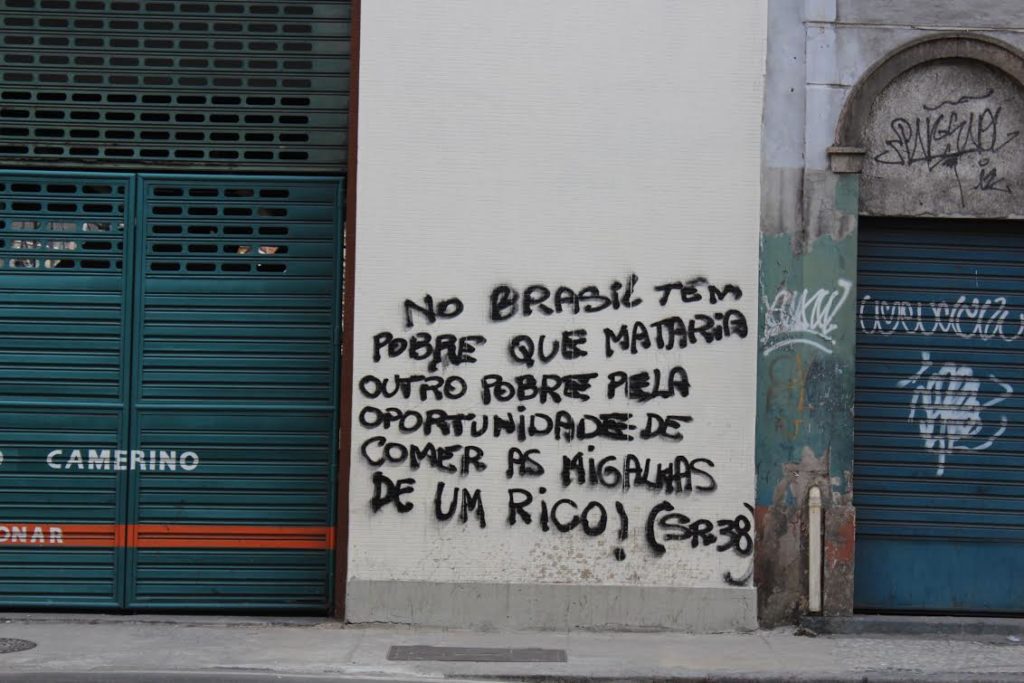 Grafitti in downtown Rio: “In Brazil there are poor that would kill other poor for the opportunity to eat the crumbs of the rich! (SR. 38)”

Carvalho’s words uncover the true tragedy behind the hosting of international competitions: not only are the poor of Rio de Janiero given no aid or even acknowledgement by the Brazilian government, but the government also strips them of what little they have in order to cover up its glaring deficiencies from international media.

Unfortunately, Interim President Michel Temer and his associates have done a comprehensive job to keep media attention away from the ignored and impoverished and toward the wealthy and spectacular. This cover-up job has resulted in what Carvalho describes as “problems that are almost invisible.” One of the greater problems she explained was higenização, the collection of people living on the streets to give the city a clean image.

Of this issue Carvalho said, “The State not only collected those who lived on streets but also changed the public transportation itinerary to make it more difficult for people who live in the outskirts of the city to come to both the downtown area and the south of the city (zona sul). Not too long ago, afro- Brazilian men were arrested for the ‘crime’ of riding on buses to the zona sul while black, poor, and wearing flip-flops.”

Still worse than the government’s active neglect of the favelas is a factor of racism that plays even more into the persecution of some of the shantytown people. 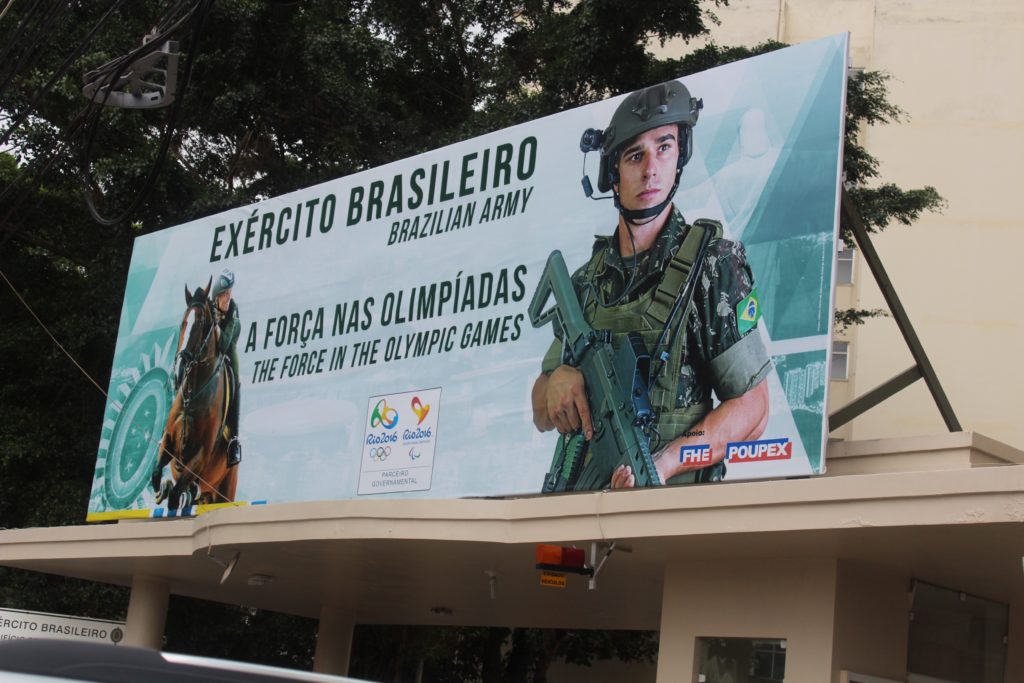 Billboard in Urca, Rio de Janeiro advertises the Brazilian army as ‘the force in the Olympic games.’ 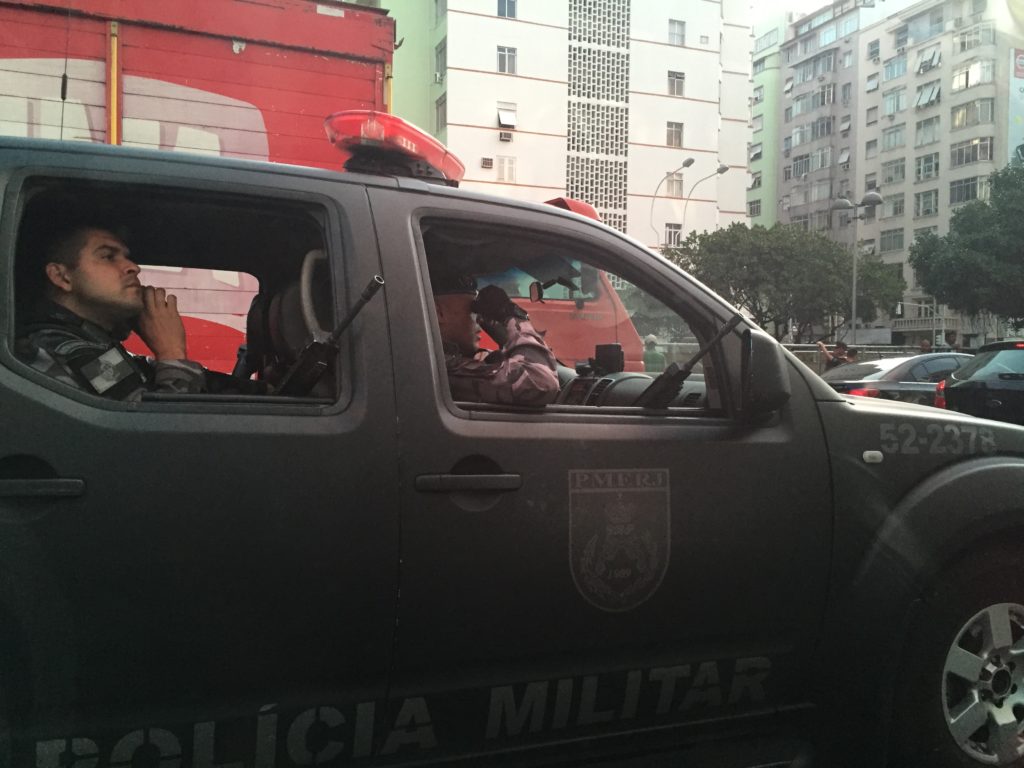 An example of the militarization of public security: Polícia Militar (Military police) commonly drive through Rio with heavy weaponry pointed out of the windows.

Carvalho summed up the majority views on the dispatch of troops to the favelas: “Human rights defenders have also documented other impacts of these events [higenização], including the militarization of public security. By militarization, I mean the use of the army in day-to-day urban control. Militarization is generating abuse, including murder, as well as applying military code and justice to civilians. This is an even greater problem in the favelas, which have an even stronger presence of military personnel carrying heavy weapons.”

By focusing on concealing and subduing the urban poor, Temer’s administration loses valuable time that it could be using to fix other problems plaguing Rio and the rest of the country, the most concerning being Brazil’s clean water supply. 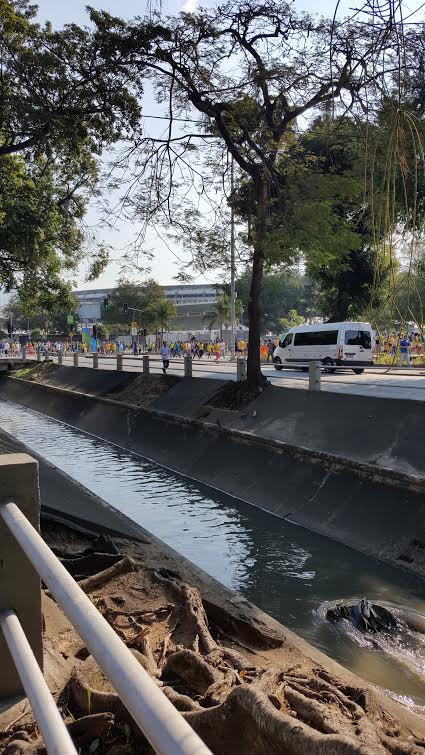 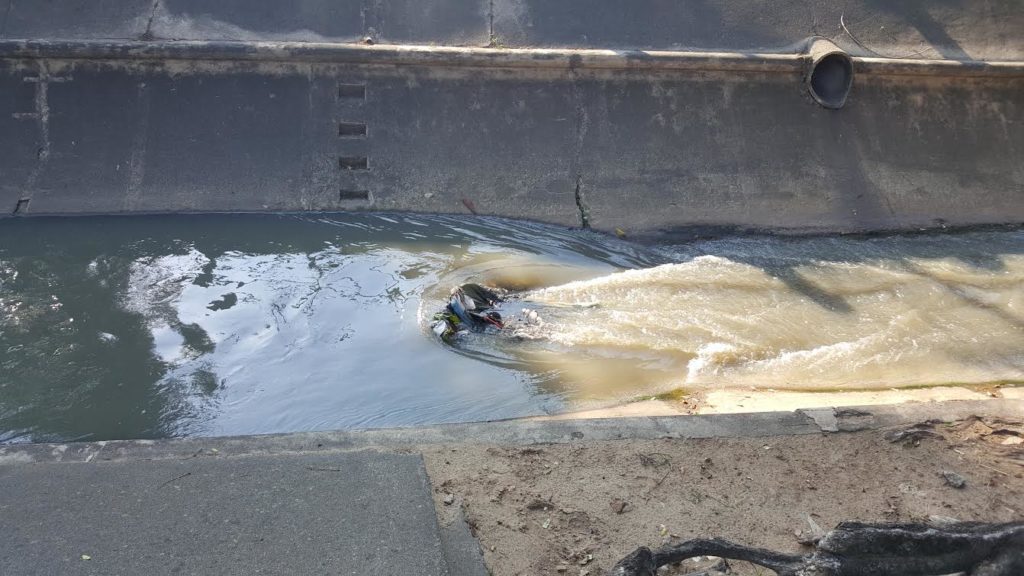 Untreated wastewater runs by Maracanã stadium. The first photo shows the ditch, as well as fans and the stadium in the background, while the second is a close-up.

As far as the middle class view of the juxtaposition between affluence and destitution, people see these sporting events, like the Olympics, as a wasted opportunity to remedy this stark contrast. Andrea Veloso, a former elementary school teacher for children with special needs, said, “Every kid that sees an athlete winning, especially from their country, is encouraged to practice sports, to get off the streets. Brazil is still a very violent country, and it still can’t seem to value its children, so sports and art are some of the forms that we have to work with these kids to integrate them into society and change their mindset so that they have the opportunity to learn a profession, get a job.” 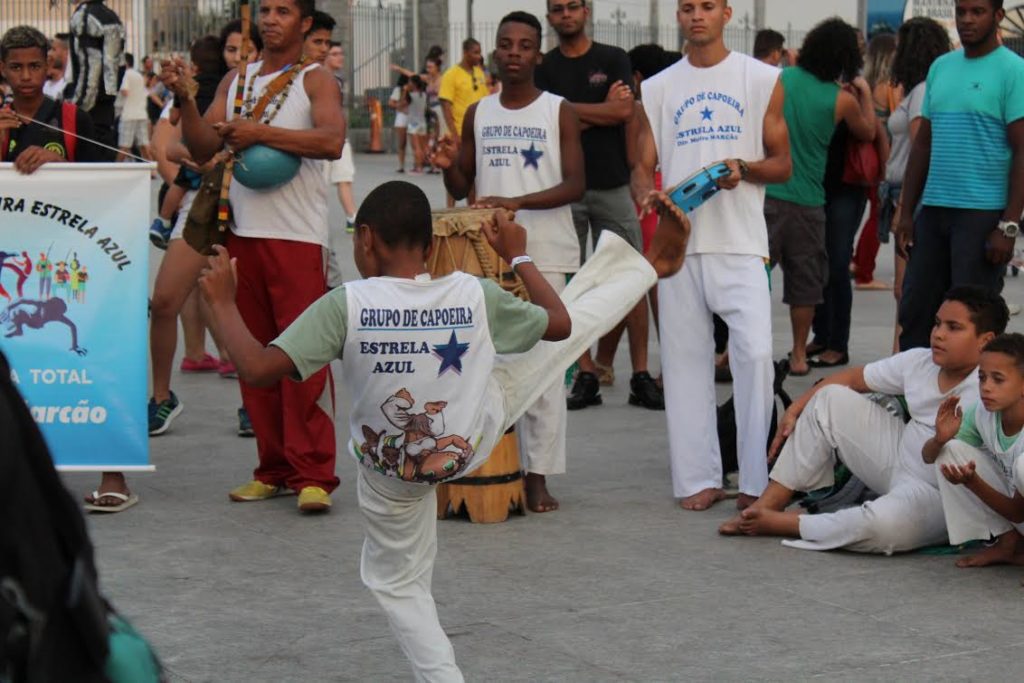 Capoeira student shows off his moves near the new Olympic Boulevard in downtown Rio. 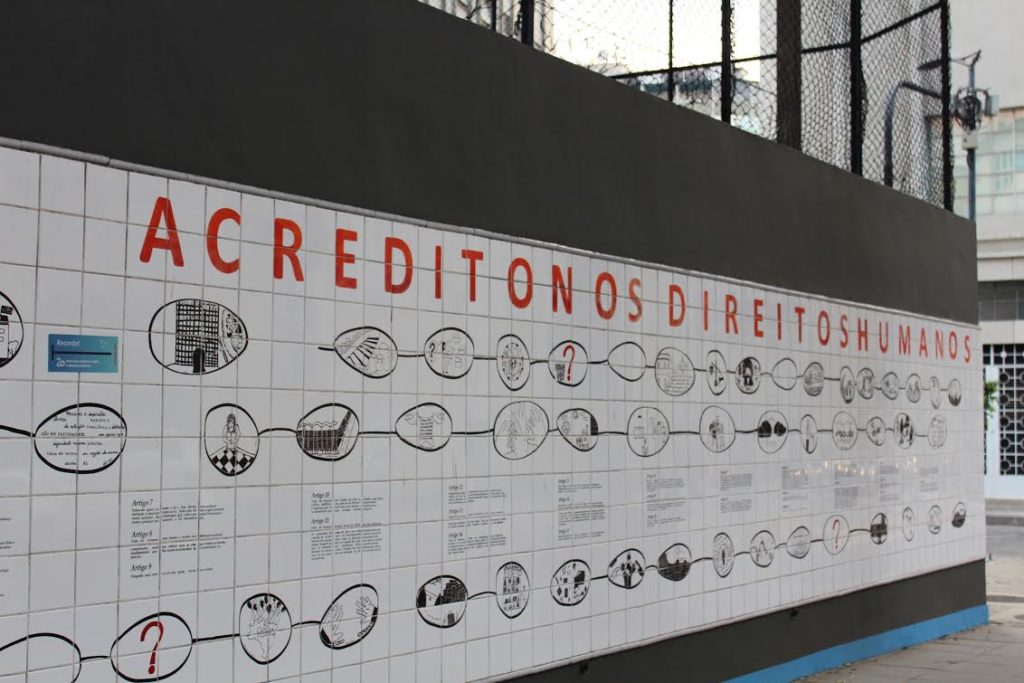 Artwork on the side of an elementary school in downtown Rio: “I believe in human rights.”

She continued, “The Olympic Committee should have given the extra tickets to schools, to kids, to stimulate them, and allow them to have the opportunity to get to know the stories of the athletes who did not have many resources and were able to win. Seeing an athlete win at their event is the biggest stimulus for those who are beginning their lives—kids.”

At the same time, Veloso admitted, “I don’t know if today, in the reality that Brazil is living in terms of politics, is the best moment for us to host the games because we are suffering an economic crisis, with a lack of hospitals and schools. If we had taken the money that was invested in the construction of all these stadiums and spent it on public services, we would be able to considerably improve this reality of school, transportation, and violence.”

While Brazil’s problems seem applicable only to Rio’s large city environment, we can learn from the mismanagement of resources and neglect of poorer communities. To a lesser degree, M-A has a similar problem with under-resourced people within the student body. Uneven wealth distribution is a universal problem that has manifested itself conspicuously in Rio since the turn of the century. For the  M-A, making sure that resources are properly used to address the opportunity gap is vital in order to avoid similar problems in our own community.