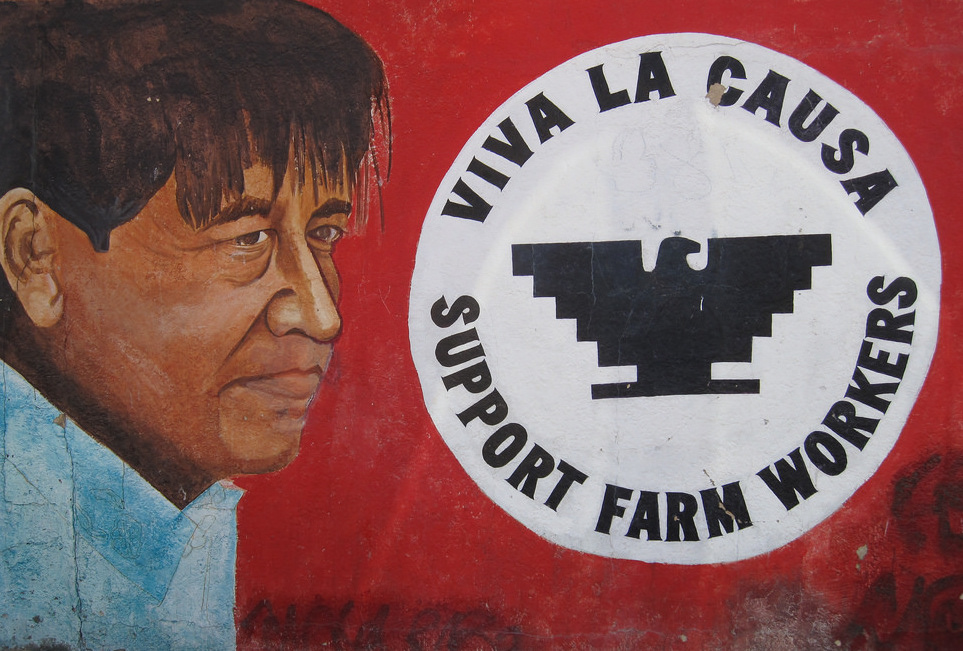 Remembering the Legacy of César Chávez

César Chávez has shaped today’s society through his struggle for providing rights for farm laborers, his advocacy for and exceptional use of nonviolent civil disobedience, and his endless fight for the recognition of Hispanic Americans’ dignity.

Chávez, who was born in 1927 and passed away in 1993, is known for co-founding the United Farm Workers of America, or more commonly referred to as the United Farm Workers (UFW), with Dolores Huerta. Through the organization, Chávez improved the lives of millions of Hispanic American laborers and farm workers in the United States through peaceful protests, boycotts, demonstrations, strikes, and fasts. In 1994, President Clinton honored Chávez posthumously with the highest civilian award, Medal of Freedom. Today, we celebrate César Chávez Day on his birthday, March 31 to commemorate his accomplishments and legacy.

In the United States, César Chávez Day is considered a commemorative proclamation holiday. Despite not being a federal holiday, several states celebrate Chávez’s legacy on American society today. For example, the states of Arizona, California, Michigan, New Mexico, Utah, and Wisconsin proclaimed César Chávez Day a formal holiday. Additionally, Colorado and Texas declared March 31 an optional holiday while the states of Nebraska and Nevada consider it a festival day. However, our entire country needs to recognize the great accomplishments of Chávez, including granting farm workers basic labor rights, establishing dignity and respect for these farmers, and expanding opportunities for workers.

Starting in 1952, Chávez was a member of the Hispanic civil rights group called the Community Service Organization, and eventually, he became the national director. However, he resigned in 1962 just ten years later as the CSO refused to fund his proposed farmworkers union. As a result, Chávez spent his life savings to create the National Farm Workers Association (NFWA) alongside Huerta, who also advocated for improved labor rights through peaceful civil disobedience. The NFWA later merged with the Agricultural Workers Organizing Committee (AWOC) in 1966 to form the United Farm Workers of America, which remains in existence today.

After the formation of the NFWA, Chávez’s brother created the group’s symbol of an Aztec eagle with the distinct feature of rigid, squared off wings; the purpose of the unique design was to make the symbol easier for union members to draw on their own flags and posters. When protesting, marchers would carry a sign with the black Aztec eagle on a red background. Largely written on these posters were the bold words “HUELGA” (strike), or “VIVA LA CAUSA” (long live the cause).

A symbol is an important thing. That is why we chose an Aztec eagle. It gives pride… When people see it they know it means dignity. -César Chávez

La Causa, which “was supported by organized labor, religious groups, minorities, and students,” was essentially the continual fight for liberties and basic rights in the labor force. Through demonstrations, Chávez and the union fought for La Causa by seeking “recognition of the importance and dignity of all farm workers” as stated by the UFW’s official web page. Moreover, the source states, “The marchers wanted the state government to pass laws which would permit farm workers to organize into a union and allow collective bargaining agreements.”

The UFW accomplished many of its goals through strikes, however, the group is most well known for their protests involving grapes. From 1965 to 1970, the UFW promoted strikes against grape growers and boycotts on table grapes while also traveling across the States to spread their message with the American population. This tactic was a huge success for the organization and lead to millions supporting the boycott. Ultimately, the UFW was victorious. Generally, big farm corporations could easily end strikes through violence. This historic victory allowed for the union to secure broader rights including improved wages and collective bargaining, the negotiation of labor conditions.

The UFW additionally boycotted lettuce during the early 1970s. Other instances where the group maintained their firm stance on nonviolent civil disobedience were through marches and demonstrations. In 1966, the UFW organized a 340-mile march from Delano to Sacramento in California in order to promote La Causa. 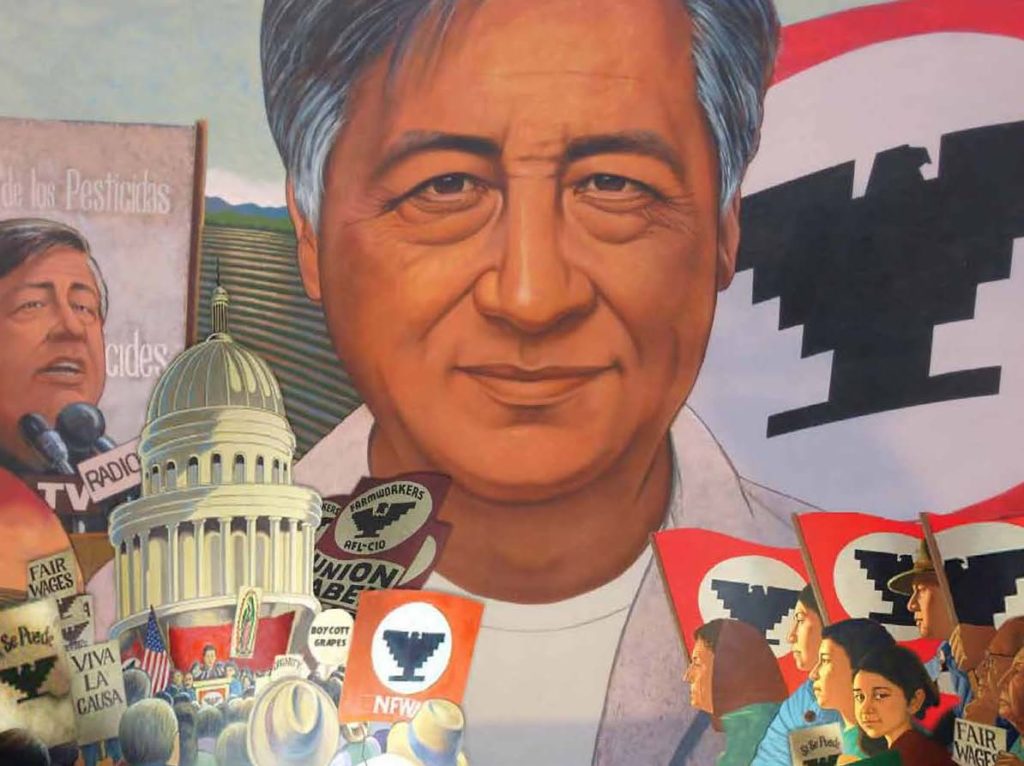 César Chávez alongside Americans who are proudly holding up the symbol of the Aztec eagle and are rallied to support La Causa.

During the 31 years Chávez served the United Farm Workers of America, the organization experienced momentous victories. For example, the group created “the first union contracts requiring rest periods, toilets in the fields, clean drinking water, hand washing facilities, banning discrimination in employment and sexual harassment of women workers, requiring protective clothing against pesticide exposure” and more. The UFA has also extended “state coverage under unemployment insurance, disability and workers’ compensation, as well as federal amnesty rights for immigrants.” Moreover, we have seen the establishment of medical benefits for farm workers and their families, “the first and only functioning pension plan for retired farm workers” known as the Juan de la Cruz Pension Plan and the first union contracts which subsidize profit sharing and parental leave. Another key historic moment for the UFA was the passage of the Agricultural Labor Relations Act in the state of California in 1975. The Act declared protection for the rights of all farmworkers to establish unions and negotiate better working conditions.

These major accomplishments of the UWA were made possible by Chávez’s devotion to La Causa and his struggle to achieve basic rights for farm workers. Through these successes, America has promoted dignity amongst all individuals and formed a deep respect for the efforts of millions of farm workers and laborers today.

In addition to shaping the lives of millions living in our country today, César Chávez has had a lasting impact on M-A students. Senior Jessica Chavez-Navarro, co-president of Latinos Unidos de M-A (LUMA), reflected on Chávez’s influence in her life as a Latino American student and shared her perspective on the importance of Chávez’s work.

Chavez-Navarro recounted her first memory of César Chávez. She stated, “I first learned about César Chávez through my father. He would always kid around about César Chávez being our relative since my last name is Chavez.” Ever since, she has developed a passionate respect for Chávez accomplishments. When considering Chávez’s impact on her own life, Chavez-Navarro explained, “César Chávez is a great inspiration and model for me. It is empowering to know how an ordinary man made such a huge difference in the United States by standing up for his [race].” 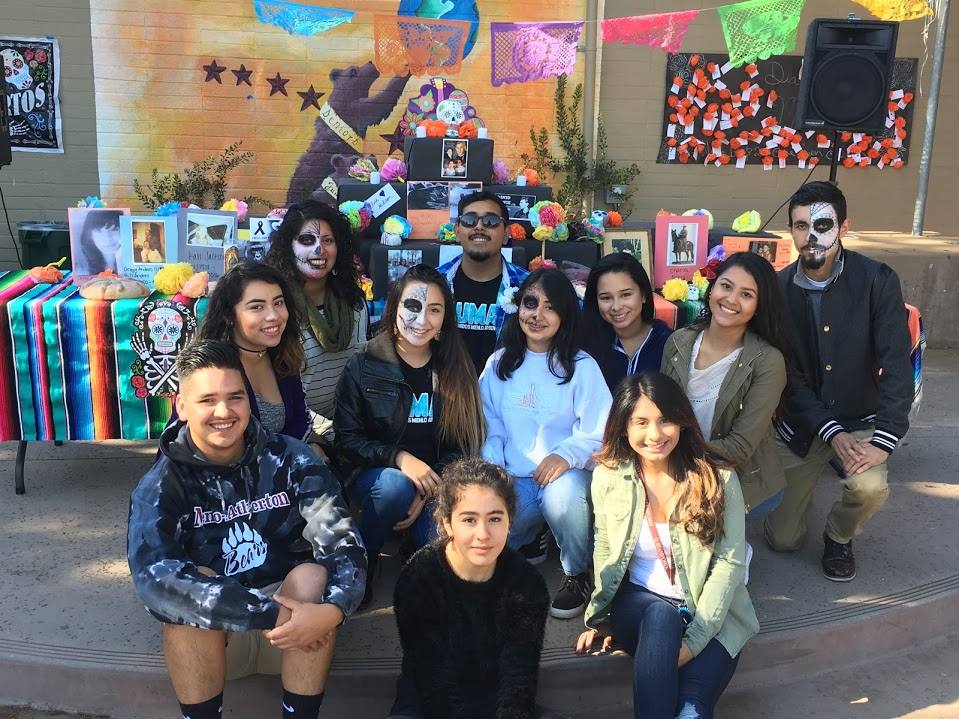 Chavez-Navarro explained the significance of César Chávez Day to her: “César Chávez Day for me is a reminder of how we can all be leaders. He has made a pathway for us Latinos to walk through. He has been written into our history to remind us how passion, sacrifice, and dedication can make a difference and an impact. He will never be forgotten, and it’s amazing how we have a day that specifically celebrates and recognizes a Latino Leader.”

While LUMA will not be hosting an event specifically celebrating César Chávez Day this year, be sure to look for their exhibit on the Green this Thursday, March 30 during International Week. The team will be presenting “different types of dances including folklórico, salsa [and] bachata” in addition to “displaying boards with information about each region of Latino countries.”

When celebrating César Chávez Day, we commemorate Chávez’s achievement of improved rights for the millions of farm laborers using bold yet peaceful methods during the 1900s, and in addition, we acknowledge his lasting impact in American society today.