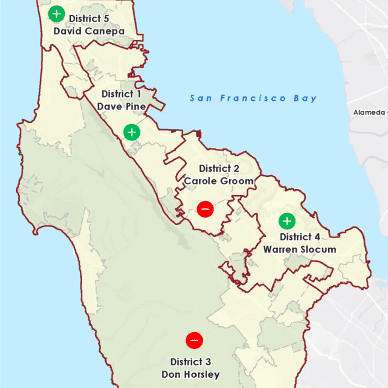 Redistricting distributes the population among districts in a county to ensure that all communities have equal access to political representation. Every ten years, the Board of Supervisors is in charge of this alteration and is legally required to make sure that all districts are relatively equally populated.

In San Mateo County, the Board of Supervisors decided they would appoint an Advisory Commission to handle the matter. The Sequoia Union High School District includes Atherton, Belmont, East Palo Alto, Ladera, San Carlos, Menlo Park, Portola Valley, Redwood City, and Woodside, meaning M-A families are heavily dispersed throughout different districts, and there is the possibility that students could be in danger of being excluded from a district or shifted into another.

Parks introduced that the process starts by collecting census information, which gives the committee insight into which districts have a positive or negative deviation of population from the ten years prior. The committee will then decide where to allocate the surplus from some districts into other districts that have a population deficit. Parks said, “​​District 1, 4 & 5 are in a negative deviation, while District 2 & 3 has an excess of population.” 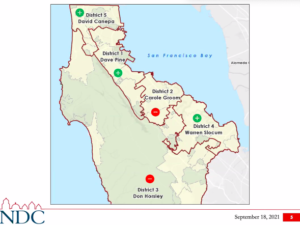 The map shows which districts have a less than ideal population with minus signs, and which have a surplus population with plus signs. The map also indicates the names of each supervisor in the district that they supervise. 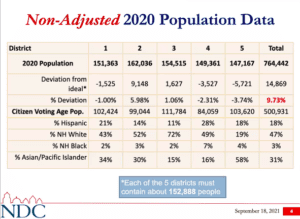 2020’s population data by citizen voting age and race, and specifies the deviations from an “ideal population” in the five San Mateo County districts.

The catch is that the census results were released months later than expected, putting the committee in more of a time crunch than expected. Parks said, “We expected the data back in May, but we only received the data as of August 12th, 2021.”

Hermes Monzon, a chairperson from South San Francisco City, suggested that “these tools still make it hard to participate at a local level,” as he voiced that communities like his own should host workshops to create new lines, on pieces of paper in collaboration for a more “equitable approach.”

Furthermore, the maps and planning must also adhere to the legal criteria of federal and state law. First, according to federal requirements, the map must represent an equal population, and it must abide by the Federal Voting Rights Act. Secondly, the map must meet California requirements including the accounting of geographical continuity, the minimization of dividing up neighborhoods and cities, and easy identifiability, meaning inclusive of natural boundaries. Committee members also cannot favor or discriminate on the bias of political parties, as they must not look at political party data.

Finally, after all the factors are accounted for, a formalized version of the curated map will be submitted to the state, at the approaching deadline of December 15th.

While there are varying opinions toward the functionality of the redistricting process, it is our community’s job to get involved and do what we can collectively to make sure the redistricting is fair and appeals to the needs of San Mateo County.

For more information on the importance of redistricting visit: https://datadrivendetroit.org/blog/2020/05/14/why-is-redistricting-such-a-big-deal/

Ella Bohmann Farrell is a junior at M-A this year and in her first year of journalism. She enjoys writing about student perspectives and school activities, as well as civic issues. When she isn’t on M-A’s campus, she enjoys playing tennis, painting, and traveling. She is also the Civic Engagement Lead for the SLC, and has just recently started her own service club!