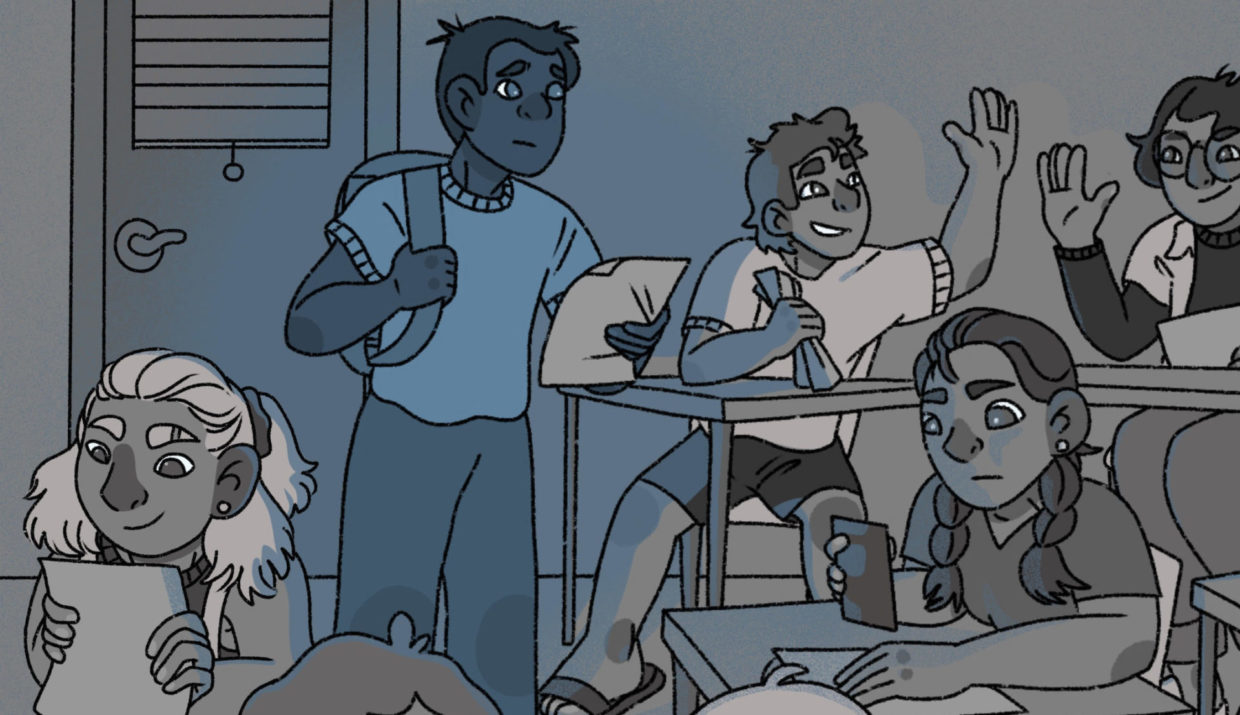 At my middle school, East Palo Alto Phoenix Academy, I felt at home since the majority of students were Latinos, like me, and were from EPA. Despite the comfort of being in a school in my neighborhood, I felt it was necessary to leave for high school in order to get a higher quality education and greater opportunities.

Starting freshman year of high school, I was excited to learn and meet new people. The differences between my classmates and I hadn’t occurred to me until the first day of school when I entered my AS English I class. As I heard my peers mention their middle schools, I felt like I was hearing a broken record player repeating “La Entrada” and “Hillview.” I automatically felt different. I was one of the only students of color in the class who came from East Palo Alto. The group of EPA peers who I could relate to only grew smaller as the year continued. This made my transition into an uncomfortable setting even more difficult as I no longer had peers to talk to before class started or friends to ask questions to. I lacked a support system in class.

At M-A, many factors made me feel like the “other” and inadequate from my peers in honors and AP classes: the differences in our communities, socioeconomic backgrounds, and academic preparation prior to high school. The inadequate feeling stemmed from comments like, “You should have learned this in middle school.” There were occasions when my peers made plans to work on essays together at Coffee Bar in Menlo Park, a collaborative system I was never introduced to. One specific instance I occasionally think about is when one of my peers called my writing “bad.”

I always felt like there was an invisible division in the room in which I did not feel comfortable talking to my peers from other communities and they did not feel comfortable talking to students from EPA. I once took this division from the two groups personally, but, looking back on it now, I believe it was natural for this division to form. It was the first time in my life that I and my few EPA peers were in a classroom setting with students from Menlo Park or Atherton, and it was our other peers’ first time being in an environment with students from EPA. We didn’t know how to interact with one another so we naturally distanced ourselves. This accumulation of differences and isolation from others ultimately led to an imposter syndrome in which I felt academically inadequate and did not feel like I belonged in honors classes because of our cultural differences.

Although I struggled with the cultural shock and doubtful thoughts that came with being a student of color in rigorous courses at M-A, I was determined to get the most out of my classes now that I finally had access to quality education. My previous school had discrepancies in resources, did not offer advanced tracks, and offered limited extracurriculars. In order to take advantage of these new opportunities, it was necessary that I overcome my battle with imposter syndrome as it was inhibiting my success.

I decided to approach this struggle by embracing my community and educating my peers about issues in EPA. I believe that a lot of the sense of feeling like the “other” stemmed from my peers not really knowing me. By helping others gain greater insight into my community, I felt like they were getting to know me. I fulfilled this by using events in EPA as examples in AP classes and in Socratic seminars.

Besides helping my peers learn more about me and my background, I felt it was necessary to prove myself academically in order for my peers to truly accept me. Performing well in my honors classes made me feel validated by my peers. Beyond feeling accepted by my peers, my motive for performing well in my honors classes came from my strong desire to represent EPA students at M-A who didn’t feel adequate enough to enroll in honors classes or felt intimidated by the thought of being a minority among affluent students. After pursuing this approach, I continued to serve as a learning tool for my peers to learn more about East Palo Alto.

The summer before junior year my internship at Facebook Academy introduced us to panelists who were people of color with leading roles at Facebook. The panelists shared their experiences with imposter syndrome in the workforce. From the panelist’s experiences, I realized that imposter syndrome will not miraculously fade away and is something I will continue to deal with despite the exposure I’ve had thus far in environments where I feel out of place.

Growing aware of the long-term struggle I will have with imposter syndrome helped me understand that I can’t wait until I’m comfortable enough to be involved on campus because it would take longer. I became involved at M-A by speaking at faculty and school events, being a student representative on district and school-based committees, participating in a musical production, and being President of the AVID Club. I intend to continue embracing my background and community, even in environments where those factors make me different from others.

Although the transition to M-A was difficult, I am incredibly grateful for the opportunity to be in honors and AP courses. I am especially grateful for being exposed to environments that trigger imposter syndrome as this is a feeling I will continue to experience, but am learning to endure. Throughout my years in honors and AP classes, I have been able to build friendships with peers from different backgrounds. It only took one or two friendships to make me feel welcomed in the classroom.

I strongly hope that students from low-income communities like East Palo Alto realize their potential and overcome the intimidation of entering a classroom with students from affluent backgrounds. Students from low-income communities have a unique outlook because of their experiences that can enrich class discussions and help their peers understand the issues occurring on the other side of the 101 freeway. I hope that students currently battling with imposter syndrome realize their value and the path they are paving for future M-A students from underserved communities. It is long overdue that we live up to M-A’s motto, Strength in Diversity.