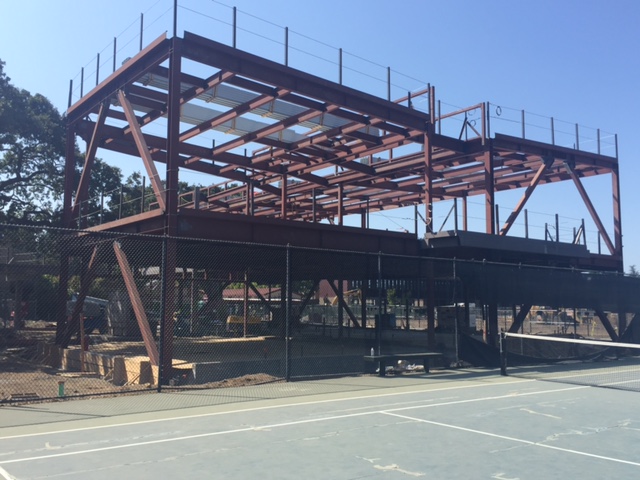 The construction of a new STEM building at M-A has caused a lot of problems for the athletic programs. Not only is the field between the pool and new building unavailable, but the construction has taken the space of one tennis court and inhibits access to the others.

With one less court for practice, the girls’ tennis team has expressed frustration. Because of the lack of available courts, the Bears are not able nor allowed to host any matches this season. Senior Julia Marks explained the situation.

Even worse, the Bears have poor access to the courts and the courts carry an injury risk as there are dozens of scuffs across the playing surface. Tom Sorenson, the Boys’ and Girls’ Varsity Head Coach, expects the renovation of these courts to be a top priority.

“The tennis courts are not suitable to play matches on because they are in urgent need of a repair. There are divots, cracks, dangerous spots and they can’t really be repaired until the construction is over.” 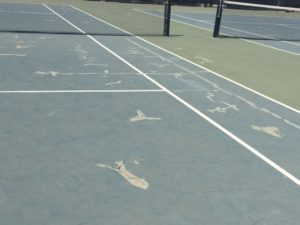 Sorenson added that the courts will undergo remodeling in December to be ready for play six months later.

“We are waiting to have the tennis courts redone until the building is up. They are going to dig them all up and redo them the way they should be. With all of the amenities we should have a state-of-the-art complex,” Sorenson explained.

For now however, the Bears have to cope with the inconvenience. The construction will also have more negative repercussions, as with less courts, a smaller team will be fielded so some Bears may have to be cut.

As the Bears head into their last week of tryouts, they still have a long season ahead. Meanwhile, all eyes are on the courts and whether they will hold up for the next few months. Junior Amrita Bhasin vented her frustration.

“[Sorenson] tells us that if your foot gets stuck in the dents you are going to fall over. [The courts] suck. They are so bad.”

Hopefully M-A can expedite the construction process for the benefit of M-A’s tennis program.