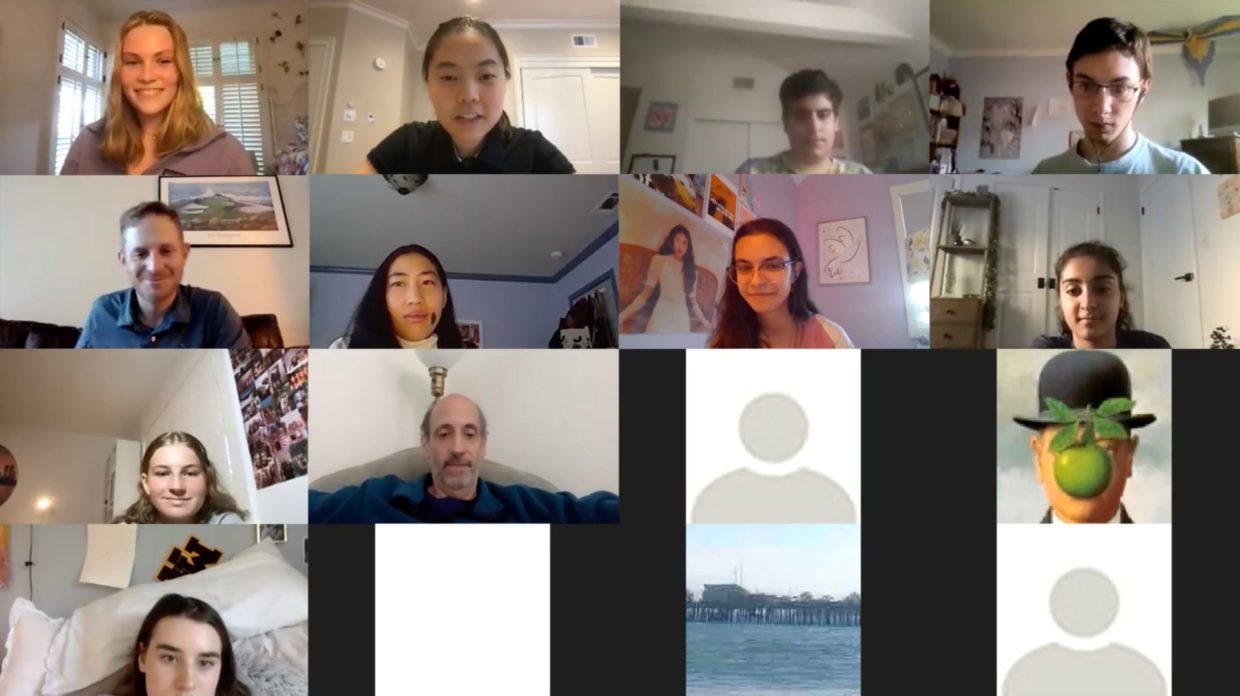 Last Thursday, M-A’s Public Speakers club held its end-of-year event over Zoom, where each member gave their favorite oration they had prepared during the school year.

In the club, members present a speech each month, which their peers give feedback on through Google Forms. In the three weeks preceding the final event, students conducted multiple rounds of one-on-one revision and feedback on their selected speeches.

The club’s president, Audrey Ha, said, “One of the speech elements that we learned in our lessons, such as volume and speed variety, gestures, and eye contact, is the focus of each speech, and thus emphasized on each respective month’s Google Form.” The club’s Vice President, Lara Smarandoiu, elaborated, “Our speech lesson curriculum is based on Toastmasters International’s Youth Leadership Program (YLP), which was designed to help teens develop speaking and leadership skills.”

In Ha’s speech at the event, “Flute, Fumbling, and Fundamental Lessons,” she told a good-humored story about a lesson she learned from her flute performance. Two years ago, she was preparing for her eighth flute Certificate of Merit exam. “I totally got this,” she said she had thought. After laying back, Ha said in the few weeks before her exam, “I started over-practicing. But this only made everything worse because over-practicing made me more exhausted, which made my playing worse, which made me practice more out of panic.”

To make matters worse, she had a brace appointment scheduled one week before C.M. Ha said, “I thought I could easily adjust after they cut a few wires and replaced a few beads. Turns out, they did some major stuff to my teeth.” She said she ultimately passed her exam, but “I definitely did not pass with flying colors. It was more like… walking colors… or crawling colors.”

Ha concluded her experience by saying, “Would I call C.M. that year a success? Definitely not, but would I call it a failure? Not that either. I’d say that C.M. was more of a valuable learning experience.”

When junior Henry Donald was asked to give a speech on a subject he was an expert on, he chose John Hughes movies. He explained that every time he visited his extended family, he made a ritual to watch Hughes’ Uncle Buck. “Uncle Buck is a movie starring John Candy, about an uncle, clearly out of his depth and a very messy person, who must watch his nephews and nieces while their parents are gone,” Donald explained. “The teenage daughter and uncle ultimately learn from each other and come together to form a strong relationship.”

Although Donald said he is most familiar with Uncle Buck, he said his favorite John Hughes movie, and favorite movie of all time, is Ferris Bueller’s Day Off. He explained, “The movie is about Ferris Bueller, a kid in the Chicago suburbs who skips school and pretends to be sick, while he escapes to the city with his friend, who is dealing with an overbearing father. It is an endlessly entertaining movie with great performances from Matthew Broderick and the supporting actors.” Even though he said he has not watched all of Hughes’ movies, he concluded, “Eventually, I will become the singular most knowledgeable John Hughes appreciator in existence, and I think you should all watch his movies, particularly Ferris Bueller’s Day Off.”

In another speech by junior and M-A Chronicle journalist, Jane White, she told a story of the time her poor sense of direction landed her in an embarrassing situation. White explained, “You see, my phone is sort of like my lifeline, and Google Maps is my safety jacket; when the plane crashes, my Google Maps is what is keeping me up.” So when she left her phone to her friends while she was alone at the duck pond, the task of navigating herself to the park where everyone else was, two blocks away, all of a sudden became not so easy.

White said, “I nearly exited onto the 280, but through a moment of bravery, I saved myself and did a U-turn and somehow found my way back to my friend’s house.” She knocked on her friend’s door, and her friend’s dad “caravanned” her to the park, where her friends had been waiting for her expectantly for 30 minutes. The lesson she learned that day was, “Directions may not be my thing, but at least I became acutely aware to never, ever to forget my phone.”

Sophomore Kiana Gholamy said, “Although the Public Speaking Club was virtual this year, there was still a really great sense of community, and it was an overall fun environment to be a part of. It was a lot of fun to showcase all of the various skills we have learned this year!”