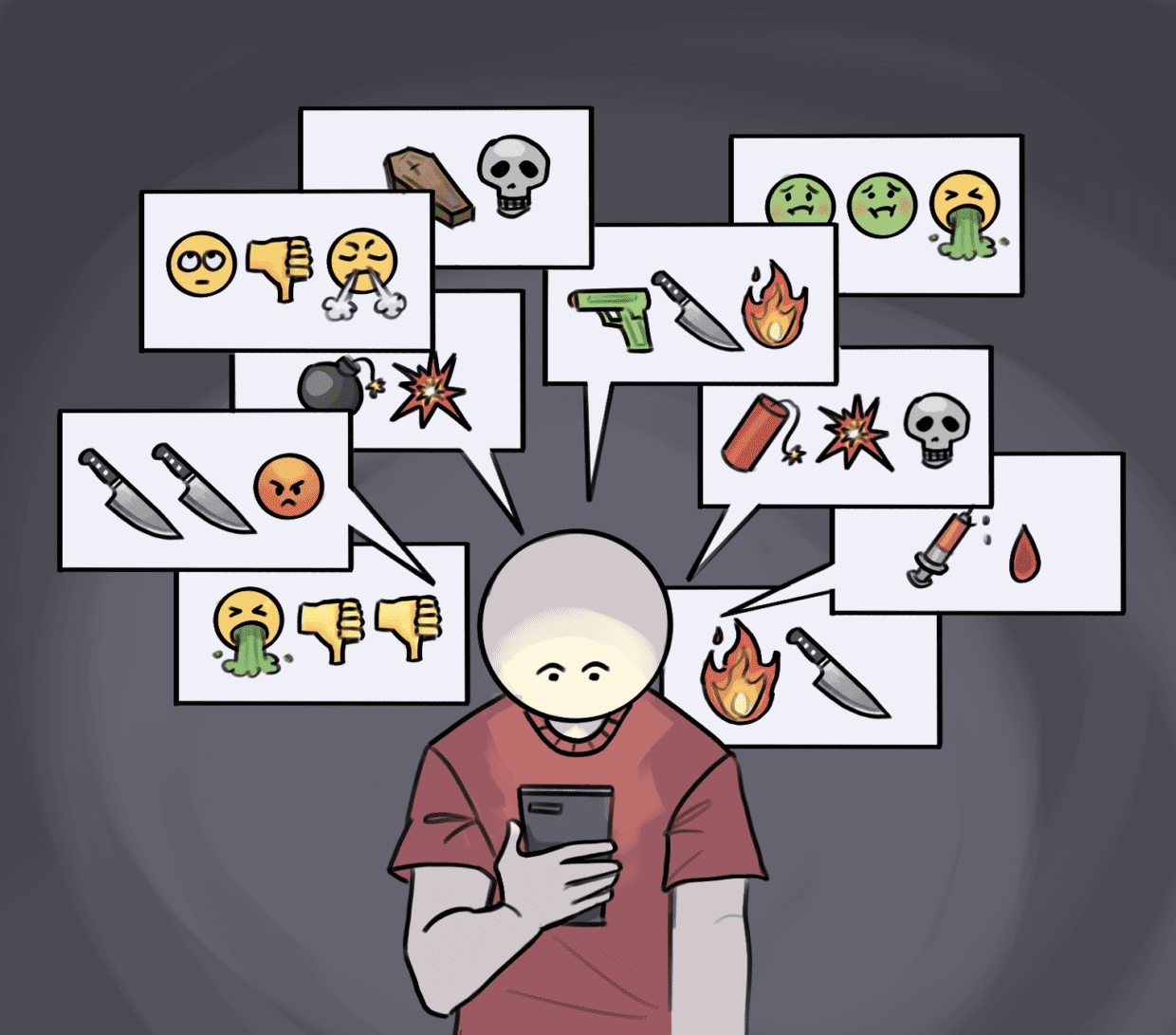 Public Shaming Helps No One

The Editorial Board September 1, 2020

Junior Ally Mediratta opened her phone to 12 Instagram direct messages the day after Kobe Bryant died. She had posted to her Instagram story about remembering his rape allegations in the wake of his death, upsetting some of her followers. In her post to her Instagram story she wrote, “no one deserves to die […] but pretending like his legacy was that of sainthood and strictly amazing basketball achievements overshadows another truth about him, an important one. We can mourn without glorifying.”

While many of the messages she received were from acquaintances who hoped to have a conversation with Mediratta, others stood out as aggressive and unrelated attacks on Mediratta’s personality. Over the following days, Mediratta heard of her post being circulated on a student’s private Snapchat story that she was not able to see. One of her peers, she recalled, publicly denounced her in front of a class she was not in. Eventually, Mediratta began receiving rape and death threats from three Instagram accounts with similar usernames. 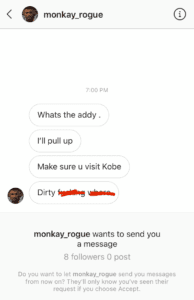 A screenshot of one of the direct messages Ally Mediratta received after her post about Kobe Bryant’s legacy.

Other social media shamings — characterized by public denunciations, a flurry of outraged posts, and viral spread of visuals related to the incident — have affected the M-A community several times this semester. While most in-person interactions regarding her post were respectful, Mediratta explained, “none of them were to the scale that it was on social media.” Some anonymous threats demanded Mediratta reveal her address, making her fearful for her safety. Reading over these messages, Mediratta said, “it doesn’t sound to me like they think I’m being disrespectful. It doesn’t sound like they’re trying to protect [Bryant’s] memory or anything. It sounds like they’re just trying to be violent and rude.” Indeed, anonymity often drives people to display their most extreme reactions on social media — but these threatening messages are a side effect of a larger trend. On social media, those expressing their disapproval of controversial opinions often personally condemn those who posted them. Expanding criticism of ideas to individuals opens the door for harassment and threats.

Another online shaming occurred several days before Mediratta’s post at an M-A basketball game. There, the student manager of M-A’s basketball team wore a durag and walked in a way that some believed mocked African Americans, at one point gesturing over his shoulder and pointing his thumb at basketball players on the court. Another M-A senior filmed the incident and posted it to Instagram, calling it cultural appropriation. Posts began to circulate; while some claimed he was trying to promote spirit and rally the crowd, an overwhelming amount of posts rebuked him publicly, saying the event was “blatantly offensive,” “racist,” and “ignorant.” One post simply read, “Do better, M-A.” A petition to “cancel” the student manager began to circulate social media as well. It read: “[Student manager] is a sexist and racist pig.  […] We’re tired of staying silent.” 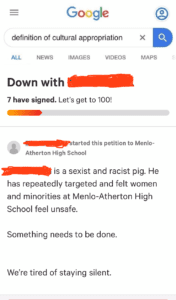 The change.org petition against the basketball team’s student manager.

Losekoot was right: seeing an incident that could have offended African Americans, several M-A students — almost all of whom were white — took to social media for public shaming. While speaking out against racism is commendable, recording people doing problematic things and uploading it to social media isn’t constructive. In actuality, public shamings like this are counterproductive. Public shamings vilify the individual without giving them the opportunity to understand why their actions were hurtful and apologize. Adversely, the subject of the public shaming might be less likely to head criticism because under the guise of raising awareness, public callouts shift the focus of the conversation from the problematic behavior to attacking the individual, which leads to defensiveness. What could have been an opportunity to discuss culture and stereotypes at M-A was overshadowed by an onslaught of social media shaming, resulting in restorative justice sessions to address the incident, according to Losekoot’s email.

Another flurry of outraged social media posts in the M-A community occurred several weeks later. In our winter issue of the Mark, we published an article detailing M-A’s history of race riots. The magazine spread included a photo of a poster from 1967 that threatened violence using the n-word, which we included because it was a shocking visual of how fraught the community was during this time. Despite there being a caption, the poster was offensive to those who were flipping through the magazine; some were outraged by the words and message of the poster. After reading the article that accompanied the poster, many of those who were originally offended felt that it was important to the discussion of M-A’s past.

However, not all responses to the publication of the poster were so understanding. Immediately following Mark distribution several students posted pictures of the poster to social media, sometimes obscuring the caption. As a result, many were confused if the poster’s racist message was something the journalism class or administration was advocating. Still, instead of clarifying this confusion, many continued to circulate the poster online, further taking it out of context. For instance, on Nextdoor, one community member posted the image, saying “I am beyond pissed off can someone please explain why regardless of any stupid project […] they would print something like this to distribute.” 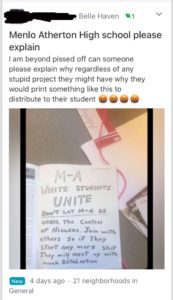 The Nextdoor post condemning the inclusion of a poster from the 1967 Menlo-Atherton race riots in the last issue of the Mark.

The poster was meant to incite an angry reaction directed at the horrible reality of our past, but the rapid spread of misinformation on social media created anger that had nowhere to go. As a result, the anger was channelled towards the inclusion of the poster itself or M-A as a school, overshadowing the article that recounted M-A’s race riots in depth. Instead of serving as an informative visual within the article, the poster quickly became viral within the M-A community, calling for misdirected outrage and denunciation.

Too often people on social media don’t stop to wonder if they have the whole story because, unlike in real life, there are no repercussions if they are wrong. This only makes it harder for real, constructive conversations to take place. Though the poster did genuinely offend members of the M-A community, and some concluded that it should not have been depicted at all, the frenzy on social media distracted from the more important discussion of M-A’s history.

Mediratta reflected that she saw much of the republishing of her post as “the coward’s way out.” In fact, circulating offensive content online, even if under the guise of spreading awareness, may actually incite avoidable conflict. Mediratta also said she suspected that many of the threatening direct messages she received, though not coming from someone she knew personally, originated from those who saw her posts second hand. Similarly, many in the M-A community were offended when they saw pictures of the poster on social media with the caption obscured, but less so when they experienced the poster within its context.

Identifying controversy is exciting, especially when the identifier can act as merely a messenger, therefore avoiding responsibility for the offensive material. This can be especially disastrous when people do not know the whole story or purposely omit vital information from their posts with the intention to elicit an enraged reaction. In cases like these, criticism becomes online harassment, and as harsh comments accumulate, others feel permitted to behave the same way. As outraged posts make their way around social media, strangers can comment on a situation they saw second hand. As they do not personally know the individual they are criticizing, they are often less empathetic in their language.

Moreover, social media users may be able to elevate their own political correctness by denouncing what would be offensive to some — although social media shamers are not actually usually of the group the content would offend. Proclaiming to be outraged by an issue can score virtue points, but in reality does nothing to solve the problem. In all three cases, the backlash on social media became another crisis, leaving little room for discussion about Kobe Bryant’s legacy, cultural appropriation, or race riots. Instead of resolving conflict, such pile-ons actually give more visibility to the provocative incident. While it may feel productive in the moment, outrage culture ultimately distracts from the discussion of an important cause and leads to unnecessary harm.