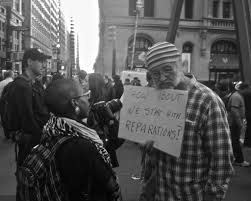 The question of reparations is not new to many universities. While the subject had been broached before, in 2001 David Horowitz, a conservative author circulated a paid advertisement “Ten Ideas Why Reparations for Slavery is a Bad Idea — and Racist Too,” in school newspapers, including the Brown Daily Herald. The advertisement spurred debate on University campuses but outraged many Brown students who demanded that the Herald print a retraction or give up the money received for the advertisement. When the paper refused, protestors stole an entire day’s press run. The theft made national news, but instead of provoking a debate about reparations it resulted in backlash against Brown with the media accused the University of not protecting the exchange of ideas and freedom of the press. However, Brown and other Universities were prompted to investigate their ties with slavery.

In 2003, Brown University began their investigation with the creation of the Committee on Slavery and Justice. Comprised of faculty members, students, and administrators, their main purpose was to investigate and report on Brown’s history regarding slavery and the transatlantic slave trade. Further, they were tasked with organizing public programs to help the University and nation understand the past horrors of American slavery, and decide whether reparations should be made.

After the report was published, the question of reparations arose. In the United States reparations have been a hotly contested issue. On one side, people argue that reparations create a “culture of complaint,” as people blame their current situation on their past, or they distract from present injustices because we are focused on the past. Others simply believe that because it has been over one hundred and fifty years since slavery was abolished that reparations are simply too late and do not pertain to current generations. On the other hand, people argue that “confronting traumatic histories offers a means to promote dialogue and healing in societies that are already deeply divided.” This mentality argues that revisiting our past is the only way to move forward.

Ta-Nehisi Coates’ main argument in his essay “The Case for Reparations” centers around the premise that after being enslaved for centuries and subjected to oppression and discrimination, many African-Americans remain in poverty as a result of lasting effects from the institution of slavery. Coates writes “the Pew Research Center estimates that white households are worth roughly 20 times as much as black households.” Furthermore, he argues that it is more difficult for black children to escape poverty because they are born into families and neighborhoods that have already been unjustly left behind as a result of slavery. Coates concludes that America has not paid its debt back to the slaves or their families upon who’s back the United States was built.

While Brown has acknowledged the ties they had to slavery and disclosed this to the public, they have forgone any other form of reparation. Today the question about how far Universities still have to go when facing their past remains. But can Universities or America make up for their past when many were built or saved indirectly or directly by the institution of slavery?

The College Edifice, today called University Hall, and the oldest building on Brown’s campus continues to show off the prominence of one of the best schools in the country. Yet unknown to many is a reminder of Brown’s ties to slavery since the money for the building was donated by Lopez and Rivera, one of the largest slave trading firms in Newport, and built by slaves.