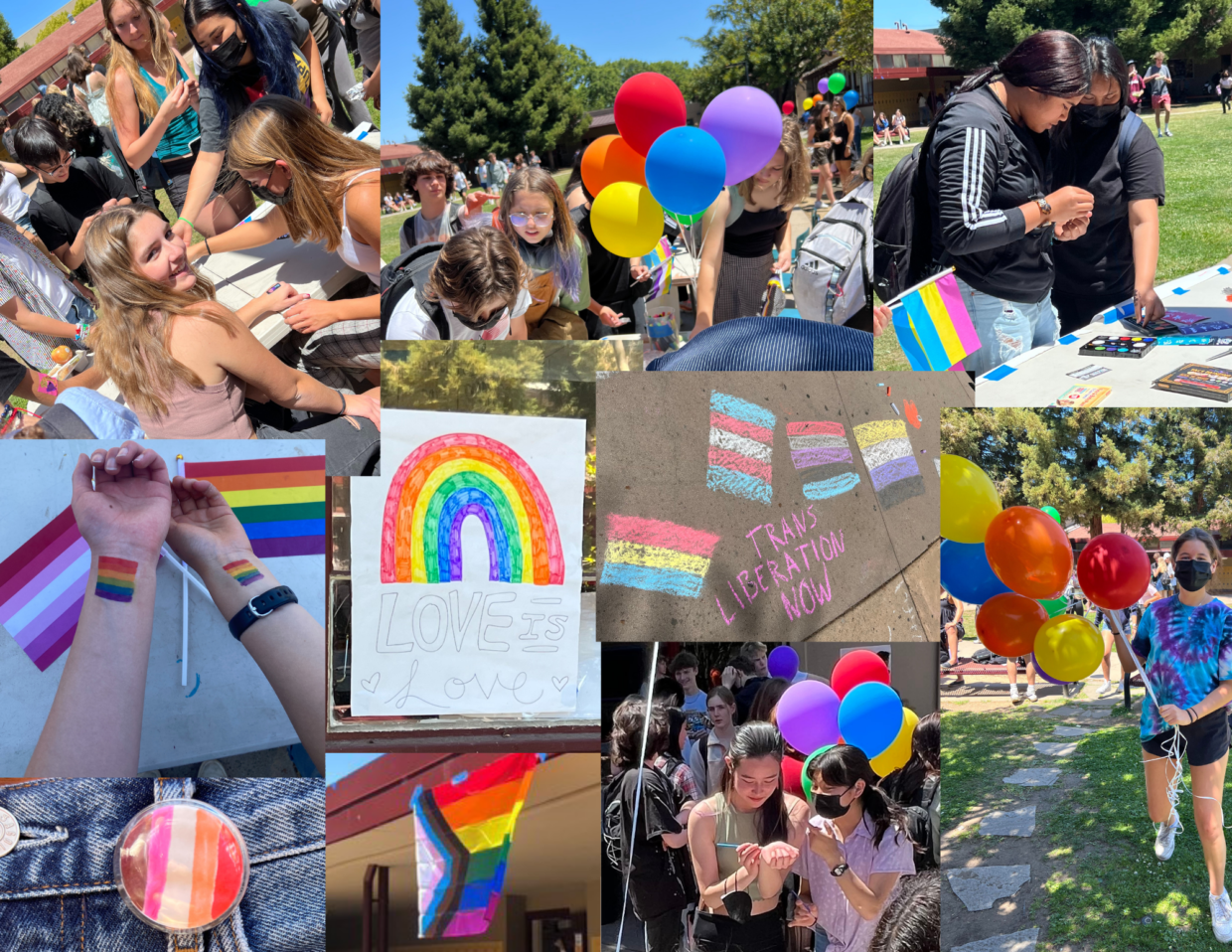 Editor’s Note: The following is a guest opinion from freshman Mira Tian.

Many consider the Bay Area to be one of the more open-minded places in the United States, so why do some LGBTQ+ students still feel uncomfortable with the environment at M-A? This Pride Month, I hope to highlight the experiences and struggles of LGBTQ+ students on our campus.

The statistics show that LGBTQ+ students still face prejudice in school. A 2017 study by the Gay, Lesbian and Straight Education Network (GLSEN), an organization working to end discrimination, harassment, and bullying of LGBTQ+ people, showed that nine out of ten students in California middle and high schools hear homophobic remarks at school. Among LGBTQ+ students, those that have experienced discrimination based on their identity are twice as likely to attempt suicide. In 2021, the Trevor Project found that 42% of LGBTQ+ youth seriously considered attempting suicide.

Despite one’s best intentions to be supportive, some allies can still do things that are harmful to the LGBTQ+ community. Some of these include assuming someone’s sexuality or gender when first meeting them, which contributes to outdated social norms about femininity and masculinity.  Instead of making assumptions, it should be common to ask for someone’s pronouns when you meet them, including in school and classroom settings, such as in beginning-of-the-year introductions. In recent years, more M-A teachers have done this, though certainly not all.

Moreover, school rosters often identify transgender and non-binary people by their “deadnames,” or names they used pre-transition. Intentionally using someone’s deadname disrespects their gender identity, but even doing so unintentionally can be very triggering for people who do not want to be reminded of their past. Making it a norm for students and teachers to learn each other’s chosen names and pronouns makes school a more welcoming place.

When surveyed, LGBTQ+ students at M-A reported feeling uncomfortable in the school environment, often due to peers and even staff. Here’s what they had to say:

Have you heard homophobic or transphobic comments at MA? If so, what were they, and how did it make you feel?

“I’ve experienced misgendering and a lot of comments on my chest and voice. It made me uncomfortable to be at school a lot of the time because I feel as if nobody respects me. Some people say the misgendering ‘is a joke’ and that I am sensitive.” – Henry Bozzuto

“‘That’s so gay,’ ‘Your hat is gay,’ ‘A gay man does that.’ These comments make me think that these people don’t even know that what they’re saying affects an entire oppressed community. They have no idea what they’re saying is terrible.” – Anonymous

Have you experienced or witnessed discrimination for someone’s identity or sexuality in school?

“One of my classmates, after finding out I identified as transgender, insisted on knowing my ‘real name.’ Only one or two people told him to knock it off.” – Leviathan Padwick

“A couple of staff constantly misgender or deadname my friend and call him ‘miss’ and use other feminine terminology for him, even after he corrects them.” – Joey Stout

How has internalized oppression impacted your mental health?

“Some people told me over and over that being bisexual was just a phase and that I shouldn’t try to be different, so I ended up questioning my identity for a lot longer than I needed to. I also continually thought I was just an attention seeker and beat up on myself a lot, which really built up my self-hate.” – Anonymous

“It has made me feel less confident as a person, and I think it’s also made it harder for me to talk to others about my queer identity. Aside from friends, I get extremely anxious talking about my queer identity because I haven’t been able to before and I am still met with the internalized idea that I’m not ‘nonbinary enough’ or ‘gay enough.’” – Megan Lam

“I don’t want to push my pronouns in people’s faces, so I let them use what they assume are my pronouns. I really wish it was normal for pronouns to be asked during introductions, even if people find it annoying. At the same time though, I’m worried if I start a conversation with, ‘what are your pronouns?’ to someone who is cishet [cisgender heterosexual], they’re going to assume I’m just getting them to ask my pronouns back.” – Juni Mitra

The Genders and Sexualities Alliance (GSA) and Leadership at M-A have organized events recognizing queer experiences; these events let people be open about their queerness in a supportive space. This helps normalize LGBTQ+ identities, which can make students feel supported or more comfortable coming out. While LGBTQ+ observances like Day of Silence, M-A Awareness Week events, and Pride Month have their place, that shouldn’t be the only time queer identities are seen and celebrated. LGBTQ+ people exist year round. Being an ally is not a once-a-year thing.

Students in the GSA have discussed what would make M-A more inclusive, such as ensuring that teachers step in to prevent misgendering and harassment. GLSEN found that nationally, only about 14% of students report that their teachers and school staff usually intervene against homophobic remarks at school; to support queer students, M-A needs to break that trend.

Having LGBTQ+ issues and history being taught in class is also crucial to supporting queer youth. The new Ethnic Studies curriculum has made progress on this front. In my Ethnic Studies class, we’ve discussed identities and respect for queer people, and read a timeline about queer resistance and oppression in the 1900s. LGBTQ+ topics should be discussed or read about in other history and English classes too. However, though there are many opportunities to incorporate these in our curriculum, they are rarely included. Books read and analyzed in English classes at M-A don’t have adequate queer representation. While M-A offers a Gender Studies class, often, the people who do take that class are likely already allies; in addition, queer curriculum should be incorporated for all students, not just those who elect to take one particular semester-long class.

M-A’s history with respecting LGBTQ+ students is far from perfect, and we still have a ways to go. It took eight years of advocacy by the GSA for the establishment of our only general neutral restroom that can be accessed by students without a staff member’s help. While we now have that restroom in the upstairs G-wing, M-A still lacks sufficient gender-neutral changing rooms. Currently, there is a single-stall bathroom on the girls side of the locker rooms deemed gender-neutral. Only one person can use it at a time, forcing some students to use a locker room that they are not comfortable with instead. Additionally, activities in PE should not be separated by gender, as it forces people who don’t identify with a single gender to choose a gendered group. This can alienate transgender and non-binary students who can already have a hard time coming out, as this only re-enforces the idea that they will only ever be grouped by their biological sex.

While society may take a while to catch up with being LGBTQ+ inclusive, there is something you can do. Remember that being homophobic and transphobic isn’t funny. It’s just discriminating against someone for something they have no choice over. About one out of five young people are LGBTQ+, so consider how your actions affect your friends and classmates. On a school-wide level, let’s hope we can incorporate things that will make M-A more inclusive. Individually, commit to using inclusive language and interrupting homophobia and transphobia when you see it. You don’t need to know every sexuality or flag there is, but knowing some common phrases and terms would help. If you were unfamiliar with the terms in this article, you should research a bit about LGBTQ+ experiences and identity. Check out the resources below!

For more information about LGBTQ+ identities:

For meeting presentations and other resources from M-A’s own GSA: M-A GSA’s Resources Google Drive