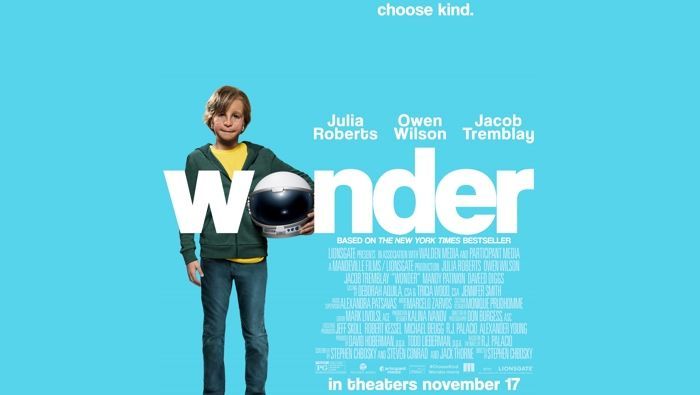 Every time I glanced over at my mom during the film (yes, I went to the theater with my mom; I didn’t want to pay), she had tears streaming down her cheeks. I came quite close to crying as well– this would have been the first time since Rue died in the Hunger Games– because every time I let my guard down, Wonder took its best shot at turning me into a blubbering mess with one of its several heartwarming scenes. By the end, I regretted holding back my tears, because the emotional turmoil Wonder left me in rendered me useless for a couple of hours, only able to reflect on the movie and pet my dog Mochi.

Wonder, based on the novel of the same name by R.J. Palacio, follows the lives of a collection of troubled characters and their relationships to the main character August “Auggie” Pullman. Auggie, played by Jacob Tremblay, is a fifth-grade boy in his first year at Beecher Prep (he was previously home-schooled) in Manhattan. Seems pretty normal, right? Except for the defining description of Auggie’s character: a birth defect leading to a life-long facial deformity. And this is no small scar that you might see on a child who fell off the top bunk bed and needed stitches; no, Auggie’s deformity covers his whole face, and in fact, essentially is his face.

So the movie tells the story of how Auggie, his family, and classmates deal with this condition. Needless to say, the primary conflict in Auggie’s life is bullying– the characters seem to have a harder time accepting Auggie’s appearance than the theater audience, (although this may be the effect of actually seeing him in person). From an outsider’s perspective, it is easy to develop an affinity for Auggie because he is simply a funny kid.

At one point early on in the film, Auggie’s main bully, Julian questions Auggie’s competency asking him if he knows what an eraser is, then rationalizes his mean behavior (“douchiness” is the more colloquial term) by stating that since Auggie was home-schooled he doesn’t know what he has learned. To this degrading inquiry, Auggie fires back by correcting Julian’s pronunciation of the word “supposedly” which he pronounces “supposebly” and quips that maybe Julian himself should receive home-schooling. (I feel compelled to mention that this one-liner resonated with the audience to such a degree that I could hear a whole crowd of kids presumably around Auggie’s age shout “Boom! Roasted!”).

Auggie has a few more great one-liners throughout the film which is representative of the dialogue as a whole in Wonder. For every time Wonder played with my emotions and had me grabbing for an empty popcorn bag to use as an emergency tissue, it also made me laugh constantly at the antics of Auggie and his family and the relatability of many of the characters’ issues.

To that end, the movie covers a wide array of topics, from Jack Will feeling peer pressure for being Auggie’s best friend, to Auggie’s sister Via feeling neglected by her parents because of all the attention Auggie consumes. Even Julian, everyone’s least favorite character, gains some sympathy near the end of the film when we realize that his parents are self-righteous overbearing narcissists who try to leverage their wealth against the principal (sounds like something that would never happen in Atherton…).

As far as the production of the movie, the acting is exemplary all around. It feels like a crime that I haven’t mentioned Julia Roberts and Owen Wilson, who play Auggie’s mom and dad respectively, until this point in my review. Through their performances, I could feel the struggle of the family to support Auggie and how much they wanted Auggie to succeed in middle school and make friends. Even more impressive however was how less experienced actors like Izabela Vidovic (Via) and Noah Jupe (Jack Will) brought to life the problems of the side characters and made the audience actually care about their characters’ problems too (I stress actually here because while their issues are not to be taken lightly, none of the other characters has a deformed face).

The make-up used to create Auggie’s face is quite convincing and the special effects, while quite random, give insight into Auggie’s thoughts. In particular, Chewbacca makes a few guest appearances to help Auggie through school.

Overall, Wonder is a must-see in theaters and a suggested buy on Blueray. I can confidently say that I plan to see the movie again with my brother armed with a box of tissues and a copy of the book which I now intend to read.