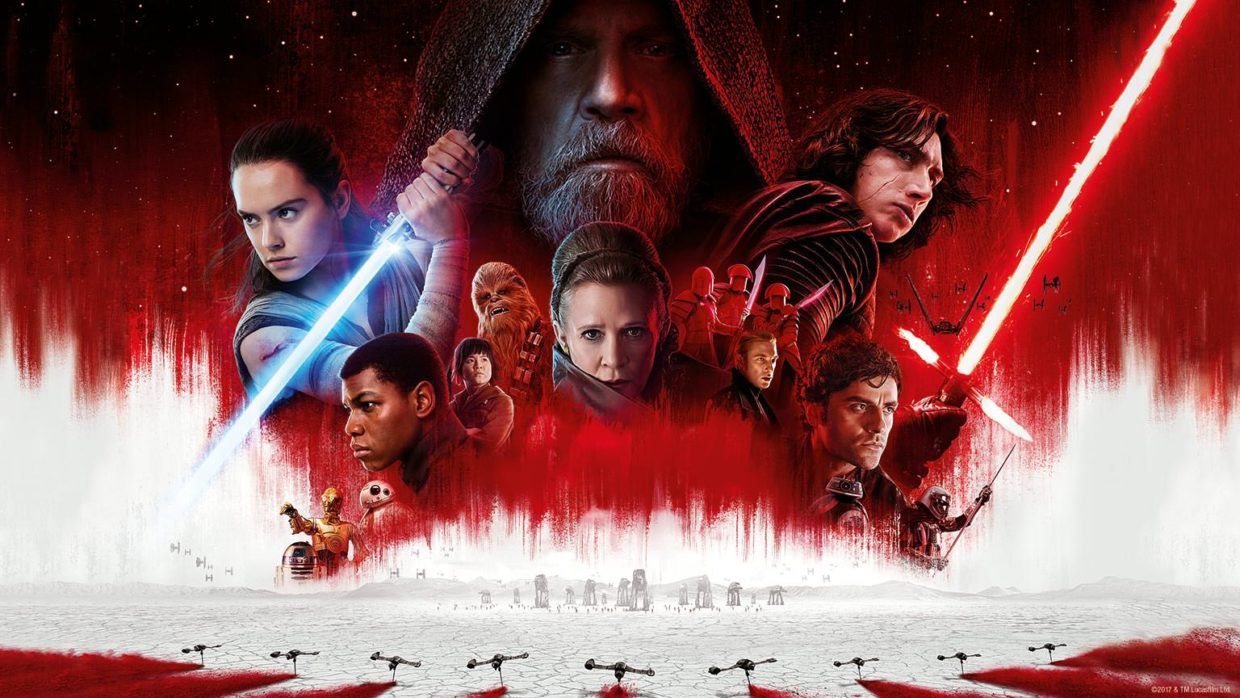 Movie Review: Watching “Star Wars: The Last Jedi” should be the First Order of business

The hype that accompanies every movie from the legendary “Star Wars” franchise trumps that of any other series and yet continues to grow with each successive film. Case in point: my friends and I anticipated that the theater would fill up quickly on opening night and thus reserved seats two weeks in advance–I have mixed feelings about the new reserved seats system at Redwood City Cinemark, but that’s besides the point–but found that the only available seats for our party of 12 were in the front three rows. Alas! However, aside from the minor strain in my neck by the end of the movie, “Star Wars: The Last Jedi” was an enjoyable experience with the movie’s blend of adventure, visual effects, and humor.

One of the most important elements of a film with so much lore and canon is the appearance of its characters. “The Last Jedi” nails its portrayal of all the main characters through great casting and detailed costume design. With Daisy Ridley, Adam Driver, and John Boyega returning from “The Force Awakens” and Mark Hamill and Carrie Fisher reprising their roles from their original trilogy, the chemistry between actors was quite apparent.

Rey, played by Ridley, sports the same ragged brown tunic from her time on Jaku, reminiscent of the young Anakin Skywalker’s attire from the prequels. Rey’s hair is tied into three buns, which–while a very inefficient use of hair ties– contributes to her image as the heir apparent to Luke Skywalker. (After all, every Jedi seems to have a signature hair style, whether teenage Anakin’s rattail, Obi Wan Kenobi’s rugged beard, or Mace Windu’s bald head).

Kylo Ren, played by Driver, ditches the mask featured heavily in episode VII, revealing a prominent scar from his cheek down to his shoulder. Driver’s angsty performance combined with his character’s obvious wound are indicative of Kylo Ren’s inner turmoil. The scenes that include both Kylo Ren and Rey are done extremely well and demonstrate that despite their differences (male/female, First Order/Resistance, Severus Snape doppleganger/looks thirteen), they are very similar characters.

The rest of the lead actors did well to bring to life or further develop their characters, especially Kelly Marie Tran as Rose and Benicio del Toro as DJ. Also, one more costume that can’t go unmentioned is the suit of Captain Phasma–might even be my next Halloween costume. As integral as the human characters are to the story, no “Star Wars” movie is complete without the quirky droids and weird, cute, and disgusting creatures.

C-3PO and BB-8 were fun ancillary characters and BB-9E, a First Order droid, became a hated figure when it snitched out the good guys–very vague but I promised no spoilers. All the creatures served their purpose of intriguing, awing, or charming the audience and without revealing any of the unknown creatures, I feel obligated to discuss the porg, highlighted in many of the trailers.

The porg is cute. That much is undeniable. I went into the movie thinking the porg was ugly based on pictures and its brief cameo in the trailers, however once I saw how the porg acted in the movie, I had to concede that it was cute. Nevertheless, the porg’s cuteness does not excuse the fact that the creature serves little to no purpose in the movie other than to be adorable and thus for merchandising. While this ploy did not make me dislike the movie, the franchise should be wary about making the porg too prominent in future movies because we have seen how disastrous that can be (see the minions from Despicable Me). The porg is cute in moderation but would be overwhelming if featured later in the series.

The plot was engaging throughout the movie, with the viewer never able to feel safe because the Resistance was constantly under siege by the First Order. The film did a beautiful job of branching out into several narratives and switching between each one, all to join the divergent paths by the end of the story while leaving room for conflict in the next installment of the franchise.

The only other complaint I have about “The Last Jedi” is the inconsistency of a couple of characters. One character in particular, which you may notice when you watch, quickly flipped from an apparent turncoat and treacherous leader to a martyr for the Resistance when it needed it most.

However despite this issue and my quarrel with the porgs, I thoroughly enjoyed “Star Wars: The Last Jedi” and highly recommend it for viewers of all ages. While I did not think the movie lived up to the strong standard set by its predecessor “The Force Awakens,” the movie was still wildly entertaining and I would definitely watch it again. For now, I await the finale of this third trilogy of “Star Wars” movies and hope no one comes up with a porg spin-off.