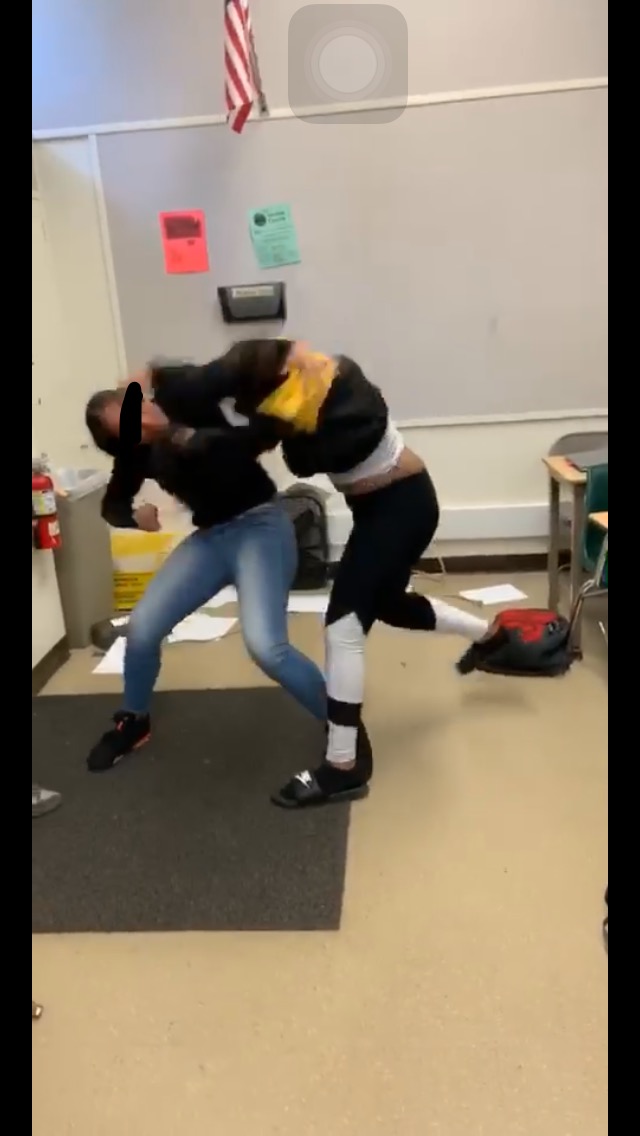 One minute senior Tara Ellingson was walking to class. The next minute, she was pepper sprayed. “All of a sudden, my throat really hurt, and everyone around me was coughing,” she said.

“The fight was wild,” said senior Juan Cortez. “I didn’t really see any teachers around.”

Less than an hour before that, sophomore Paulo Versoza walked into history class, only to “look over, and I see a girl getting slammed into the wall. All I could help thinking was, ‘I have absolutely no idea what to do.’”

Before fellow sophomore Aymeric Mauvais left the room to get help, he observed that “the girl was screaming, saying that she wanted to fight and didn’t want to do it in a classroom” and that “[most] of the students were standing there, shocked.”

The fight and pepper spray incident happened between third and fourth periods near the G-wing on Friday, May 3. Two girls fought in a history classroom taught by a substitute teacher, knocking over desks and ripping posters off the wall, with multiple videos circulating online shortly afterwards.

In response to numerous students and teachers suggesting that this year has seen a noticeable increase in fighting on campus, Chronicle reporters reached out to administrators back in November to provide data that might confirm public perception. Assistant Vice Principal Brenda Bachechi stated that “what we might be seeing is more fights during the school day rather than after school, when the campus is emptier.”

But the perception that this year is different has continued, with videos of fights on and off campus being circulated through Snapchat.

“There seem like more for sure this year,” said G-wing teacher Carrie Moore. Fellow English teachers Leia Asanuma and James Nelson both agreed.

“I have seen more fights this year than in the past,” said Nelson.

Cortez thought there have definitely been more, and Mauvais stated that the fights certainly “appear more violent.”

Just one example was on February 26, when over 50 students gathered to watch a fight in the G-wing after school. The crowd dispersed only after several teachers broke up the fight and tried in vain to shoo students away and get them to stop filming. This incident prompted principal Simone Kennel to state over the loudspeaker the next day that under no circumstances should students film fights.

This week, Bachechi stated that it would be best to have the actual data before commenting on trends.

“I can’t help but wonder what we (the class) could have done better,” said Versoza. “I think that the school needs a brief lesson one day about how to react to circumstances like this.”

We have interviewed dozens of students. Every single one has seen fights this year.

“I think too many people enjoy this kind of thing more than they should. People in the room were videoing it or cheering someone on. That made me sicker than anything else,” said Versoza.