Meet the Team: Making Music from Ravenswood to M-A

According to Google Maps, the K-8 school is a six-minute drive and just 1.6 miles from M-A. At its entrance, a wooden white board proudly displays the red and gold words, Wildcats. Willow Oaks School is one of eight other schools in the Ravenswood City School District (RCSD). After eighth grade, many students head to M-A. Some of them played instruments last year like flute, clarinet, saxophone, and trumpet in their school band.

Freshman Felipe Marginez used to go to Ronald McNair, one of the eight schools in the RCSD. Now at M-A, he drives to school every morning to attend his first class of the day, Concert Band. Marginez has been playing clarinet for approximately one year and three months. He is one of only four musicians to ever graduate from the RCSD and join one of M-A’s band classes.

Four mornings a week, Marginez attends M-A’s Concert Band class taught by Kent Kurrus. Kurrus has been teaching at M-A since 2006, but just three years ago, he became the Music Consultant and mentor for music teachers in the RCSD. There he helped build the district’s music program from scratch. This is the first year in which students graduating from the RCSD joined Kurrus’s bands, two in Orchestra, with Marginez in the Concert Band.

Kurrus has played music since elementary school. He believes that music develops collaboration and benefits certain parts of the brain. He pointed out that some of the “best students academically” are in his band class.

Just like in team sports, band students must contribute uniquely in order to create a performance that flows together. “You learn to work with others. It is difficult to play in a band when you don’t get along with others,” said Kurrus.

He wants the Ravenswood children to have that experience as well. Kurrus thinks that as more students from the Ravenswood bands come to M-A, it is important that we support them and include them both inside and outside of class. He has seen how the school is divided at lunch time. Even though M-A’s slogan is Strength in Diversity, “If you go out at lunch you can see the division. People eat lunch with people who come from the same place,” he said.

Current M-A mom, Andrea Palmer, is helping to close this division as well. She is the president of the “Ravenswood Project,” that began in 1991. This docent program, led by the Mid-Peninsula League of the San Francisco Symphony, helps teach kids about music and gets them ready for an exciting field trip to the SF Symphony. The “Ravenswood Project” is part of a larger project called Concerts for Kids. According to the symphony’s website, they have hosted thirty-minute concerts for more than 35,000 children in North California each year since 1919. They perform five-minute pieces like songs from “Frozen” for elementary students at Davies Symphony Hall.

The “Ravenswood Project” is a musical education program that started out with grades 1-6 at Costaño Elementary School, another school in the RCSD. Now, it includes second and third graders in four of the district’s schools. During six weeks, docent volunteers like Palmer teach and then chaperone the children on their trip to the symphony. “The goal is to give as many students as we can in the [RCSD] exposure to the kind of enrichment experiences that are not as readily available to other students that arrive at Menlo-Atherton,” she said. 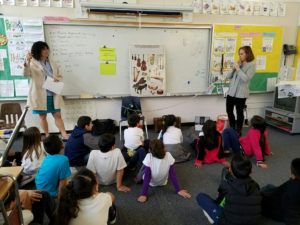 On one of their visits last week, Andrea Palmer (gray sweater) and Shari Conrad (white coat, also an M-A mom), hold the ends of a plastic tube to show the length of a french horn if unwound. Credit: Andrea Palmer.

Palmer is also part of the Symphony’s fundraising program to sponsor the trip. “One of the things that has been a sort of hallmark for the program is that we don’t take them on school buses, we take them on coach buses…It really does make a huge impression on the kids [and] makes it feel like a special day,” she said.

While visiting the students, she has seen the challenges the Ravenswood schools face as they incorporate music into their curriculum. She noticed that they have difficulty getting long-term music teachers. When she “was still volunteering at Costaño, they had like three music teachers in one year. And part of the time [she] would go in, they would have substitutes.”

Palmer thinks that “it’s difficult for the Ravenswood students to get the experience that would really benefit them … Hillview and La Entrada are both big middle schools. They have the abilities and the size to feed a real orchestra and a band. They just don’t have the same structure over there because the schools are K-8 and a really small middle school,” she explained.

According to Palmer, some of the biggest difficulties the children face occur at home. In the bus, on the way back from the SF Symphony concert last year, Palmer remembers how one of the teachers kept pointing out of the window and saying “this house has been remodeled and that one has been remodeled.”

Families are being pushed out of their homes, “some for very trivial reasons like not pulling in your garbage cans in a timely manner and being evicted. And then the landowner charges a much higher amount for a different client because there is so much demand to live in the area … The whole area is being gentrified really quickly,” Palmer commented.

However, the schools, students, and the volunteers are not deterred. Willow Oaks now has a violin program and many other schools in the district have begun expanding their own music programs. Palmer has seen firsthand the concert’s impact on the children and their interest in music. “I know they remember it because I walk on campus, and I’ll see current third and fourth graders come and throw their arms around me,” she recalled. 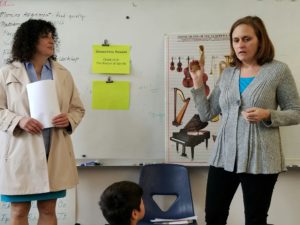 Also for the first time ever, Palmer has noticed a few students who have already started playing instruments before the third grade. She remembered how they were begging to show them to the class,“They have a lot of other stresses, but I do think that these kids are eager and bright and interested, and if they have the opportunities, they can do just as well.”

Although there were plenty of flutes, trumpet, trombone, clarinet, and saxophone players, he didn’t think they had any tubas or string instruments.

While many of the students in his class last year dropped out of band when it was time to go to high school, he continued. Though, it was far from easy to play in a high school band after barely more than a year of clarinet practice. He reflected, “It was just eighth grade not knowing a lot and coming here and it was difficult.”

However, Marginez loves music. “I like hearing music from a clarinet or flute. It just sounds beautiful,” he exclaimed.

At Ronald McNair, students usually used a music book rather than sheet music, and Marginez “didn’t really get how to read the notes and how to count measures.”

At M-A, he is still struggling with performing in front of others. He explained, “The hardest part with the M-A band was the fright, of being scared and not trying to mess anything up.” 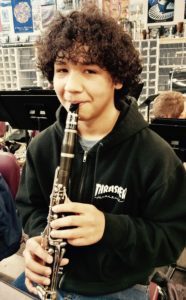 Felipe Marginez looks up and smiles at me after playing a few notes in band class. Credit: Kumali Schoen / M-A Chronicle.

While Marginez loves music and is determined to succeed with the clarinet and many other instruments to come, he is motivated by another reason as well. “I wanted to continue in M-A because my mom likes music, and I just one day want to play for her,” he said.

His musical mother never got the chance to play an instrument when she was a child. She “just really enjoys music and she wants to know what instruments make the different sounds,” said Marginez.

He is determined to make his mother proud and happy because “it’s her dream that one of her kids would play an instrument. I just wanted to be that one person.”

No matter where they come from, whether volunteer, teacher or student, they are all connected by a common purpose — to share the beauty of music with others.

Kurrus, as music consultant, works to provide children in the RCSD a chance to play in a band. This opportunity will develop collaboration skills and help close the division at M-A.

Palmer introduces students to various songs and instruments with the hope they will grow a well-rounded appreciation for it. One day they can soon play an instrument they love.

Finally, Marginez fights his fears and bravely challenges himself in a rigorous band. He will learn more instruments and play for his mother one step at a time.

Palmer concluded, “As long as the third-grade teachers welcome us into the classrooms, we’ll keep going. [The students] are young. They don’t think classical music is stodgy, or that only fancy people can listen to it. They think it’s for them, like any other type of music, and they’re not wrong!”