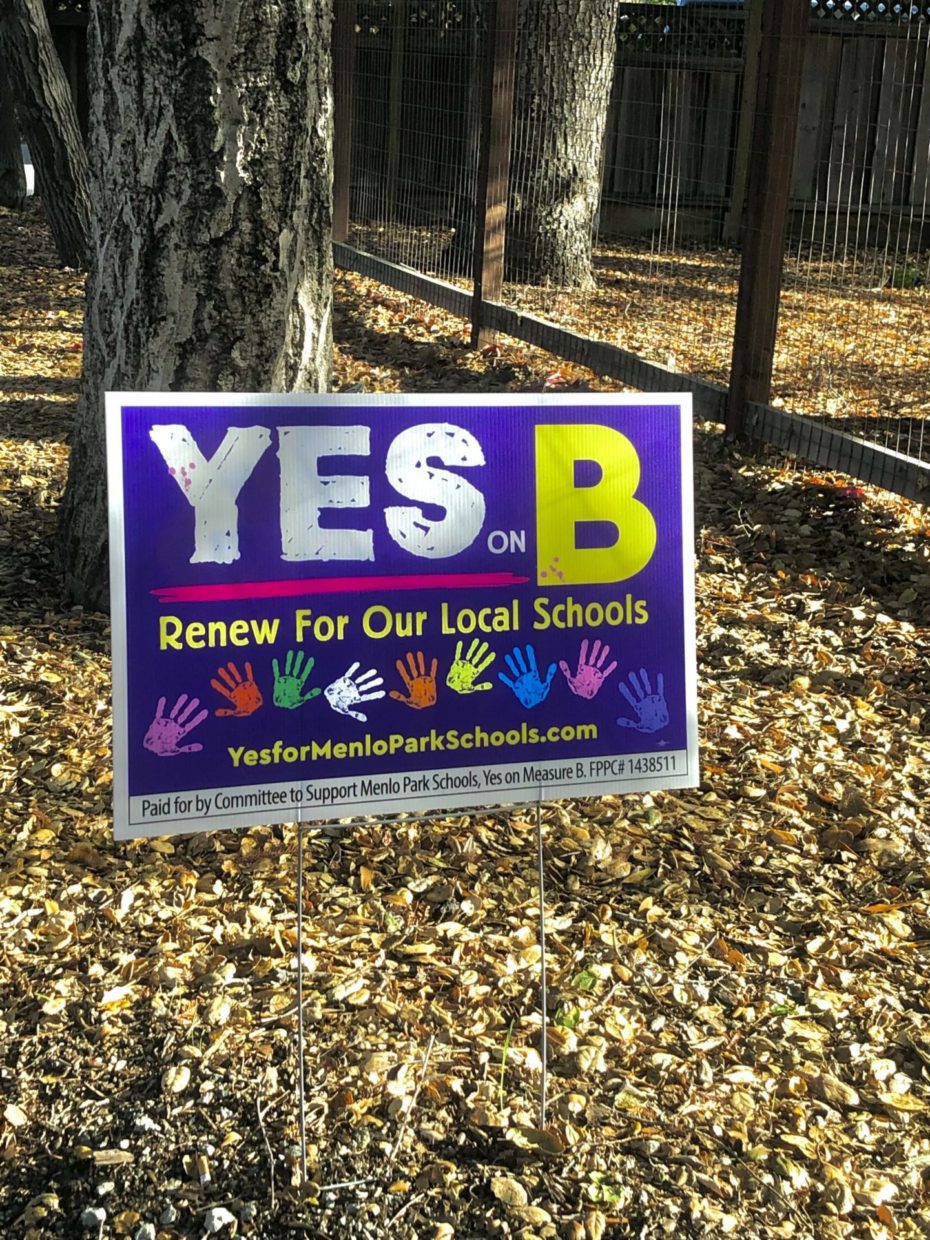 Measure B! Yes, those purple signs that ubiquitously line our streets. On Tuesday, November 2nd, Menlo Park residents voted to renew a 2017 parcel tax to fund public education.  With nearly all of the votes tallied, “Yes” has 74.3% of the vote clearing the 66.7% threshold needed to pass a ballot measure.

A parcel tax is not a tax on your Amazon boxes and letters you get in the mail. A parcel tax is a tax on a parcel of land, essentially it is another form of a property tax. A parcel tax is different because it taxes all parcels at the same amount. Measure B would tax each parcel at $598. This tax would bring in about $4.6 million annually for MPCSD (Menlo Park City School District)

Despite the fact that this tax is somewhat significant, typically homeowners are okay with paying more in taxes to improve local public schools, because good schools tend to raise home values.

The Committee to Support Menlo Park Schools said, “Measure B will enable Menlo Park schools to continue to attract and retain quality teachers; keep class sizes reasonable; support core academic programming in reading, writing, math and science; and maintain the fiscal stability of the district. Without this measure, the district will be forced to make drastic cuts that hurt our schools and decrease our property values. MPCSD has a decades-long history of strong community support for its award-winning schools, and this measure is part of that local commitment.”

The Committee also cites the fact that MPCSD spends less per student than neighboring districts. “The ROI on MPCSD taxpayers’ investment is so good that MPCSD maintains outstanding schools and strong academic performance even with the lowest per-student spending among six highly-desired local districts: Woodside, Portola Valley, Las Lomitas, Hillsborough, Palo Alto and MPCSD. Yes, MPCSD spends thousands less per child than every one of those districts and delivers a comparable and equally sought after K-8 experience.”

One prominent opponent of Measure B was the Silicon Valley Taxpayers Association who is advocating for voters to reject the measure. The association states on their website, “This District is already spending $19,990 per student per year, which is 148% ABOVE the statewide average ($13,489), while providing average education.  Yet, they want more of your hard-earned money to pad their salaries (averaging $106,988) plus up to $13,250 in benefits) and fat pension plans.”

Even though Menlo Park has a history of passing tax increases to fund education, it is still miraculous that over two-thirds of Menlo Park voters approved this measure. Unlike ballot measures in cities like Minneapolis and Austin that were quite controversial, Measure B was always likely going to pass given the voting history of Menlo Park. Now that Measure B has passed, it is only a matter of time until yards can be found ubiquitously across the city again.