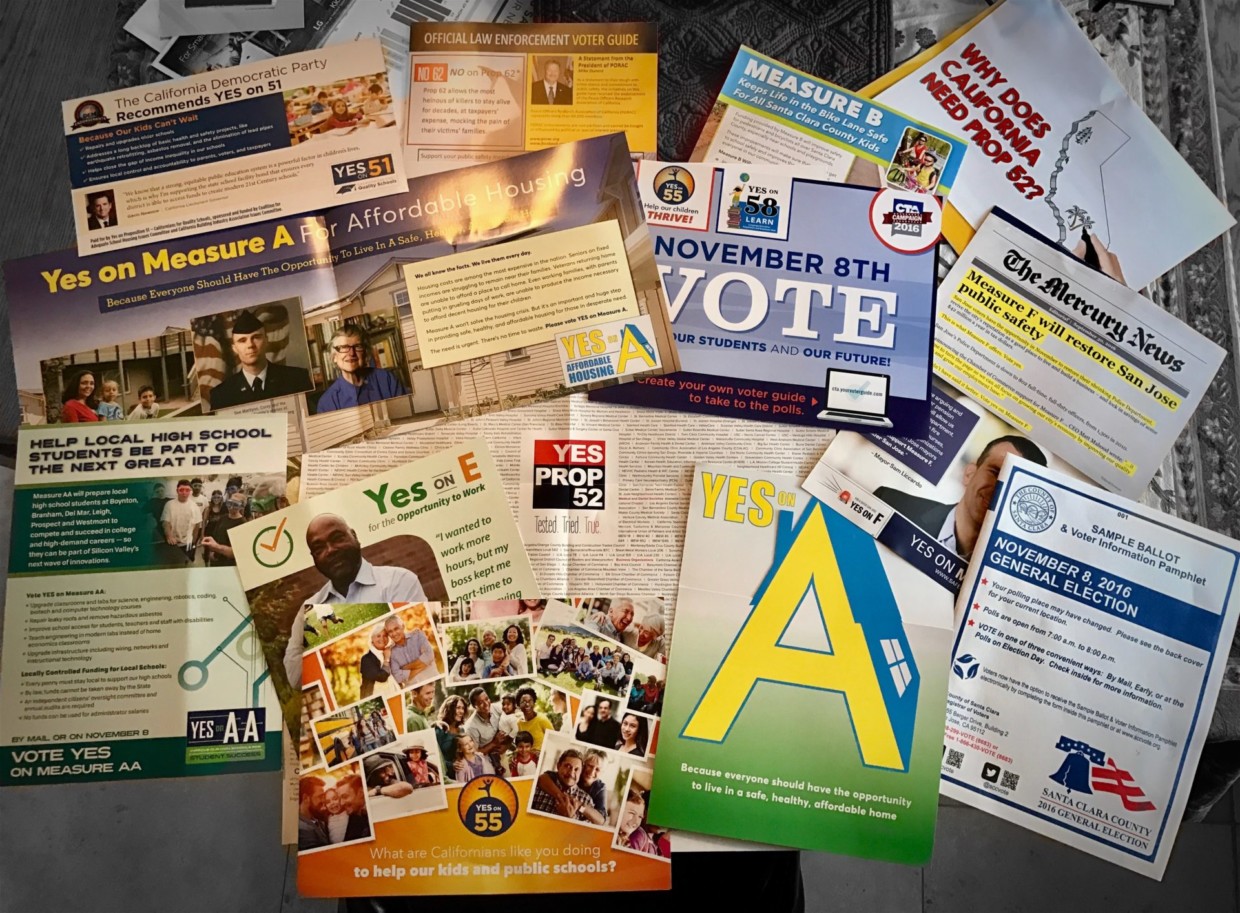 Making Sense of All These Propositions

On November 8, Californians will be faced with a complex ballot of Senatorial, Congressional, local, and presidential elections, as well as 17 propositions.

We surveyed M-A juniors and seniors to find out which of these propositions matter most to the M-A community. Almost 80 percent of responses were from seniors and two-thirds of those surveyed previously heard about some number of propositions that voters will be deciding on in November. The issues that students cared about the most included legalization of marijuana, education bonds, increased background checks for gun purchases, increased parole for nonviolent crimes, and the death penalty.

Proposition 64, the Marijuana Legalization Initiative, would “create a safe and legal system for adult use of marijuana” according to the California Democratic Party, is obviously popular among teenagers.

This proposition, if passed, would enact a tax on both cultivation and retail prices, effectively treating marijuana like tobacco; tax revenue would be used to fund drug research and treatment.

Proposition 51, the Public School Facility Bonds Initiative, addresses education funding, would create nine billion dollars worth of publicly available statewide bonds. Six billion dollars would be allocated to the construction of new public school facilities and the modernization of current ones, with one billion of the remainder going to charter schools and two billion to community colleges.

However, California governor Jerry Brown, in conjunction with the California Legislature, opposes this measure; Brown believes that this proposition would only give funding to privileged school districts before their underprivileged counterparts and enlarge California’s “wall of debt.”

The biggest problem facing voters is not deciding which issues they stand for, but deciphering the often contradictory ballot measures in order to form an opinion. In the words of San Francisco student Byron Hurlbut, a fellow with the Hillary Clinton campaign, “there are two competing [death penalty] propositions on the ballot in order to obfuscate the actual issue. [Proposition 62] would eliminate the death penalty, which makes sense both financially and morally, while [Proposition 66] was introduced afterward by opponents of the former and reduces the number of appeals [given to a person on death row]. If both propositions pass, whichever one has the most votes will go into effect.”

The Safety for All Act, Proposition 63, addresses a pressing national issue: gun control. The act encompasses the traditional liberal viewpoint of the issue by promoting background checks and prohibiting possession of large-capacity magazines. California Lieutenant Governor Gavin Newsom wrote this bill and has support from United States Senators Feinstein and Boxer, while the National Rifle Association opposes it. Proposition 63 represents the enduring conflict in our country between the federal government and the gun lobby, exacerbated by mass shootings and police violence.

Even in these times of fear, division, and violence, there is still hope. In 2014, Proposition 47 reduced some nonviolent felonies to the status of misdemeanors, giving inmates a greater chance of being considered for parole. This year’s Proposition 57, Parole for Nonviolent Criminals Initiative, will reduce California’s imprisoned population by increasing parole opportunities and limiting the trial of minors as adults. The restorative justice approach demonstrated by Proposition 57 proves that the hateful rhetoric and divisive ideologies so predominant in American society will not have a lasting effect on the country.

According to Hurlbut, the 17 propositions on the ballot this year are “incredibly important to shaping the future of California.” The propositions are not only significant to our state but our country as well. Knowledge of these propositions is, therefore, vital even if you are not of voting age, in order to “be a politically educated person” and understand the direction of the United States.