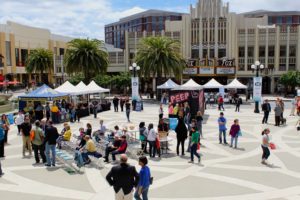 The event took place in the Redwood City courthouse square across from the movie theatre. The box in the middle is symbolic for the transportation of goods and humans.

M-A’s Impact club supported the fight against human trafficking, or modern day slavery, when members volunteered at an event last Saturday, May 14. The event was coordinated by a committee known as “Before Our Very Eyes” and took place at the Redwood City Courthouse Square. One of the coordinators of the event, Pamela Estes, stated that events like this one are crucial to the fight against human trafficking. She believes, “Awareness is the first step to any problem-solving process. As a region, we haven’t acknowledged that human trafficking is local and pervasive.” The city mayor, John Seybert, attended the event and expressed his support: “If [the issue of human trafficking] does not wake you up and grab your attention, you’re asleep.” 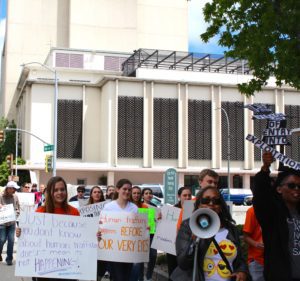 Students from M-A and other local schools lead a walk around Redwood City raising awareness for human trafficking.

Students started by handing out information cards and encouraging people to stop by the event. M-A junior Sara Gerber explained, “I really enjoyed walking around the city and showing that even though I am not an adult and I am still in high school, I can still make a difference.” Shortly after, students walked together around Redwood City with posters chanting different slogans to raise awareness. One of the chants was “Human trafficking no no no! Human trafficking, it has to go!” The rest of the event included a handful of speakers, a dramatic enactment of a new film regarding human trafficking, a panel discussion with professionals, art exhibits, as well as a few videos of survivor’s stories. 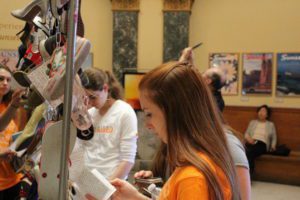 The personal stories and symbolic shoes of those exploited was an emotional and eyeopening experience for many.

Multiple speakers emphasized that anyone can use their gifts and talents to fight human trafficking. These gifts include anything from public speaking to art, and can be used to raise awareness, provide hope, and diminish modern day slavery. Art is seen as a way to humanize victims of trafficking. There were multiple pieces throughout the event. A painted box in the center of the square symbolized the transportation of goods and people. Another piece, this one inside the courthouse, featured a rack of shoes. Each shoe represented a person who was trafficked. With personal handwritten stories of exploitation, this piece of art “was really powerful” to M-A sophomore Erin Cole and many others.

The event brought some shocking facts of human trafficking to light including that it is currently the fastest growing crime enterprise. Human trafficking is a 150 billion-dollar annual industry. There are at least 27 million slaves in the world today. The speakers at the event emphasized that human trafficking is not just a problem for developing countries, but is very much a problem in the Bay Area.