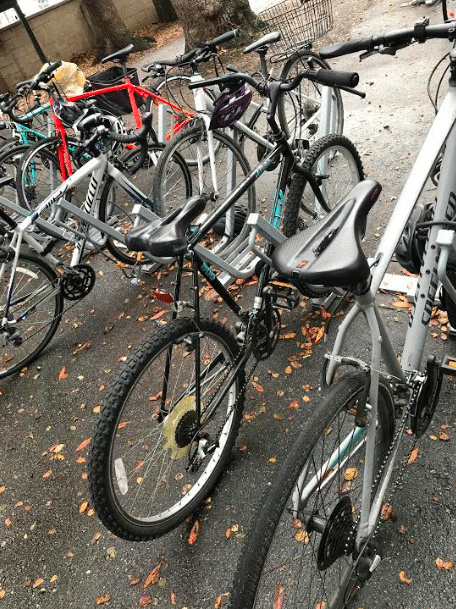 Mr. Nelson Will Fix Your Bike for Free- or Teach You How

M-A’s bike repair service helps the community by providing a free place where students can repair their bikes. James Nelson, an English teacher at M-A, started this to help students with bike problems.

Nelson has loved bikes his entire life; when he was in high school, he and his friend had the idea of starting a bike repair service at his school. By the time Nelson graduated, he knew everything there is to know about bikes. Fast forward to March 2018, and Nelson started his bike service at M-A for three reasons: his love for bikes, getting more kids to know how to repair bikes, and helping the environment by not using cars as much. The bike service really took shape when Nelson attended a traffic meeting, and administration offered him a grant to start the bike repair service. 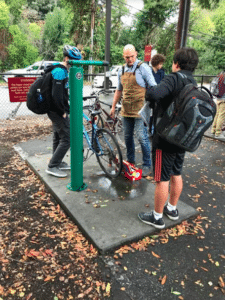 James Nelson in the process of fixing a bike.

All students have to do to get their bike repaired is bring their bike to the bike park at the corner of Middlefield Road and Oak Grove Avenue, where Nelson sets up the service from 3:30 to 4:45 on Wednesdays. Students can either drop it off and leave or wait to learn how to repair their bike for the future. The next day, students pick up their newly repaired bike. Nelson also offers to repair the bike and drop it off at the student’s house. Nelson is able to obtain all of the tools that are necessary from the funds that M-A provides him with.

“So many bikes on campus are completely unsafe, and students just keep on riding them, and that’s what really scares me,” Nelson stated, the point being that most of the bikes that students ride need a repair. The repair could be very small, but as Nelson said, having a fully functioning bike prevents accidents. A lot of people at M-A might not consider to bring their bike to the bike repair, thinking that it would take a long time for them to repair the bike. However, most bike repairs take one day.

According to Nelson, there are students that bring their bikes in for a repair, and sometimes he will not have the one tool that he needs to fix the bike. So he tells the student to come back the next day, but then the student will not show up. Nelson thinks this is dangerous because, “If you are riding your bike regularly, and not putting in two or three hours of maintenance every week, there is a really good chance that your bike has something on it that can be fixed.”

Considering that most people in general do not repair their bikes for years, bike riding can be very dangerous. Nelson has requested a shed to store all of his tools which has been granted, and fortunately, this will eliminate the possibility of students being turned away due to the absence of correct tools. 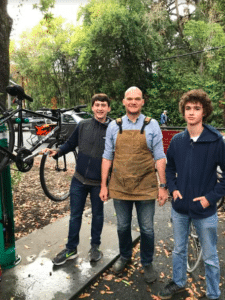 Nelson puts an incredible amount of time each week into the bike repair. Although it is funded by the school, Nelson tries very hard to find cheap parts and tools. “I spend a huge amount of time looking for parts, trying to find good deals on stuff, because we do have a grant, that’s true, but we also try to save as much money as we can,” Nelson explained. Nelson puts in a ton of time to the bike repair, but he receives student help from Devin Leslie and Francisco Larrain. Larrain and Leslie work at the bike repair every Wednesday, helping repair bikes while also learning from Nelson.

As the bike repair service expands, Nelson is always looking for more students to help repair bikes. Students can become involved in fixing bikes by emailing Nelson at [email protected] or just dropping by the bike repair and talking to Nelson about potentially coming more regularly to repair bikes.