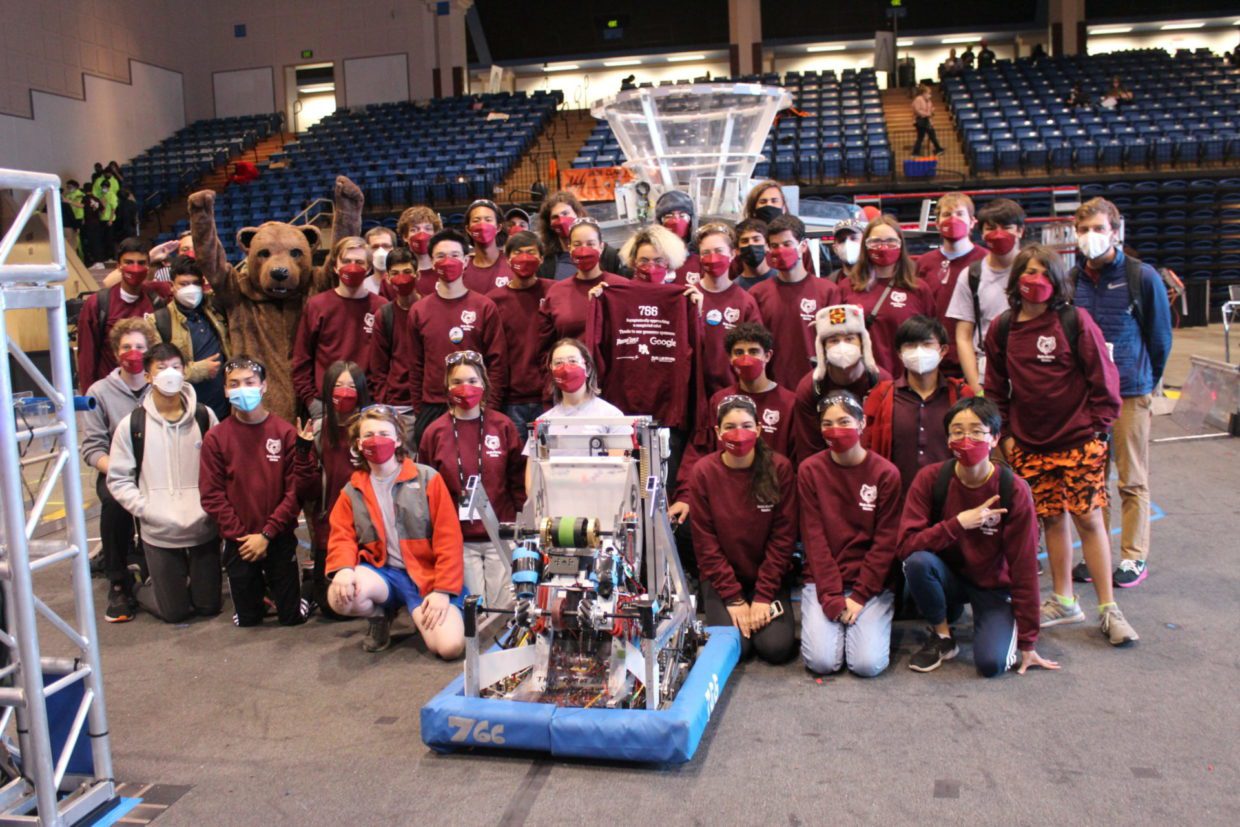 The M-A robotics team, Team 766, competed at the Silicon Valley Regional Competition (SVR) from April 7-10 and placed 4th overall. Their robot, Dwayne the Croc Johnson, was a product of three months of designing, programming, wiring, troubleshooting, and teamwork. This was the team’s first year competing back in-person in two years, with only three members having gone to competition before, and only one member, senior and team captain Tess Buckley, who had been on the team for four years. 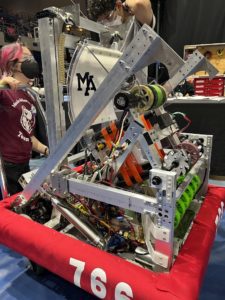 On January 9th, 2022, the M-A team watched, as hundreds of other teams did, the For Inspiration and Recognition of Science and Technology (FIRST) Robotics Competition’s Livestream, which served as the announcement for this year’s ‘game.’ Teams needed to design and create a robot weighing up to 125 pounds and four feet tall that could compete in the game, where teams tried to earn as many points as possible by shooting balls into low and high hoops or using a climbing mechanism to ascend three bars. The five M-A subteams–Computer-aided design (CAD), Machine, Computer Numerical Control (CNC), Electrical, and Programming–set out to work. The team ended up creating a total of three robots this year in order to perfect each of the skills their final robot would have: one with the climbing mechanism, one with the shooting mechanism, and their final robot with both. The team spent an average of 16 hours a week on the robot, with two crunch weekends working for 24 hours straight to finish it. Head of CAD, junior Tommy Knox, said “My favorite personal memory of the season were the crunches. It’s fun to be with your friends at school at 3am in the robotics lab, it’s just a really bizarre and fun experience”

Team 766 has mentors to help them through the process of building the robot. However, M-A’s team strictly adheres to the philosophy of hands-off mentoring. Everything on the robot, from the programming to the assembly, is done only by students.

Many students, like freshman and head of scouting Anna Justice, come into robotics with little to no experience. Justice explained, “The team has a great way for the rookies to learn what to do. We have a Rookie Competition at the beginning of each season where rookies are put into teams and build their own tiny robot. It gives them an opportunity to learn about all the different subteams and what they can do in the team so that they aren’t just stuck looking over people’s shoulders.”

Junior Ron Freeman, head of CNC and electronics, said, “I went into robotics knowing nothing about how robots are made or how robots work. But, something that’s really great is that you don’t need to know any of that–the team will teach you anything, so you can come in not even knowing what a robot is and can learn everything about them”

Knox said, “If all of the juniors–who have the most experience and design expertise–just got together to build a robot I’m sure it would be a great robot. But that’s not the point of the team. The point is to keep teaching the grades below you.” 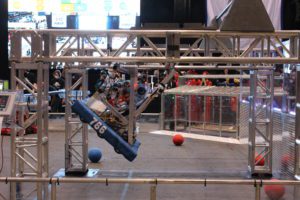 With 35 members of the team and only three competition veterans, Freeman said M-A set out to SVR “not expecting to do very well.” The climax of the competition occurred when, at the beginning of the second day of competition, their robot’s shooter intake–a crucial part of the robot–completely broke before qualification matches. Justice said they “ended up pulling through and doing really well, just focusing on defense by becoming a battle bot and by climbing.”

M-A’s robot became a defense machine. Coincidentally, they had used Brushless DC motors, which turned out to be a lot more powerful than the fastest robot there. The Citrus Circuits, one of the highest ranking teams, was averaging a score of 16 balls into the high goal–when they competed against M-A, they only scored 6.

Justice said, “The competition had great energy because it was just a bunch of nerds having fun, and there are a bunch of fun traditions that happen at every competition. Like, some people will get up and dance to songs, wear costumes, or bring their mascot.”

The team ended the competition on a positive note, making it all the way to the semifinals. Justice said, moving forward, “I’m excited for off-season projects. Even though the competition is over, we aren’t stopping, and we already have projects we want to work on–just not 16 hours a week.” The robotics team is also participating in outreach programs at local middle schools.

To prospective robotic team members, Freeman said, “We’d love to have you and there’s absolutely no knowledge that you need going into it. You can just show up and we’ll figure it out.”