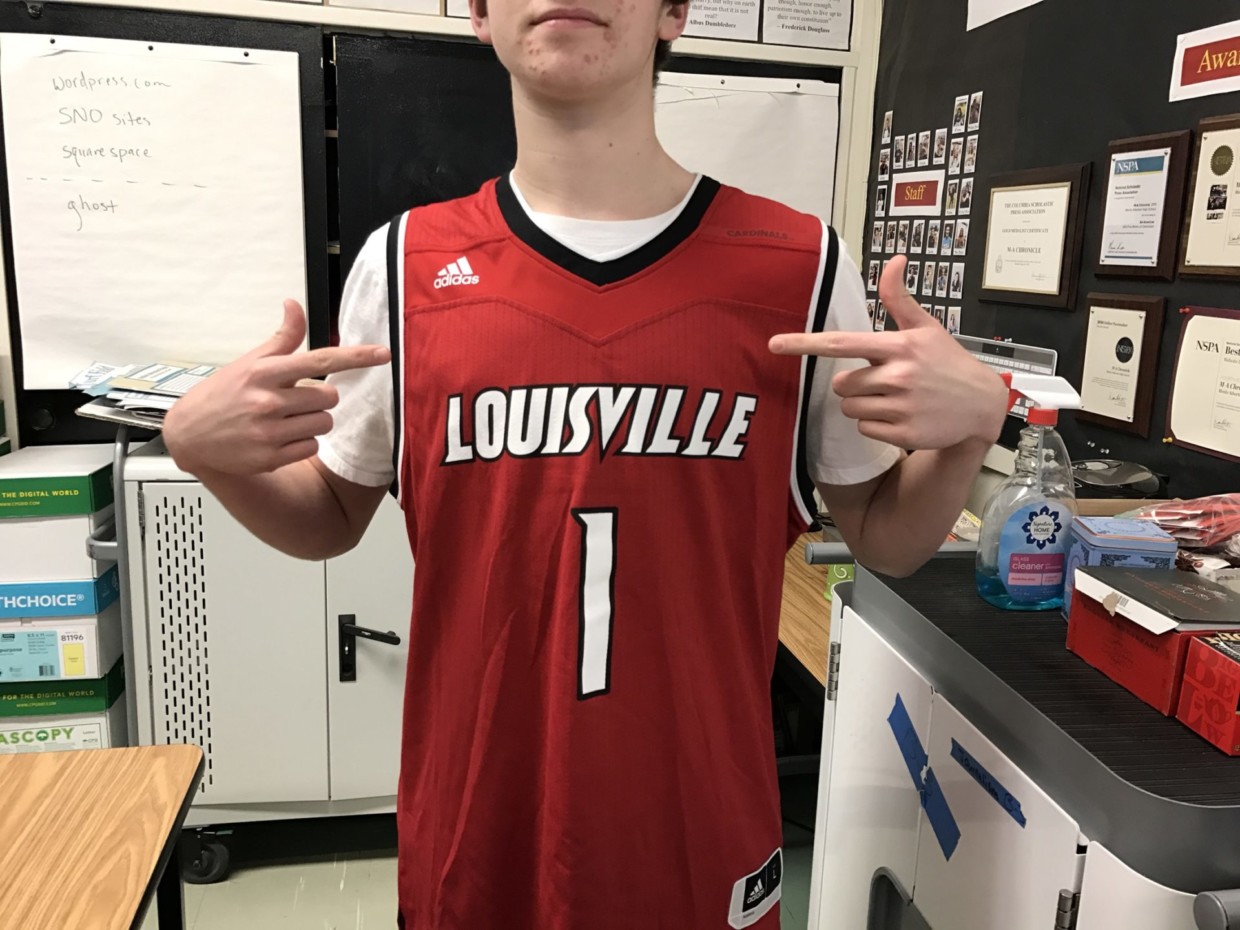 March Madness is officially here. The National Collegiate Athletic Association (NCAA) has picked their 68 teams for the annual College Basketball Tournament. As the best 68 college basketball teams get set to face off in their opening round games taking place from March 16 to 18, sports fans around the country also prepare for the tournament by creating their own brackets and competing against each other. Some students and teachers around Menlo-Atherton took the time to predict their brackets for the M-A Chronicle as they get set to compete in their tournament pools around and outside of school.

M-A Chronicle Staff Member Andrew Tan
Early in the morning, days after Selection Sunday, Andrew Tan was ready to fill out his bracket. On his daily grind in Mitchell Vedar’s first period AP US History class, Andrew eagerly filled out his bracket. 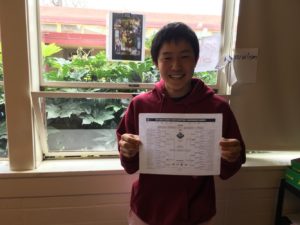 Tan smiles as he shows his bracket off to his first-period class. Credit: John Gardner/M-A Chronicle

Tan said, “March Madness is the one sporting event of the year where people can predict crazy upsets and actually be right. For me, I have Seton Hall beating UNC in the second round. A lot of people have told me that I’m wrong, but it’s not unprecedented and you never know what can happen.” Tan then explained his championship pick: “As for my champion, I picked Arizona because I believe that this is the year that the Pac-12 shows its dominance. This is why I have both Arizona and UCLA in the Final Four, but I ultimately picked Arizona because of ‘the Finn-isher’ Lauri Markannen.” Tan, who comedically named one of his brackets ‘SeTAN Hall’, hopes that his questionable upset picks pay off. 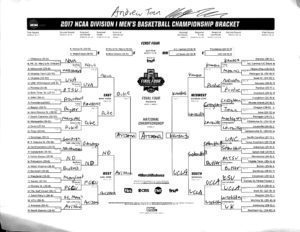 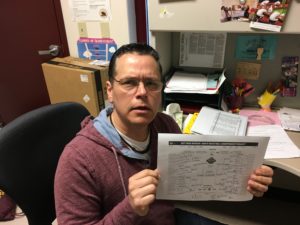 Molieri shares his coveted picks in the security of his office. Credit: John Gardner/M-A Chronicle

Molieri explained his championship pick: “I’m a huge Calipari fan and I believe in the one and done, Go Blue, Go Kentucky.” Molieri’s Kentucky pick is a popular pick as the Wildcats are coming off a Southeastern Conference (SEC) Championship and have won 11 straight games. Molieri hopes that the scoring duo of Malik Monk and De’Aaron Fox along with Kentucky coach John Calipari’s coaching will lead Kentucky to another championship. 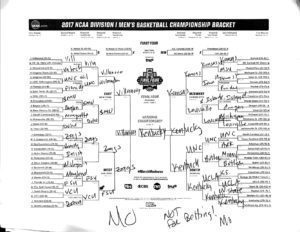 We decided to take a visit to meet with college basketball and Duke University fanatic Brett Kessler. When asked how much college basketball he has watched this season Kessler said, “A very good amount.” A close friend of Kessler, Theo Novak, told us that “Brett’s love for college basketball has turned into a very unhealthy addiction. He doesn’t do much else.” This was why getting Kessler’s predictions was so important to us. After a thorough conversation with Kessler about his upcoming fan fiction that features Duke point guard Grayson Allen and Coach Mike Krzyzewski, Kessler finally offered up his bracket. 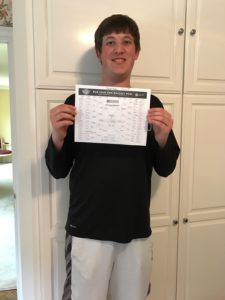 Kessler has only 1 and 2 seeds in his Final 4 and said, “Not many upsets produce a top heavy Final 4.” Kessler believes Duke will have a dominating run through the tournament. He said, “Coach K will solidify his title as the greatest college basketball coach of all time with this NCAA Championship victory.” For the sake of his fan fiction career, he hopes Duke can make his dreams come true. Another friend of Kessler’s, Collin Shen, told us: “For Brett’s sake I really hope Duke goes decently far. When Duke got upset by Mercer in 2014 I didn’t see him for weeks, and I had three classes with him that year! I don’t think he could handle another early upset for Duke.” Kessler told us: “As long as Jayson Tatum keeps playing like a stud there is no stopping my Blue Devils.” 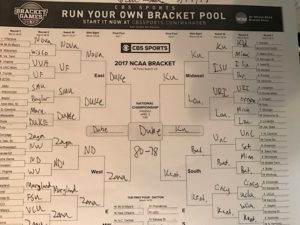 Guiann Lacbayan
Lacbayan is fresh off a successful senior campaign on the M-A varsity basketball team. Lacbayan is running his own bracket pool and is always up for a challenge. The leader of the Baseline Boys gave us 100 percent as he tends to do on the court, on the bench, and in life. 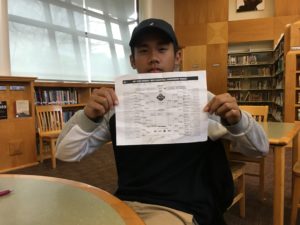 Lacbayan laid out his bracket for us clearly and concisely: “I feel confident with my bracket this year. Gonzaga is a weak 1 seed because of their bad conference and schedule, Zona’s [Arizona] been having an amazing year so far, Baylor will lose early on like usual, Michigan has gone through a lot of adversity, and UCLA has Lonzo Ball. But I think Duke will win it all. They have the talent, the guts, and the game to beat out all 63 other teams.” With Lacbayan’s excitement for this year’s tournament, one would think that he was happy with how the committee decided the field of teams. However, Lacbayan who is a prospective Syracuse University student, explained, “I feel like Jim Boeheim’s Syracuse program has been robbed yet again. Syracuse had more wins against tournament teams compared to the four chosen for the first four and have won 3 games against Top 25 teams. Its blasphemous that Syracuse wasn’t in the tournament. They would have won it all. Go Orange.” 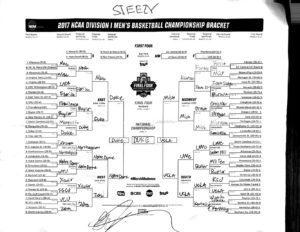 With many of the first round games taking place throughout the school day, many students stress about being updated on the scores while preventing themselves from getting a dreaded Electronic Device Violation. Lacbayan said, “I hope to continue my streak of six years of not getting a phone violation during this March Madness craze.”

M-A Chronicle Staff Member Jake Simon
Simon, an avid sports fan and writer for the M-A Chronicle, is also ready for March Madness. Simon said, “March madness is the craziest tournament in all of sports and I’m excited.” 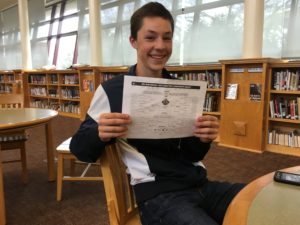 Simon flashes a smile as he expresses his excitement for this tournament. Credit: John Gardner/M-A Chronicle

Simon starting explaining his bracket, “I don’t have many upsets but believe that Middle Tennessee will reach the Sweet 16 along with Wichita St.” Simon picked a very popular national championship game with a matchup of two highly seed teams, Duke vs Kansas. He told us, “I have Kansas over Duke in an epic national championship. Kansas has one of the best players in college basketball in Frank Mason III and alongside Josh Jackson, they will cruise to the Elite 8 and beat Louisville to advance to the Final 4 and then win back to back games over two good UCLA and Duke teams to be crowned national champions.” 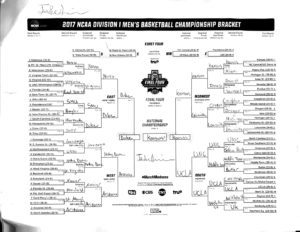 Curtis Francis
Days before the start of the tournament we found M-A’s well-known bandwagoner, Curtis Francis, in the library watching videos of UCLA star point guard Lonzo Ball on his phone. Francis said, “The Ball brothers are the future of basketball.” After hearing this controversial opinion, we quickly offered Francis a bracket to fill out. 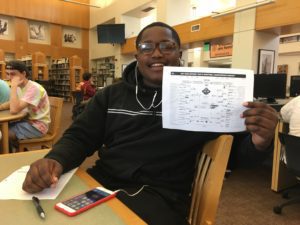 Francis decided that he would go with the UCLA Bruins to win the championship, saying, “Lonzo Ball is the greatest basketball player of all time. He is worth a billion dollars to any company once he gets out of college.” Francis also told us, “I’ve only watched 3 games of college basketball this year, all UCLA games, why would I watch anyone else.” Curtis explained to us that, “Watching games doesn’t really matter when I watch mixtapes of Lonzo instead.” Curtis finished by telling us that: “Even though Lonzo is icy, Lebron is still the GOAT and always will be. Lebron didn’t even need to go to college.” Francis finished, “This is the winning bracket, just watch.” 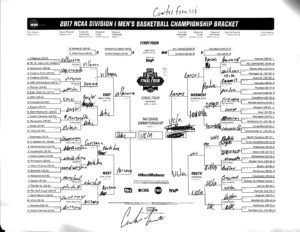 As the tournament begins we wish all of you luck on your own brackets and to those of you at school, we hope that you too can avoid those Electronic Device Violations.